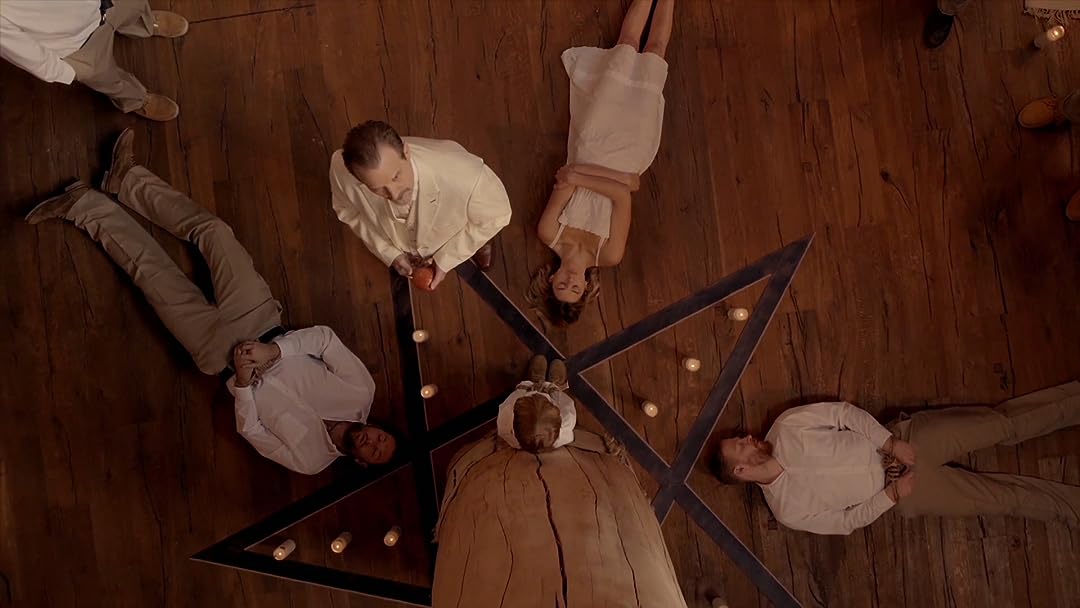 (72)
3.41 h 31 min201913+
When their father is murdered, three brothers descend upon an Oregon mountain river to spread his ashes. After they arrive, one of their children goes missing. One of the brothers was himself abducted 30 years ago when they visited this same river, but he has blocked the incident out of his mind. Only by unlocking the mysteries inside his subconscious, will they be able find the child.

Chris CochranReviewed in the United States on April 19, 2020
2.0 out of 5 stars
Ignore the good reviews: this is basically Tommy Wiseau directing the Wicker Man
Verified purchase
Ignore every good review you see on this movie here, because none of them could have possibly watched this. They must be AstroTurf.

As the title says, this movie is the closest thing we will ever get to Tommy Wiseau directing the Wicker Man. Let's start with the positive parts and then move on to the litany of issues.

*Caroline Vreeland is amazing to look at. In fact, this movie would have been infinitely better if it was just her standing in a stream for the entire run time of the movie. One extra star just for her.

*Let's start with the opening scenes with Michael Madsen. I'll be frank: they exist for no reason. Every function they should have offered could have been performed by a character narrating an off-camera fate. In fact, the filming of the scenes themselves hurt the movie: it immediately tells you who the bad guys, eliminating any surprise about what's coming. It's almost like two different people directed these and the rest of the movie and didn't communicate between the too what the other was trying. They wasted budget casting Madsen and getting the shooting location. It should have been cut out immediately.

*The editing and cinematography are atrocious. Visual continuity is broken repeatedly, common sense segues are missing, and camera angles are amateurishly shot from locations that make no sense.

*The script is horrifyingly bad. It doesn't sound like a person wrote it. It sounds like a sentient plant heard humans talk and tried to mimick what it thought people sounded like. Imagine translating something in Google from English to Finnish, and then refeeding the Finnish back into Google to change into English. It felt like that, but with conversation.

*There's no believable character depth, conversations make no sense, and there's multiple scenes where you will wonder "why did they bother to shoot this, it serves no purpose".

*Action choreography makes no sense. Fights are wooden and alien. It feels like there were no takes and they filmed everything over a very boring lunch break.

*As mentioned above, the film routinely undermines its twist ending by telegraphing all the secrets thoroughout the entire movie.

*And once the twist is revealed... It makes no sense chronologically. You know it's coming, but you also can't figure out how any of it makes sense.

Amazon CustomerReviewed in the United States on March 21, 2020
1.0 out of 5 stars
Can't pause to load video
Verified purchase
It's insane; every video player allows you to pause and wait while the stream is downloading. Normally you'd pause during a slow connection to load up a decent portion of the video you're watching to play for a few minutes before pausing again. Not Amazon! Nope. You only get 3 seconds at a time with no option to pause and load your video. I paid for this? If only there were a disclaimer; I wouldn't have paid for this service. I paid extra, not apart of the prime membership. I rented this either beyond archaic or company convenient streaming video. I want my money back for this unwatchable video.
2 people found this helpful

C F CastReviewed in the United States on May 15, 2020
1.0 out of 5 stars
Pathetic effort to feature someone's latest hook-up
Verified purchase
Michael Madsen isn't in the movie - his cheesy audition is erroneously edited into possibly the worse piece of tripe that can't be compared with anything worse.
Micheal Biehn will always be stuck in Corporal Hicks character roles until the day he dies.
No other actor, male or female
is remotely identifiable or even worth mentioning . .
Oh, wait, wasn't caroline vreeland the big-headed martian girl in Mars Attack? No, wait, that's giving her too much credit - aside from silicon balloons poor girl hasn't a thing to offer.

Baylee SweetReviewed in the United States on May 15, 2020
1.0 out of 5 stars
The worst....
Verified purchase
The worst movie I’ve seen in a long time. The plot is all over the place. The character style/development is awful.... honestly, I wish I could get that 2 hours of my life back.

I’m slightly annoyed with Amazon because the movie says 5 stars when you are on the menu screen... but after reading the ratings... that’s a total lie.

All the reviews that say “great movie, great cinematography.... great actors....” are bots. There is no way and real human person would enjoy this movie.
One person found this helpful

Christine HolmesReviewed in the United States on October 1, 2020
2.0 out of 5 stars
Boring!!
Verified purchase
This movie was boring. The story was all over the place. I really don't know who the main character was. I thought it was Pete but then he died. They never explained what the movie was about. What the sacrifices was about. Then there was the sisters who each ended up with two of the brothers somehow and one sister of the mother of the boy who is to be sacrificed. The movie was all over the place.

Gwendolyn ReeveReviewed in the United States on January 16, 2020
5.0 out of 5 stars
Wild ending!!
Verified purchase
As a big fan of dramas and thrillers, this movie kept me on edge throughout. I could have never predicted how all the pieces would come together in the end. The cinematography was excellent with beautiful scenes across Oregon. The cast had a lot of chemistry and the family dynamic of the different personalities brothers can often have was captured well. Overall this was thrilling without being too scary. I would definitely recommend watching.
3 people found this helpful

Elizabeth L. GomezReviewed in the United States on May 3, 2020
3.0 out of 5 stars
too many unanswered questions
Verified purchase
Was not a bad movie, but had too many questions left at the end of the movie.
What happened to the little Asian boy's sister?
What did they do to the little boys?
Were those women really sisters?
Why did Emma go against her sisters?
Who were those old men and how was the law enforcement involved?

Gotham GoddessReviewed in the United States on May 16, 2020
1.0 out of 5 stars
Disappointing
Verified purchase
There isn't much to say about this movie that is good. I was wondering if it would pick up and if there were some high point in the story that would make sense but no, it's badly written, badly acted and badly directed. There was no plot continuity. Some of the drone shots were nice and the locations beautiful .
See all reviews
Back to top
Get to Know Us
Make Money with Us
Amazon Payment Products
Let Us Help You
EnglishChoose a language for shopping. United StatesChoose a country/region for shopping.
© 1996-2022, Amazon.com, Inc. or its affiliates