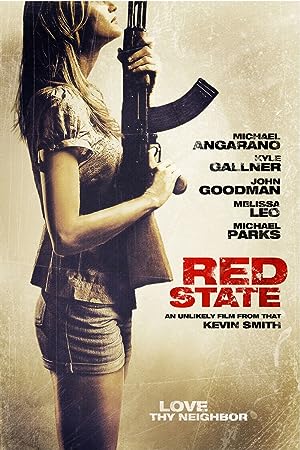 (540)6.21 h 28 min2011X-RayR
See RED STATE before it is in theaters! The abduction of three teenaged boys leads to a guns-blazing standoff between a military task force and a band of fanatical fundamentalists.

RDDReviewed in the United States on December 17, 2019
4.0 out of 5 stars
One of Kevin Smith's Most Inventive Films!
Verified purchase
Kevin Smith’s “Red State” – the tenth film in his directorial oeuvre and the ninth he wrote – takes place in the rural south and portrays a hate church in the vein of Fred Phelps’s Westboro Baptist Church that begins stockpiling weapons while kidnapping men to push an agenda of hate. The story begins with three high school boys traveling to meet a woman from an online dating site, only for her to drug and kidnap them for the church to execute as an example to fornicators. One of the men manages to temporarily escape, find the church’s weapons cache, and makes enough noise for a local Sheriff’s Deputy to hear, leading to the arrival of the ATF. Here Smith draws inspiration from the FBI’s siege of Waco in 1993, showing how the ATF spins the situation in order to storm the compound.

The work represents Smith’s first foray into horror and he handles it well, relying on camera movement and angles to create a claustrophobic environment in the church compound, especially during chase scenes. He handles his portrayal of zealots particularly well, examining dissention within their ranks as well as the inner turmoil they feel amid their religious indoctrination. While this was timely at the time of the film’s release in 2011, it has aged unexpectedly well in the current political climate, given the rise of right-wing extremism. Michael Parks gives an excellent performance as Pastor Abin Cooper while John Goodman turns in the expected great work as ATF Special Agent Joseph Keenan. Kyle Gallner, Michael Angarano, and Nicholas Braun do a good job as the church’s victims, enabling the audience to feel their terror. The film also includes Kevin Pollak as ATF Special Agent Brooks, Kevin Alejandro as Tactical Agent Harry, Jennifer Schwalbach Smith as Esther, and an audio cameo from Kevin Smith.

Fans of Smith’s work will likely enjoy this more experimental work (and, if you’re watching his films in order of release, it makes a good palette-cleanser following “Cop Out”). Though made on a small (for Hollywood) budget of $4 million, he makes the money go a long way and doesn’t waste a single shot in telling his story.

BourbonReviewed in the United States on March 12, 2018
3.0 out of 5 stars
Hard to recommend, and hard to not
Verified purchase
Difficult to say where I stand with this film immediately after watching it, but honestly I think that's what Smith may have been going for.
It's downright unpleasant to watch throughout, which is the point, as it intentionally offers a tough perspective on both cults and the government.
If I were to use a food analogy I'd say it's beef jerky; difficult to chew on but has it's value and serves it's intended purpose well.
7 people found this helpful

Tomboy MamaReviewed in the United States on September 21, 2018
5.0 out of 5 stars
One of the best ending ever!
Verified purchase
I really took notice of Melissa Leo in this film. Since viewing it I have become a fan of her work. The film is creepy from the beginning and shows the dirty sides of both religion and government. It's fast paced and the cast are all amazing although I wish John Goodman would quit getting "one liners" to describe feelings or situations (same in "Flight" 2012). Overall it was insightful and entertaining. The ending was one of the best I've ever seen, a real amusing surprise.
5 people found this helpful

Miss AlexReviewed in the United States on March 13, 2020
5.0 out of 5 stars
One of the BEST movies ever made!
Verified purchase
Absolutely one of the Top 5 Movies you HAVE to see! Brilliantly written and acted, this film shines a truly frightening light on what happens when people really believe beyond reason. Not for the faint of heart, plenty of frights and violence but the ending will blow your mind!
One person found this helpful

James BittancourtReviewed in the United States on September 2, 2011
5.0 out of 5 stars
Cross-in-cheek
Verified purchase
How ironic it is that a movie seemingly rooted in religion can be both violent and thrilling? I think Kevin Smith's "Red State" is a dazzling homage to exploitation film and character study, and it's one that any adult can both appreciate and enjoy. From the opening shot, there's an unsettling, uneven tone that propels the rest of the film along. And there are plenty of twists to surprise the audience.

The primary character seems to be Cooper's Dell: a "compound" is defined as two or more similar substances that can be separated into simpler substances. And Cooper's Dell has a little bit of everything-spiritual hope (in the oddly peaceful scenes within the altar), tension within the population (as characters come and go), and lots of unpredictability. This religious compound is definitely the star, and its' landscape slowly unfolds as we wind our way through its' maze.

Two characters that deserve special recognition: Abin Cooper (Michael Parks) is so down-to-earth and sweet-hearted that you might not see the monster behind the eyes. And Special Agent Keenan (John Goodman), while handling much of the film's plot development, still manages to turn out a fine performance, even as the climax subsides. Both men undergo a "conversion" of sorts--one towards insanity, the other towards enlightenment.

If you've followed Kevin Smith on Twitter anytime in the past year, you'll already know that this film is a departure for him. Believe it or not, it's oddly similar to "Cop Out" (translation: fast, fun, and a complete left-turn). But it does touch close to documentaries like "Jesus Camp" and (gasp) "Waco: The Rules Of Engagement", so there's a shred of truth. It definitely deserves an audience of adults to discuss afterward. If you like what you see after renting "Red State", the story doesn't stop here. You can search for Kevin Smith's podcasts about the making of the film (Google it!) to learn more.

(One note: I watched wirelessly via Roku, renting the HD version. I connected wirelessly @ 7MBps, but was still streaming @ low quality, so you might consider renting the SD version for $1 less if you don't have a speedy connection.)
2 people found this helpful

StyleyReviewed in the United States on October 20, 2020
5.0 out of 5 stars
Excellent!!!
Verified purchase
Amazing movie and was super excited that it even came with a digital download code. The fact that you can’t get the digital anywhere anymore, I was glad the code worked. One of my favorite movies!!!

The Madd HadderReviewed in the United States on July 2, 2021
5.0 out of 5 stars
Crazy people like this exist, very scary....
Verified purchase
***** FIVE STARS *****
ONE OF MY TOP 5 MOVIES EVER (Falling Down, Heat)
Riveting....
See all reviews
Back to top
Get to Know Us
Make Money with Us
Amazon Payment Products
Let Us Help You
EnglishChoose a language for shopping. United StatesChoose a country/region for shopping.
© 1996-2021, Amazon.com, Inc. or its affiliates