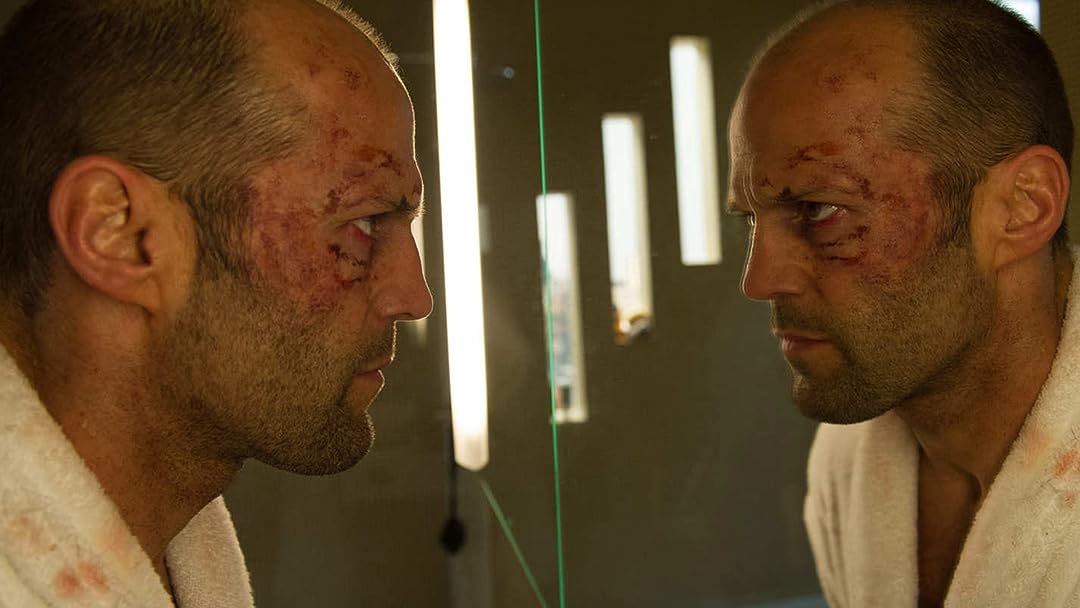 (3,076)
6.21 h 40 min2013X-RayR
Jason Statham stars as a collector for a local mob boss in this high-octane action-thriller! Bent over a friend's murder and fueled with revenge, he sinks into a world of violence.

LULA GREERReviewed in the United States on January 4, 2021
5.0 out of 5 stars
Great story line showing that people are not their SITUATIONS.
Verified purchase
I loved this movie. I only watched it because Jason was in it. My interpretation of this movie is different from what others think off it. I see it from an angle of what the military does to people mental state and they leave them to deal with it the best way they can and I beleve this is the story of a lot of homeless veterens. They isolate themselves because they can not shake the recordings in their memory of what they encounterd in their time of servcie in wars, to keep from hurting the ones they love, and not wanting their famiy to see the anguish they go through mentally. The nun is the same as he is. She just found refuge in a convent, force by the courts, to save herself from herself. This movie shows what true courage looks like to be who you want to be, if only for a short time. While knowing what you are really capable of doing. Do the things that's in your heart to do but at the same time not lying to your self about your inner being. This is a POWERFUL MOIVE :TO HAVE THE COURAGE TO BE WHO YOU REALLY ARE EVEN IF ITS ONLY FOR A SHORT TIME. TO FIND PLEASURE/HAPPINESS FOR A MOMENT IS BETTER THAN NOT HAVING THAT MOMENT OF PLEASURE/HAPPINESS AT ALL!!!!
23 people found this helpful

Craig DavisReviewed in the United States on July 30, 2019
1.0 out of 5 stars
Really BAD movie.
Verified purchase
This is a BAD movie. Do yourself a favor and don't waste your time or money on this one. The first half of this movie is so slow it's better than a sleeping pill. Though the second half is somewhat better with a few decent fight scenes, there simply is not enough action in this snooze fest to label it an action film. To make matters worse, the sound levels are beyond ridiculous. At least half of the time I couldn't understand a word the actors were saying even though I elevated the volume to ridiculously high levels. I've watched alot of Jason Statham movie in the past and liked most of them. This is a cheap B movie with poor production values, really bad rapid fire subtitles and a contrived plot. I'll donate this movie to the local public library long before I'll ever feel the need to watch this piece of trash again.
27 people found this helpful

joel wingReviewed in the United States on November 30, 2020
2.0 out of 5 stars
Try to change up Statham from usual action flick but ruin it with a relationship with a nun
Verified purchase
Redemption features Jason Statham as a former British soldier suffering Post Traumatic Stress Disorder. He’s homeless and drunk on the street when he wonders into an apartment of a rich man who is on an extended trip. That obviously offers him the chance at redemption. The movie tries to change up the usual action movie vehicle for Statham but it couldn’t completely escape that as there are fight scenes. It also ruins everything by including a nun.

The beginning shows a very different Statham. The first time he’s seen you can’t even recognize him with a long beard and living in a tent on the street. Then he gets a chance to change things up and he becomes an enforcer for a Chinese mafia boss and that means it goes back to the usual scenes of Statham beating people up. These are a minority of scenes however. They still mix things up with Statham not forgetting his homeless past. That involves both helping the needy and tracking down someone that killed his friend. Of course there’s the nun. Won’t say anymore but it’s ridiculous. That’s what destroys the already mixed plot.
C

Jason W. YackeeReviewed in the United States on January 15, 2021
1.0 out of 5 stars
Low, low octane
Verified purchase
The blurb for this movie is a flat-out lie. High octane? This movie is slooooooowwwwwwwwww. It contains few fight scenes, little action. It's mostly Statham as a rock-bottom, heavily accented alcoholic before magically transforming, via a squatted London flat and a stolen ATM card, into a natty suit-dresser who, with no MMA moves whatsoever, throws the baddy off a roof into an obviously computer-generated void. Ahhh, but he *does* screw a nun. And attend an art show of penises tied up in ropes. That's pretty cool! Not really. What a dog of a movie. I don't blame JS. He seems game, and the nun is cute without the glasses and habit. But the script and pacing are abysmal. The director and writer should be shot. Or have the crap beat out of them by JS in a real JS movie.
6 people found this helpful

Statham seemingly came out of nowhere to become a sophisticated-looking action hero with the Transporter movie series (and though many did not care much for the sequels, I thought all three were good). He was in films before that, appearing in Lock, Stock and Two Smoking Barrels back in 1998 and Transporter didn’t come out until 2002, but that was the first film I saw him in. He currently has about 39 films to his credit, virtually all of them being action films in which he often makes use of his martial art skills. Like Jackie Chan, normally he does all of the stunt work and fight scenes himself. Wikipedia describes him as having studied Wing Chun kung fu, karate and kickboxing. I am no martial arts expert but to me his style seems much influenced by savate, as he is particularly good with his feet. That, and the look of Transporter had me thinking that he is French, but actually he is British, and Redemption one might say brings him back home, because it is set in London.

Redemption actually has 3 different titles, depending on the region of release: it is also called “Hummingbird” [I am assuming in Great Britain] and “Crazy Joe” in France.

Statham’s prototypical look involves a short, stubbly beard and moustache [like a week without a shave], and a significantly balding head. He usually plays a morally ambiguous character, and when he’s doing “down and out” his hair may be long and dirty. In other scenes he will appear in very well-tailored suits which, with the stubbly beard and moustache creates a quite distinctive look. Compared to the average male action-hero [think Schwarzenegger, Stallone, etc] who were often faulted early on for their lack of emotional expression, their wooden delivery of lines etc, Statham from the start seemed to have more acting talent, as well as genuine martial arts capability.

Then, after Transporter 2 his film career seemed to nose dive disappointingly. Prototypical examples would be “Crank”, "Crank II- High Voltage", and the Expendables series (the first was not bad but II and III got progressively worse). Jason, say it ain’t so—you aren’t going to go the way of Steven Seagal are you?

Thankfully I can say that Redemption is the best film starring Statham that I’ve seen since the first Transporter [admittedly, I haven’t seen all of his films]. In fact, considering the overall thoughtfulness of this material, it’s the best movie I’ve ever seen him in.
It’s not possible to say much about the plot without spoiling it for those who haven’t watched it, but at the beginning of the film it’s obvious that his character had been a British military operative, apparently in Afghanistan along with the other “coalition” forces. After a patrol goes very badly he ends up going AWOL, and at the start of the movie he’s a homeless street person in London, drinking heavily and obviously suffering PTSD symptoms. He regularly visits a free-dinner line with other unfortunates, at which Sister Cristina, a Catholic nun, serves the meals [played by Agata Buzek, whom I don’t think I’ve seen before].

Both he and the sister are struggling, in quite different ways, to overcome past traumas. During the course of the movie they each reveal more of their past to each other, as well as their current struggles to overcome it.

Although this is about 17 years since his movie debut, Statham still can perform quite competently in fight scenes. There are several in the movie and they are well-done, but not unnecessarily gory. And though this is at least one-half action movie, there is no “chase scene” which is usually de rigeur for an action film. The other half is about their internal struggles and their gradually unfolding relationship. As for other “R” type material, there is some swearing, but a lot less than in the usual R-rated action film, and there's no female nudity (there are some black and white photographs depicting male nudity).

I give this film a B+, and am hoping it marks a redemption of Statham’s acting career. I hope he does many more serious films, like this one.

WALTReviewed in the United States on July 6, 2021
5.0 out of 5 stars
JASON S. AT HIS BEST, PURE ACTION
Verified purchase
NO SPOILERS. THIS IS AS ABOUT AS FAST PACED AS THEY COME. MY FAVORITE GENRE IS ACTION AND THIS FULFILLS AND EXCEEDS
ALL EXPECTATIONS. JASONS’ CHARACTER, I.E. JOEY, BEGINS IN THE 🎞 FILM AS A DISPLACED , OUT OF WORK ALCOHOLIC. BUT,
EVENTS TAKE A TURN FOR THE BEST, PURE SERENDIPITY, I.E. GOOD LUCK WHEN YOU ARE NOT LOOKING FOR IT. HE DEVELOPS INTO AN EX SPECIAL FORCES PERSONA, WHO WORKS OUT AND BECOMES INTO PRIME SHAPE. HE WORKS FOR A CHINESE MOB BOSS, AS AN ENFORCER, BUT NEVER FORGETS THE WOMAN, WHO RUNS A SOUP KITCHEN HE ATTENDED. THE FIGHT SEQUENCES ARE BREATHTAKING AND NONSTOP, AND THERE IS A THRILLING PLOT SO THE ACTION HAS RELEVANCE AND GRAVITAS. THIS IS A 🎞 THAT SHOULD NOT BE MISSED. REALLY FOR ADULTS BUT VERY MATURE TEENS CAN VIEW IT. A TERRIFIC DENOUEMENT, I.E. UNRAVELING AND CONCLUSION, SO GET OUT THE 🍿 & THE 🍕 AND ENJOY EVERY SECOND OF THIS GREAT CINEMATIC MASTERPIECE.
One person found this helpful

Amazon CustomerReviewed in the United States on April 25, 2021
5.0 out of 5 stars
Read the reviews before watching it and you will like it if its still a type of movie you like
Verified purchase
Most bad reviews are because of people expecting a different move, not because the movie itself wasn't great. Probably the deepest most engaging reality based movie from him. Forget anything u have seen before, and even the parts where he works for a mobster and is able to fight really well as the trailer shows, have very little to do with the plot. Dont expect an action packed move either. But if you can appreciate real life situations that a movie shows and how it affects lives as well as how people change or struggle with etc you will like it..To be fair its not my favorite type of movie, but I really liked it because it was able to make me engage on a personal level rather than imagination and entertainment we get from cliche Hollywood movies which I also like..
One person found this helpful
See all reviews
Back to top
Get to Know Us
Make Money with Us
Amazon Payment Products
Let Us Help You
EnglishChoose a language for shopping. United StatesChoose a country/region for shopping.
© 1996-2022, Amazon.com, Inc. or its affiliates