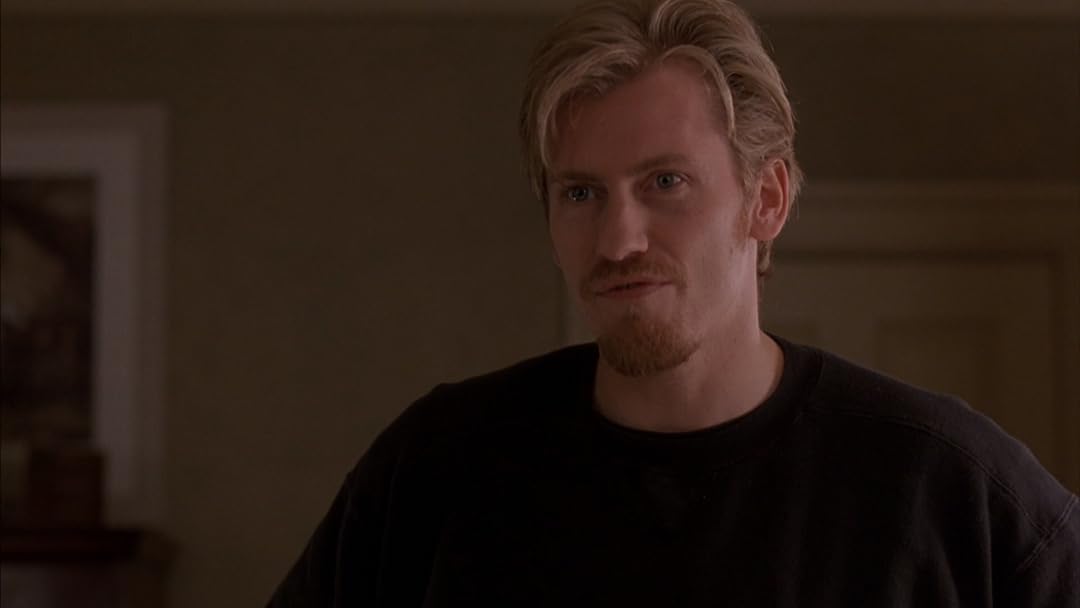 718RubyReviewed in the United States on June 5, 2019
5.0 out of 5 stars
An Unknown Christmas Gem
Verified purchase
Maybe I have a twisted sense of humor, but I think this is one of the most hysterical Christmas movies ever made. While everyone is watching "It's A Wonderful Life" I'm laughing my butt off at a most dysfunctional family gathering for the holiday. It's starts with a hilarious scene in a shrink's office (played by B.D. Wong) and snowballs from there. Denis Leary is brilliant as the disillusioned cat burglar who finds himself playing shrink to the family he's unfortunately kidnapped when a heist goes awry at Christmas. Kevin Spacey and Judy Davis are great as the couple whose marriage is falling apart. Of course the in-laws don't help things. But, in the end, Leary has helped everyone get things "off their chest" so the reconciling (most of it anyway) can begin. A lot of sharp wit and dialog make this a holiday must-see.
23 people found this helpful

CocoReviewed in the United States on October 13, 2019
5.0 out of 5 stars
Fantastic, Highly Entertaining
Verified purchase
I RARELY watch a movie twice, and if I do, it's years apart, but this is the exception. I watch this movie often, each time seeing and hearing hilarious things I didn't see before because they were so subtle. Fun to watch, illustrates the common american man, struggling with HIlary's 30 years of subtle devastating socialism, depicted in a couple trying to make as much money as their in-laws, which they can no longer do because of America's (Hilary's) 30 years of subtle creshendo'ing debilitating socialism, and the theif, who takes a lot of pride in his talent that has gotten him this far in life. The story itself is great because of how exceptionall well executed it is by the 3 main characters, their chemistry palpable, none of their lines delivered unnaturally, and their nuances are subtly hilarious, my favorite genre, subtle hilarity, which is why i can watch it over and over, there's always more subtle hilarity I missed before.
11 people found this helpful

RollTideRoll2015Reviewed in the United States on January 16, 2020
5.0 out of 5 stars
OMG this is WONDERFUL!
Verified purchase
If you love sarcasm in your movies, this is the one for you! It's my annual Christmas move - right up there with Home Alone and Christmas Vacation. Kevin Spacey is at his finest and Dennis Leary is an absolute comic genius in this. The woman who plays the wife, I don't think I've ever seen her in any other movies, was casting perfection. Of course, it's full of F* bombs and others but if you thought Leary was doing a clean movies, that's your mistake! I have recommended this movie to everyone I know - it's so great, I finally broke down and bought it after never being able to find it online. Go ahead, spend the $5 and enjoy it for years to come. I finally shared with my almost adult children this past Christmas and they are die hard fans now too!!! Enjoy!
8 people found this helpful

RebeccaReviewed in the United States on December 15, 2015
5.0 out of 5 stars
"Mary...gag your Grandma."
Verified purchase
It's that time of year again and when I pulled out the Christmas movies this was the first one I wanted to watch. I think this is probably my favorite Christmas movie of all time, and even though I've seen it so many times I can practically recite it, it's still hilarious.

The synopsis is pretty simple - Gus, a washed-up cat burglar (Leary), gets into a snafu when he attempts to rob a wealthy house in a small town in Connecticut on Christmas Eve. He ends up on the run from the police, and in desperation kidnaps what he thinks is an average suburban couple - Caroline and Lloyd (Davis & Spacey) - and forces them to take him to their house while he figures out what to do next. Caroline and Lloyd are, of course, as dysfunctional as they come - on the brink of divorce and deliciously nasty to one another. And, since it's Christmas Eve, the in-laws are coming to dinner - hostage situation or not. It's family dysfunction at it's best, and anyone who has EVER suffered through tense family dinners, dreaded holiday get-togethers, or had the mother-in-law from hell can probably relate to this movie.

I'm sure I'm dating myself my saying this, but I remember Denis Leary's early stand-up days and I always thought he was funny. There's something about that sarcastic wit combined with angry rants that just leaves you howling with laughter. Add Kevin Spacey (pure genius), Judy Davis, Christine Baranski (Sheldon's hilarious mother on Big Bang), and Glynis Johns and you have the makings of one the sharpest, funniest movies I've ever seen.

No, this is NOT a family-friendly Christmas movie. This one is purely for the grown-up table - and a table with more than a few empty wine bottles at that. The humor is very dark, the characters are very sarcastic, and the dialogue is sharp, biting, and liberally laced with profanity. You'll know in the first five minutes whether or not you'll like this movie with Caroline and Lloyd's marriage counseling session - I'd quote my favorite lines but none of it would make it past the sensors, lol.

But underneath all the sniping is a VERY heartwarming movie about the best and the worst parts of the most important thing of all...family. There's a delightful twist to the end (which you will see coming a mile away), and I swear this movie fills me with more Christmas spirit than Miracle on 34th Street and the Muppet's Christmas Carol combined.

Love, love, LOVE this movie. Highly recommend it to anyone who likes dark humor, can relate to dysfunctional families, and gets a kick out of Christmas movies like Scrooged and Christmas Vacation.

**NOTE about the DVD - it's a terrible transfer, and the newer your TV the worse it's probably going to look. For some reason the "widescreen" doesn't fit the TV screen (tried it on three different TVs and it was the same on all of them). It's stretched across the screen with black bars at the top and bottom. The only way to make it "fit" is to zoom it, which makes it even blurrier. I wish there was a decent transfer available, or better yet a Blu-Ray copy, but this movie is SO GOOD that I'm happy to take what I can get. The picture may be strange, but it's better than not having it at all. I can't imagine my Christmas without "Excuse me, excuse me, EXCUSE ME!! If you don't mind, the corpse STILL has the floor!" lol!

KikiReviewed in the United States on December 14, 2020
5.0 out of 5 stars
Snarky, funny, and Denis Leary doing his thing
Verified purchase
Before we all knew how awful Kevin Spacey is, there was The Ref. For those of us who break out in hives at the thought of watching a Hallmark movie during the holidays and drink to cope with family dinners, The Ref remains a gem of a movie full of Denis Leary snark, family dysfunction of all varieties, and the wonderful shrillness of Christine Baranski. You know who you are. If you haven't seen this movie yet, go ahead and do it before it disappears like Spacey's cred in Hollywood.
5 people found this helpful

halloweenfreakReviewed in the United States on December 5, 2020
5.0 out of 5 stars
A staple for any movie collection!!
Verified purchase
This is comedian, Denis Leary at his best. Given it’s his first feature length film co-starring with Kevin Spacey, Judy Davis and Christine Baranski about a house thief who gets away by taking hostage a married couple battling through their own marital problems on Christmas Eve. A hilarious comedy with a great storyline and ending in the spirit of Christmas. A must own!! Ordered this from a seller in great used condition and arrived quick in the mail.
4 people found this helpful

Zen FinderhornReviewed in the United States on December 21, 2020
2.0 out of 5 stars
Very unfunny Christmas film
Verified purchase
The version I got was a letterbox format. So you had to zoom it in order to make it fill the screen. Once zoomed, the picture looked okay. The film itself was a real BOMB. I don't see how so many people thought it deserved five stars. Take it from me, don't waste your time. The main problem, despite a fairly good cast, is that the script is NOT funny at all! The dialog is not even interesting let alone amusing. If you want to see a good picture about bickering spouses, watch "Who's Afraid of Virginia Wolf." I am so sorry that I bought this DVD!
2 people found this helpful

JenniferReviewed in the United States on January 22, 2020
5.0 out of 5 stars
hilarious Christmas movie
Verified purchase
The Ref is not for all audiences and is certainly not for children. They swear a lot during this film. However, I find it to be a hilarious take on Christmas and all the stress that comes with one. The actors, Leary, Spacey, Judy Davis are all perfect for their roles. This is my go to Christmas movie whenever it all becomes too saccharine for me to stand.
5 people found this helpful
See all reviews
Back to top
Get to Know Us
Make Money with Us
Amazon Payment Products
Let Us Help You
EnglishChoose a language for shopping. United StatesChoose a country/region for shopping.
© 1996-2022, Amazon.com, Inc. or its affiliates