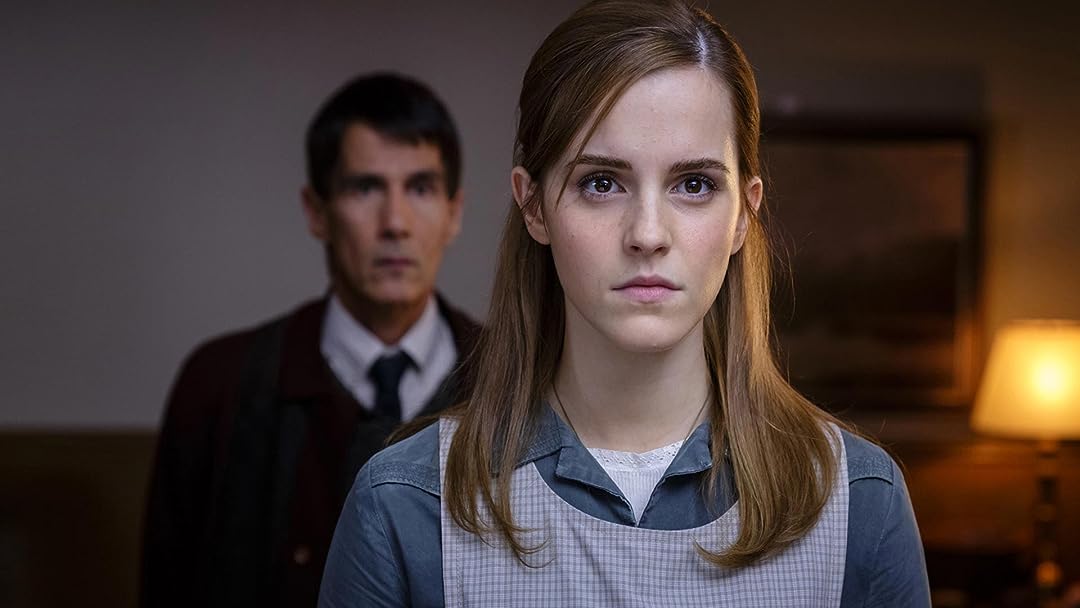 Emmanuel VerasReviewed in the United States on September 14, 2019
1.0 out of 5 stars
Satanism and Pedophilia Apologetics
Verified purchase
Given the #MeToo revelations, it's a bit ironic that this is a Weinstein Company production. Features a pedophile cop whose transgression, sleeping with a vulnerable child, is mere garnishing for the inordinately gross violation that crying wolf is framed as.

To redeem themselves for this mess, Weinstein Co. should make a film about how Jeffrey Epstein got leverage over people.

Aiex HaloReviewed in the United States on October 18, 2020
1.0 out of 5 stars
Takes too long to get to any point
Verified purchase
It's kind of hard to spoil this film since it is based upon "true events", then opens up with a case of an alleged "satanic ritual rape and murder" as part of the "Satanic Panic" that dominated the 80s.

The "Satanic Panic" was not at all justified, and the whole alleged string of satanic cults and satanic murders in the 70s and 80s were proved to be hoaxes or otherwise not related to satanism in any way. As such, if this film is claiming to be based on "true events", and in particular on a "regression therapy" which looks and sounds to me exactly like Hollywood hypnosis, you can tell nothing good is going to come of this.

This film decides to play it straight, with the vast majority of it being taken upon as an actual investigation into an actual satanic cult rape and murder, with a girl Angela claiming her father and grandmother and some other people were involved. The father turns himself in and confesses despite not having any memory of it.

The police employ a psychologist who starts using "regression therapy" to try to get the father to "regress" to the night he supposedly raped his daughter, whereupon more information comes up that implicates another police officer. From here, officer Bruce Kenner starts having nightmares or otherwise visions of the satanic ritual rape and murder as described by Angela. He listens to an interview conducted with her repeatedly, to the point of memorizing every word of it.

For an excruciating period of time, very little actually happens in the film, as Bruce interviews person after person, the Satanic Panic makes the news night after night, and the already weak case seems to stall to nothing.

Then suddenly right at the end, during a scene or maybe an hour after a scene in which I had nodded off or gotten distracted and missed it, Bruce somehow realizes that one of the Satanic Cultists in his recurring nightmares is actually a woman in a newspaper ad. From there, he somehow comes to the conclusion that the entire cult is nonexistent, and Angela had been lying all along.

A confrontation with Angela later confirms it, but without any evidence and his word against hers, there's nothing he can do. Angela's father refuses to believe it and insists upon pleading guilty despite the fact that he didn't do it.

All of this happens in literally the last 15 or 16 minutes after more than an hour of otherwise plain and boring nondescript police procedural horror with no evidence and no witnesses.

If this was trying to have something to say about the "Satanic Panic" of the 80s, it took an awful long time to say very little, if anything. If it was trying to be a mystery, it gave us literally nothing in terms of any threads or evidence to follow. If it was trying to give some cheap thrills and scares, it failed even in that.
7 people found this helpful

ZOMGPWN❗Reviewed in the United States on August 23, 2017
3.0 out of 5 stars
This is a tough one...
Verified purchase
This is a tough one. There is so much to like about this film... and then ultimately... so much to feel "meh" about. If you watch the trailer you might be led to believe this is a supernatural thriller/horror film couched in a police procedural. Well... sort of. Without giving away the "plot twist" I can just say that where this film seems to be aiming is not where it hits home. That's fine as long as the true target is something compelling and/or intriguing. For my wife and I, this one wasn't.

Director Alejandro Amenábar, whose most well-known work to date is The Others, is absolutely a talented director. This film is gorgeous with some really compelling cinematography as well as set & costume design. Almost all the actors are fantastic, led by the always reliable Ethan Hawke. He gets some serious backing from the always stellar David Thewlis. Unfortunately, Thewlis takes a bit of a back seat here and seems a bit wasted. Dale Dickey and David Dencik also both shine here. However, Emma Watson is tasked with carrying much of the dramatic load (along with Hawke and Thewlis) and she seems a bit out of her depth. This is compounded by the fact that her character is not the most likable in film history, not to mention multi-layered, nuanced and conflicted. Watson never manages to corral all the aspects of this character into a believable and/or compelling performance.

As mentioned, while this film starts out strong and seems to be leading somewhere creepily fascinating, it ends not with a bang but with more of a whimper. It doesn't strike out, but it does lead you to think it's swinging for the fences when it actually was planning to sacrifice bunt the whole time. So the viewer will probably feel a bit let down. Some may disagree and this film might appeal more to a thoughtful person who doesn't mind a story veering off into an unexpected direction. But most will feel let down or even tricked.

If you are curious about where this film goes, you can do an online search for "Satanic Panic" or "Satanic Abuse Panic." That will give you a good idea of what this film is actually about.
19 people found this helpful

Glama PussReviewed in the United States on June 30, 2021
3.0 out of 5 stars
A whitewash of the truth...
Verified purchase
There is definitely SRA. One case captivated Los Angeles for several years and can be put into two words: Mc Martin. I knew a researcher into this and he knew Elizabeth Loftus, the woman who wrote the book on false memories. Oddly her name is the same as the name of the prostitute in the great Tim Roth movie Deceiver. SRA is NOT all fantasy but it is certainly underground. Great acting by Hawke who is in almost every scene and the character names are interesting - 'Angela' being the one that struck me the most. Evil exists and so does redemption, as in the father's 'sacrifice' of several years in jail for crimes he did not commit. Recommend.
2 people found this helpful

Boo SpanyerReviewed in the United States on July 25, 2020
4.0 out of 5 stars
Recovered Memories Trigger Nightmares for Detective Working the Case
Verified purchase
I didn't recognise it from the trailer but I'd seen it when first out (didn't realize til 20 minutes in or so.) I stuck with it because I couldn't remember exactly what happened. But I did recall that it was a good film with a solid plot. Worth watching again for sure.
It's a very good film, very well crafted. Some of the scenes are disturbing but they give you a build-up so you know to look away if you are that kind of person (or in my case if I think they may "hurt" an animal - I know it's make believe - I don't want to see it because it LOOKS real)
Everyone in the town is touched by the regression therapy in one way or the other it seems. Most suffer from bad dreams and/or hallucinations. Or do they? It's twisty and turny! Amenábar is such a talented director and this is another example, just not my favourite. But is very good! I'm glad I watched it again & I do recommend it.
3 people found this helpful

seymour1442Reviewed in the United States on May 8, 2021
4.0 out of 5 stars
A [very] loose re-hash of the child sex abuse hysteria of the 80s in Minnesota (and elsewhere)...
Verified purchase
Having lived in MN during the time that Kathleen Morris (the prosecutor) went totally berserk, and was seeing a child molester hiding behind every tree, rock, bush, and day-care center, this movie was a light-weight allusion to the horrific events which occurred 30-some years ago. It's hard to fathom the hysteria which was whipped-up, and the lives it destroyed, or at least damaged severely by over zealous prosecutors.

Accepting the fact that it would be utterly impossible to portray the carnage which occurred in a 90 (or 120) minute treatise, I think this movie was an heroic attempt to portray the utter mindless stupidity, and cupidity, promulgated by a group of bureaucrats with too much power and not enough brains. Think Salem Witch Trials, but on a much larger scale. Kudos to everyone involved for a valiant effort.
One person found this helpful

debjeffReviewed in the United States on October 16, 2019
4.0 out of 5 stars
Ethan Hawke
Verified purchase
I tend to watch movies others rate low. This is a good, solid movie with incredible twist. Ethan carries the plot, Emma Watson is a little stiff in her role; I enjoyed this film.
8 people found this helpful

GrowUpDaveyboyReviewed in the United States on May 3, 2022
2.0 out of 5 stars
The director made some choices that were disconnected from the viewers' enjoyment
Verified purchase
I am so fricking tired of the stylistic choice that virtually every scene of this movie is weirdly dark and under-exposed. I've been to police stations; they're not actually dark inside. Even in scenes with a. bunch of students in a classroom, the classroom is really dark. I've never been taught in a dark room, unless somebody's showing a movie. Outside, in the daytime, all the scenes are dark. Why? It's very distracting
Who is it that the director thought would really like this movie if every scene was unrealistically dark for two hours?
See all reviews
Back to top
Get to Know Us
Make Money with Us
Amazon Payment Products
Let Us Help You
EnglishChoose a language for shopping. United StatesChoose a country/region for shopping.
© 1996-2022, Amazon.com, Inc. or its affiliates