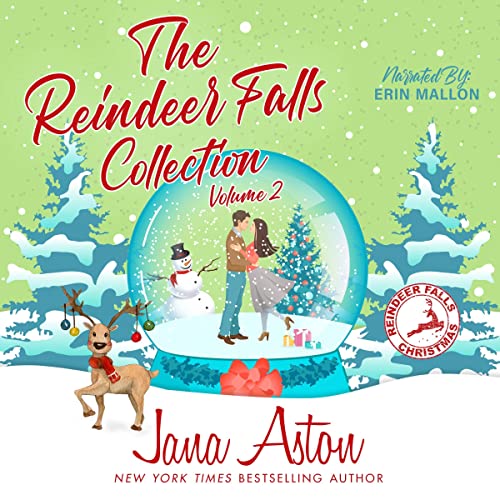 This is a bundle of Reindeer Falls Books 4, 5, and 6. Blurb to follow. Audio and paperback will only be available in the bundled format.

4.4 out of 5 stars
4.4 out of 5
81 global ratings
How are ratings calculated?
To calculate the overall star rating and percentage breakdown by star, we don’t use a simple average. Instead, our system considers things like how recent a review is and if the reviewer bought the item on Amazon. It also analyzes reviews to verify trustworthiness.
Top reviews

jenjen
5.0 out of 5 stars Fun Christmas read!
Reviewed in the United States on December 8, 2021
Verified Purchase
I loved this second installment for raindeer falls! These ladies and these Shepard brothers are fabulous! I loved each individual story and I love that they are all concurrent with each other. A little saucy and a lot of sweet, great holiday read!
Read more
Helpful
Report abuse

Grace
4.0 out of 5 stars Christmas Cheer
Reviewed in the United States on December 31, 2021
Verified Purchase
This series is pure lighthearted entertainment that gets you in the holiday spirit. Jana Aston is the queen of awkward heroines, hot heroes, and Christmas chaos that ends in a holiday hea.
Read more
Helpful
Report abuse

Alicia H
5.0 out of 5 stars Pure Christmas magic!
Reviewed in the United States on January 5, 2022
Verified Purchase
3 best friends fall for 3 brother over the Christmas season?? What a great book and swoon-worthy HEAs!! This book will make you laugh and fill you to the brim with Christmas spirit!
Read more
Helpful
Report abuse

janice grady
5.0 out of 5 stars Merry Christmas!
Reviewed in the United States on January 21, 2022
Verified Purchase
I loved this series! The characters are so loveable and believable! I hated when each book ended. They seemed so familiar and we're part of the family.
Read more
Helpful
Report abuse

Lacey's phone
5.0 out of 5 stars Loved all these short stories!
Reviewed in the United States on December 24, 2021
Verified Purchase
These were my first books I've read by Jana Aston and I really enjoyed them great Christmas feel . I read both volumes 1&2 .
Read more
Helpful
Report abuse

Lisa M. Mandina
5.0 out of 5 stars Love the next three books in this series!
Reviewed in the United States on December 3, 2021
Elves with Benefits:
So I loved the first three books in this series last year, and was so excited to hear that there would be three more this year. And this first one for this year blew me away! I adored the main character of this book so much, Maggie. Her love of this town of Reindeer Falls actually made me want to move there myself! Yes, I like the Christmas time of the year, but I’m usually a fan of all the other holidays too. Maggie’s constant adoration of her new hometown really made me think I would love to be a part of such a place myself!

And then Ryan, he was the perfect Grinch to counter Maggie’s Elf, I mean she totally would have been best friends with Will Ferrell’s character Buddy in the movie Elf. (Which might be one of my all time favorite Christmas movies that I can actually watch any time of the year.)

As with any book by Jana Aston, we also got some sexy times as well. Perfect for this little novella. Along with that we got hilarious banter, a favorite line of mine I had to bookmark was:

“Remember to wrap those packages before shoving them down the chimney.”

This was one of Maggie’s friend teasing Maggie and the other friend about their love/hate relationships with the Sheppard brothers that had moved back to town.

One Night with a Nutcracker:
What I love about the blurbs on these is that they are from the man’s viewpoint, yet the stories are from our heroine’s viewpoint. So that is kind of fun. Oh my gosh this one was just as hilarious as the first one! Because Lexi is hilarious. Oh my gosh! While she wasn’t the big Christmas loving freak that her friend Maggie from book one, Elves with Benefits, was, she had her own crazy little personality tics that had me giggling as well. Her running commentary as the story went along reminded me a bit of the way I think I am constantly running my own dialog in my head as if I’m in my own story. If only I could find my own sexy Sheppard brother. And especially one who would fall in love with my animals, mini-dachshunds in my case, goats in Lexi’s case, the same way that Jake did.

It was a little early that they got together for their hook-up, but it was all the “just tonight, let’s get it out of our system”. It was perfect for the short novella story that this was. As with last year’s three books in this series, I also enjoyed getting a little bit more of Maggie’s story but from Lexi’s side, and we got a little more hints into the next book, Bachelor on the Shelf.

If you’re looking for fun, cute, sexy, and quick holiday reads, these are the ones to pick up!

The Bachelor on the Shelf:
This one the main character was a librarian, so I loved that! Although I wasn’t a fan of how she kept saying what a librarian usually wore, because that is soooooo not true. But anyway, in a way, with the fake marriage with the baseball player Sheppard brother, that jumped in right away like many similar romances, and I mean that in a good way! While the first two in this second set of the series were a little more whimsical and silly, this was a little more real. Again, in a good way.

I really liked Carter, and of course there was always the question of why all he got was the dog when his two brothers got the house and the farm respectively. As much as I love dogs, it seemed a little bit less since Carter didn’t really know the dog Rudy, so it wasn’t based on that type of a thing.

But then he and Lexi were a fun match. She started out ready to be friends, but that first meeting, wow, he did not come across as very nice. So that made a bit of an enemies to friends aspect to this one as well. Once he kind of blackmailed her into being his fake fiance though, I fell in love with him. All the dates he set up were so perfect. Whether they were social media post perfect only, or taking her to a bookstore, they were just perfect. I would have to say that Carter is definitely my favorite from this series, and I could really put him on my all-time favorite book boyfriend list.

Once again I loved getting little peeks into the other two stories before this from a different point of view, it just really makes it all complete having these stories kind of taking place at the same time for all three. The epilogue was also perfect to get us a wrap up for all three couples. There were some quotes in the book that I adored, and had to save just to remember how perfect they were for a book lover like myself.

“If there’s books, I’m there. Books are everything to me. Libraries, bookstores, the bookshelf at Goodwill, I’ll stop at all of them.”

“There are books to be fondled, and they hate to be kept waiting.”
Read more
Helpful
Report abuse

Maria Passia
5.0 out of 5 stars Reindeer Falls
Reviewed in the United States on December 2, 2021
Elves with Benefits
Reindeer Falls is the place to be for people who love Christmas and want to experience the authentic Christmas spirit! This is why Maggie takes her job as the town's Christmas cop very seriously. And she won't allow anyone to ruin the town's reputation, even if he is hot and gorgeous. Ryan only wants to sell the house he inherited and return to the city. Nothing prepares him for the tempting woman who keeps giving him tickets for ruining Christmas. Could Maggie be the one to change his mind about Christmas magic? Elves with Benefits is a fun and exciting Christmas romance, that will bring joy to your heart!
One Night with a Nutcracker
When Jake inherits an old barn from his uncle, he plans to turn it into a golf course. But this is Reindeer Falls and things can take an unexpected turn. Sutton has made the barn the perfect home for her and her herd of goats. She is a wild and brave woman, who won't give up without a fight. Jake is efficient and responsible and exactly what Sutton needs! She is carefree and adventurous, but she can't give up her life in Reindeer Falls. She needs roots and Jake by her side to fulfill her dreams. Humorous and exciting, One Night with a Nutcracker is perfect for Christmas!
The Bachelor on the Shelf
Carter is a professional baseball player, known for his good looks and his fanatic groupies. When he inherits his uncle's dog, he sees his return to Reindeer Falls as a perfect opportunity to set his plans in motion. He needs to improve his image and Lexi, the town librarian, is perfect for the job! She's just what the public wants, but could she also be exactly what he needs? The Bachelor on the Shelf is a festive and comforting story, set in the world of Reindeer Falls, where the spirit of Christmas is always present, and even the wildest dreams can come true!
Read more
Helpful
Report abuse
See all reviews

Denise
5.0 out of 5 stars Perfection!
Reviewed in Italy on December 10, 2021
Verified Purchase
Loved it! Fanny, romantic and Chrismassy! The perfect read for The Season!
Reindeer Falls Volume 2 is as good as Volume 1!
With Jana Aston you cannot go wrong!
Read more
Report abuse
See all reviews
Back to top
Get to Know Us
Make Money with Us
Amazon Payment Products
Let Us Help You
EnglishChoose a language for shopping. United StatesChoose a country/region for shopping.
© 1996-2022, Amazon.com, Inc. or its affiliates