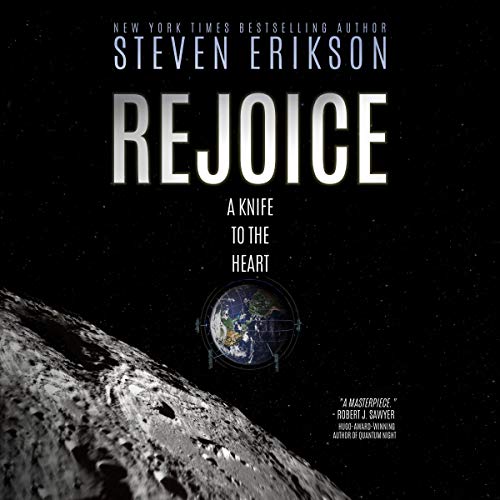 Rejoice, a Knife to the Heart

Imagine a First Contact without contact, and an alien arrival where no aliens show up. Imagine the sudden appearance of exclusion zones all over the planet, into which no humans are allowed. Imagine an end to all violence, from the schoolyard bully to nations at war. Imagine an end to borders, an end to all crime. Imagine a world where hate has no outlet and the only harm one can do is to oneself. Imagine a world transformed, but with no guidance and no hint of what’s coming next. What would you do? How would you feel? What questions can you ask - what questions dare you ask - when the only possible answers come from the all-too-human face in your mirror?

On the day of First Contact, it won’t be about them. It will be about us.

4.1 out of 5 stars
4.1 out of 5
132 global ratings
How are ratings calculated?
To calculate the overall star rating and percentage breakdown by star, we don’t use a simple average. Instead, our system considers things like how recent a review is and if the reviewer bought the item on Amazon. It also analyzes reviews to verify trustworthiness.

Daniel Carpenter
1.0 out of 5 stars No way Erickson wrote this
Reviewed in the United States on October 30, 2018
Verified Purchase
It’s that bad.

The only way you will like this book is if it is selling you a social and political order you already agree with. If that’s the case it will feel a lot like reading the brand of news paper you agree with... and little else. If you just happen to agree with the social opinion but aren’t the kind that likes to digest media that sells you your own opinion... no way you land on liking this.

Not as storytelling. And not as a Novell. It isn’t.

It’s one social opinion after another very awkwardly merged into something that masquerades as a narrative... but doesn’t seem to try much at all.

You know those great multi perspective sci-fi novels like footfall, or eon? Yeah. This is nothing like that.

This is a novel in which nothing happens.

In which characters become less realized and shallower as you read.

I figure maybe his (gender unspecified younger relation) wrote it and he said “what the hell, why not.”

Or he drinks a lot.

Or maybe wrote this in fits while watching the news? That could explain it.

Because that’s the only thing that explains this.

If - if - this was Erickson’s level best to purport, support, and sell his most cherished ideas... then his feet well and truly failed him just as he reached for what he believes matters. If - if - that’s what this is... then it’s really really sad. Truly.

Cause he’s a great writer.

And this is bad writing.

And unlike in the echo chamber of the book, I don’t think aleins are going to appear to champion a political perspective and anoint his policy approach here in the actuality.
Read more
31 people found this helpful
Helpful
Report abuse

ADB
2.0 out of 5 stars Predictably politicized, ultimately boring
Reviewed in the United States on November 3, 2018
Verified Purchase
Interesting premise but the cringe-worthy caricatures of modern public figures and the rambling, hate-filled and deranged political rhetoric really detracted from the story.

I can't actually believe that this is the same Erikson who brought us such a wonderfully creative and fully realized world in the Malazan series. There is so much wrong with the storytelling, and so much bizarrely specific fingerpointing that it feels as though this book was written as sort of a cathartic release for the author, a spasm of angry shouting at the society and people that he despises.

I changed my score from a 3 to a 2 after thinking about how disappointed I was with every aspect of this book, and after considering the previous quality that the author has delivered.

Skip this tale if you want to retain any semblance of respect you had for Erikson, because I promise you that this dive into the psyche and personal belief system of this angry and troubled man will leave you confused and disappointed with him.

This is not typical quality of Erikson worldbuilding and storytelling. This is a temper tantrum in novel form.
Read more
21 people found this helpful
Helpful
Report abuse

Karl
2.0 out of 5 stars Interesting premise but poorly executed and heavy handed in it's approach
Reviewed in the United States on October 24, 2018
Verified Purchase
I wanted to like this book, I found the prose well written and am on the right side of the political spectrum for the points the author was trying to make. However the obvious author insert mouthpiece character was heavy-handed and its approach telling us what we should think about the situation instead of letting us draw our own conclusions from what was occurring within the novel.
The addition of parody characters so obviously drawn from current real life figures(Trump, Koch brothers, Rupert Murdoch) means that the book will have no appeal to any other political spectrum and will likely not spend the test of time.
I think the author would have been much better served by focusing on how normal people across the world dealt with such a situation and left more mystery about what was causing it without the author mouthpiece explaining each and every detail and telling us how we should think about it. In addition the author's continual need to suggest that world governments and regular people would turn to science fiction authors for their answers on what is happening in this situation and the set of physicists and other scientists or philosophers same. Nothing more than self-aggrandizement.
Again, I wanted to like this novel but it seems such a waste of an interesting concept.
Read more
14 people found this helpful
Helpful
Report abuse

digitalice
5.0 out of 5 stars What an elevating novel!
Reviewed in the United States on November 18, 2018
Verified Purchase
Let me state from the get go that I have not read any of Erikson's fantasies. My only knowledge of this author comes from his novella, The Devil Delivered. I have read TDD more times than I care to admit. My copy is full of underlining and annotation because Erikson not only makes me think, he makes me think about humanity, my own blinkered, blind, lizard brained humanity. In this novel, Erikson dons the same didactic authorial voice but not in a turgid, snarky or even abstract way. It's story telling at its finest. Just like Plato used myth to illustrate his way of being, so does Erikson in his own way. He's judging humanity and find it wanting. The judge? An alien AI that to my mind represents the way forward in terms of human moral evolution. That alien POV character is a magic mirror, it's what we could be collectively, it's how we should be individually, the latter a prolepsis for the former.
I am loving this book. Just like TDD, when I lay it down I find myself wishing to be a better, more elevated, more wise, more humane version of myself than I was before I picked it up. Thank you, Mr. Erikson, really from the bottom of my heart. So many of my days are dark and confusing and then comes this wonderful book to shine a little light where i need it the most... To restore my waning faith in myself and my species evolution. Sadly, this book will probably be overlooked and forgotten nearly as soon as it was published. While Erikson said someplace that we really don't need to study monstrously difficult tomes of ethics (which I do as a living) we only need to bear in mind the phrase, "children are dying." This novel works for me in the same way, a powerful image that can be ignored or absorbed.
Read more
12 people found this helpful
Helpful
Report abuse
See all reviews

alun j eynon-evans
1.0 out of 5 stars what a load of dross
Reviewed in the United Kingdom on January 22, 2019
Verified Purchase
You should only buy this book if:
1. You enjoy being lectured at with lazy anti-capitalist propaganda
2. You believe all ridiculous conspiracy theories you find in the fringes of the internet
3. Your mind is closed to all views that are not your own
4. You enjoy wasting your time and money

As an example the book proposes that pharma companies know the cures for all diseases but are keeping that secret, NASA is hiding evidence of life on mars and a "black US government cabal" has and the third reich had files of advanced technology including "anti-gravity, discriminating energy fields, quantum linkage" which they were keeping secret from the people. Yawn.

Please do not buy this book because you are a fan of Steven Erikson's brilliant Malazan books. You will be sorely disappointed.
Read more
4 people found this helpful
Report abuse

Matthew Stenner
2.0 out of 5 stars Has a point but is dull
Reviewed in the United Kingdom on November 19, 2018
Verified Purchase
Although a great fan of Steven Erikson I got half way through this book and found myself not actually enjoying it. It does have a point to make, but it does it in far too heavy handed a way. It doesn't make you think, the plot is simply the protagonist is right.

There are a number of povs but none are really expanded upon and they all feel like 2D strawmen as there is absolutely nothing that can be done which has any impact.
Read more
4 people found this helpful
Report abuse

pennyfarthing
5.0 out of 5 stars Another masterpiece
Reviewed in the United Kingdom on July 16, 2021
Verified Purchase
Having read the malazan book of the fallen (twice) I love Stevens work. I was a bit wary of the whole spaceship thing but once started could not stop. Read in a whole sitting. Probably read again. Very thought provoking about our humanity to each other and the society we live in. Hope the series carries.onq
Read more
Report abuse

C. A. A. Drinkwater
5.0 out of 5 stars Moving.
Reviewed in the United Kingdom on April 8, 2021
Verified Purchase
One of the few Sci-Fi books that questions ideas in our time and not harking back to old past ideas and circumstances.
Read more
Report abuse
See all reviews
Back to top
Get to Know Us
Make Money with Us
Amazon Payment Products
Let Us Help You
EnglishChoose a language for shopping. United StatesChoose a country/region for shopping.
© 1996-2021, Amazon.com, Inc. or its affiliates