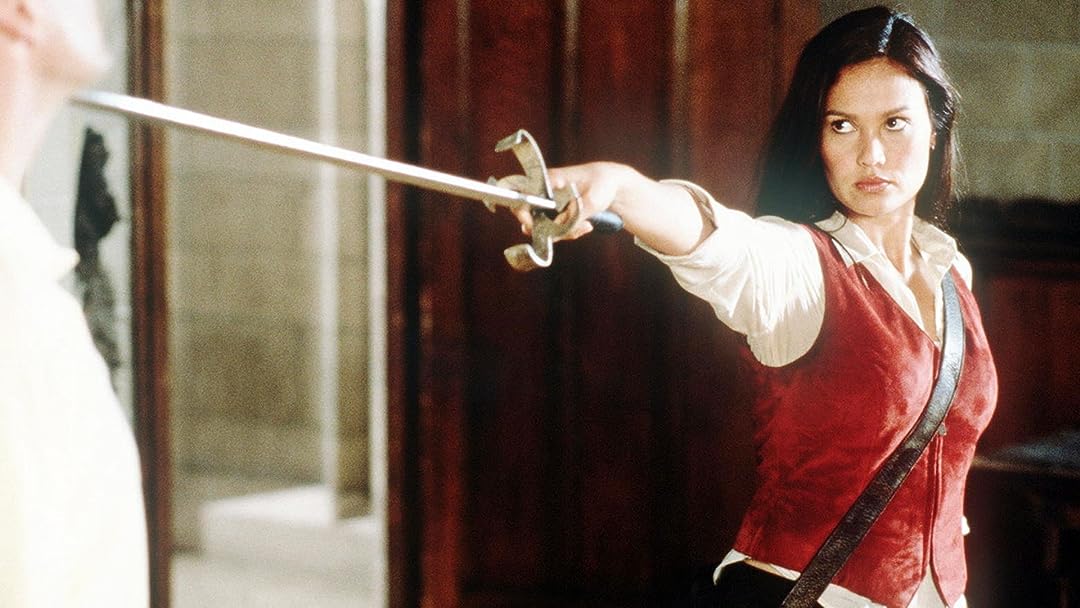 (268)
6.42000X-RayTV-14
History Professor Sydney Fox (Tia Carrere) moonlights as an intrepid explorer, crisscrossing the globe in pursuit of lost icons - from the four-thousand-year-old bowl of Siddhartha to a 1946 baseball glove with magical powers.

SidestreetReviewed in the United States on April 8, 2021
4.0 out of 5 stars
Give it a minute. It gets better as you go.
Verified purchase
The series starts out kind of slow for being a sort of Tomb Raider rip off, but then it starts to pick up a little steam. Don't get me wrong it's not "high drama" you are watching here. This is just for a little fun and nonsense, a little break in reality if you will. Tia Carerre is a good actress and she does her best to work with the scripts provided. Her British male assistant is annoying at times and humorous at others as he deals with the various women who weave in and out of the episodes. Then there is her crazy millenial secretary who is mostly useless and it's not even clear how she manages to retain her position. Gal Friday she is not.

I would say this show is predominantly for men, as the star, Tia Carerre, often finds herself in scantily clad or provocative situations. This holds true at times for other females guess starring in the episode.

By the end of the first season, the three main characters really start to gel together in their roles.

Overall it's a fun watch and I look forward to watching seasons 2 and 3.

Old UncReviewed in the United States on July 27, 2018
4.0 out of 5 stars
This is all pretty silly of course- it's TV after all
Verified purchase
This is all pretty silly of course- it's TV after all, but consistently entertaining. The main character, Sydney Fox (Tia Carrere) is an improbable mix of archaeologist, explorer and street fighter who goes off in search of various improbable, generally powerful artifacts and runs into a fairly amazing collection of evil opponents searching for the same artifacts. Aided by a nebishy assistant and a ditzy secretary she overcomes all obstacles to save the day etc.- you've no doubt been there. The quality could be better- it's a small picture, standard def. far as I can tell, and no captions; I can rarely understand what the secretary says and a lot of scenes have a lot of background noise, so this is a slight problem, but dialogue isn't this shows strong suit anyway.
5 people found this helpful

RedmenaceReviewed in the United States on August 11, 2020
4.0 out of 5 stars
Int/Lara on a tv budget
Verified purchase
Doing Indiana Jones or Lara Croft on a TV budget is a lot to ask. Don't go in expecting a cinematic scale and it is pleasant enough. Tia Carrera is personable and easy to like as a protagonist. The support roles of her secretary and T.A. are fine but not allowed to wander very for off their one note characterization. I think the actors could have carried more and The lead's on screen person would have still shone. Several episodes are low budget perhaps to pay for the more exotic ones. Worth watching..
2 people found this helpful

gregg gReviewed in the United States on July 18, 2019
4.0 out of 5 stars
Tia Carrere kicks ass
Verified purchase
I'm a Tia Carrere fan. What can I say. She uses her brain to solve puzzles. She hates guns. She kicks dudes' asses with Martial Arts. Production values are pretty decent. Female TV style Indiana Jones show. You occasionally get to see Tia's lovely bod in skimpy outfits and enjoy her beautiful face as her eyes twinkle with joy and good fun. What more could a fellow ask for?
5 people found this helpful

David T. RichersonReviewed in the United States on November 4, 2019
4.0 out of 5 stars
Good for what it is.......
Verified purchase
This is NOT Masterpeice Theatre, and was never intended to be. It's a fun action-adventure romp through a series of dramatic, although sometimes silly story lines. And it manages to remain mostly light-hearted through it all.
It's just good fun. What more could you want?
3 people found this helpful

MarsiesReviewed in the United States on May 3, 2018
5.0 out of 5 stars
Dont miss this great female indiana jones feel good tv show. Lots of fun!
Verified purchase
A lost relic of a series finally digital! This series has great storylines for each episode with a feel good female lead. Indiana Jones with the light goofball humor. Yes its sort of like Lara croft and Indian kones combine but that is on purpose. Season 1 has some fun guest appearances such as John Schneider and Thomas Kretschmann (Emperors bride)
6 people found this helpful

William AmazziniReviewed in the United States on March 20, 2011
5.0 out of 5 stars
Lara Croft, Meet Sydney Fox
Verified purchase
Before the SYFY channel became the leaders in genre television, there was an incredible amount of product coming from other countries. New Zealand was giving us the 'HERCULES'/'XENA' franchises and Canada was giving us 'FOREVER KNIGHT' and 'HIGHLANDER'. By the late nineties, France and Canada took over the production of the 'HIGHLANDER' and 'HIGHLANDER-THE RAVEN' series and executive producers Christian Charret and Denis Leroy gave us 'RELIC HUNTER' a muse of the Indiana Jones/Lara Croft mythologies and introducing us to the character of Sydney Fox who as a professor of antiquities at Trinity College has a second life as adventuress extroadinaire. Along with her assistant Nigel, each episode introduces the primary relic by including a 5 minute prologue taking place in past history and then merging the drama into modern times so that our characters can either recover or lose it. Tia Carrere owns the role of Sydney blending femininity and toughness within a blink of an eye. Christian Anholt plays Nigel erratically by playing down his masculinity and being the comic relief, however, the blend works. Lindy Booth plays the hair-brained secretary but disappears after the first season. In some episodes, Sydney meets up with former relic hunter/past lovers and who compete for the said relic. The series credits are very impressive: Brilliant Production Design by Ed Hanna with Tony Thatcher in charge of Production gives the exotic locations and historical flashbacks incredible depth and authenticity; Photography by Bill Wong is fast and busy; and the Music score by Donald Quan should be considered one of the best in genre television. Gaumont television went on to give us many other series such as 'THE QUEEN OF SWORDS' and the Adrian Paul 'TRACKER' series but phased out in the mid 2000's. This first season holds up with the best of the over bloated Hollywood action movies that preceded it and is a must for all action fans. Alliance should be commended by releasing all 22 episodes and didn't take the way out like Koch Entertainment did. If you are going to release a series , don't rely on yourselves to decide what are the best of 66 episodes of three seasons to give to the fans. Release them all and that's what Alliance has done. However, there are no extras and the box set has six discs contained within shoddy plastic trays where they easily plop out and move around so be warned. The quality is full screen and crystal clear with awesome Dolby stereo sound so excuse me while I start on Season two. Whatever you are doing now, Tia, you will always be remembered as Sydney Fox, a character who brought eroticism and no holds barred action to Nineties television. Salute!!!!
52 people found this helpful

Geri BethelReviewed in the United States on March 11, 2022
5.0 out of 5 stars
Fun to watch
Verified purchase
I enjoyed watching this series. I always like when they show competent strong women.
See all reviews
Back to top
Get to Know Us
Make Money with Us
Amazon Payment Products
Let Us Help You
EnglishChoose a language for shopping. United StatesChoose a country/region for shopping.
© 1996-2022, Amazon.com, Inc. or its affiliates