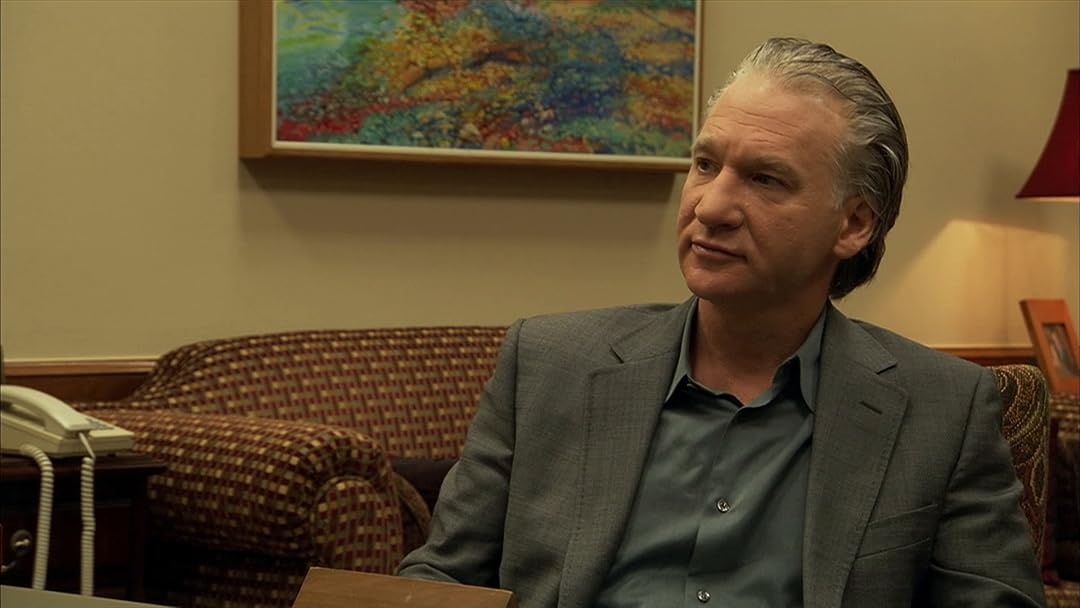 (2,186)7.61 h 41 min2008X-RayR
A hilarious documentary from the director of BORAT that follows political humorist and comedian Bill Maher as he interviews people around the world about God and religion.

KirstieReviewed in the United States on September 3, 2017
5.0 out of 5 starsExcellent and useful 😊
Verified purchase
If nothing else, I appreciate this movie as a conversation starter. As an atheist, nearly everyone finds conversation about atheism to be grating, unpleasant, or downright offensive. I have shown this movie to many believers, and while it has changed some minds, its most profound effect is drawing the attention of religious people to some very legitimate criticisms of religion in general. Maher is a polarizing figure who sometimes over-relies on hyperbole and generalizations, but there are kernels of truth within much of what he says. A valuable tool for any atheist or anti-theist, and entertaining on its own to boot. Films like this encourage dialogue that has profound effects on peoples' perceptions of religion, and particularly the perception of atheism as a viable alternative to belief.
31 people found this helpful
Report abuse

Stephanie SullivanReviewed in the United States on July 14, 2018
5.0 out of 5 starsThought Provoking, Encourages Discussion Of Religion Across Beliefs, Bill Maher Asks Questios Of A Usually Taboo Topic
Verified purchase
First off, I was already a fan of Bill Maher before watching Religulous so I'm predisposed to enjoy his humor. Religulous follows his patter of thinking about things most of us don't and often are not considered polite conversation. I think discussion of religion and asking questions about belief and why is important topic for the full spectrum of belief from atheist to extremist fanatic.

Bill comes at this as a atheist. He is respectful of others as he asks questions about belief. Things like "do you really believe in a talking snake?" being one question of someone who says they believe the bible literally... Generally Bill was respectfully received and the conversations were polite. Some of the people who were upset by his questioning made me wonder how solid their faith might. If just asking questions about their belief's shook them up enough to be upset?

It was interesting to watch Bill's questioning as the mirror image of a discussion with someone proselytizing (witnessing or whatever other term might apply) their beliefs. There are other parallels I can think of.

In the end Religulous does not make a conclusion so much as a challenge to think and maybe talk about religion with someone who thinks about it differently than you do. I think if we get to know each other better then maybe we all can better get along together. I'm giving Religulous 5 stars. I think it's much more thought provoking than funny, though that was in there too.

Jasmine MartinReviewed in the United States on September 17, 2020
1.0 out of 5 starsoverall ignorant and disrespectful.
Verified purchase
At the most I am glad it had some entertainment value. But it was overall ignorant and disrespectful. I have my beliefs and while opposed to many of the religions represented here I would never be as bold as to disrespect their views in the way Maher did.

It was very condescending. The points he made were not based on any hard logic or a real desire to understand where the otherside was coming from.

The story of Horus and Osiris keeps being a talking point somehow and has been debunked so many times it's ridiculous, yet ppl still fall for it bc the portrayal of its similarity to the Jesus story seems to linger and almost be desired.

Regardless of what ppl believe.. non belief is a belief... so religion will never go away.
6 people found this helpful
Report abuse

Michael PayneReviewed in the United States on June 4, 2018
4.0 out of 5 starsI don't agree with a lot of things Bill Maher ...
Verified purchase
I don't agree with a lot of things Bill Maher claims to believe politically. Putting this aside though and only focus on the issue he's addressing in this movie, I agree with most of what he's saying. I think he spends probably more than half of the movie arguing against the brand of religion he was raised with which is Catholicism/Christianity, but also spends almost enough time countering Judaism and Islam. He also briefly highlights the absurdity of a couple of minority religions such as Scientology. He almost completely ignores other major religions such as Hinduism and Buddhism, but the movie is only so long and when you're targeting a western audience you probably want to highlight the things they're most exposed to, and if your thesis is against religion as a whole than you don't really have to highlight every one of thousands of different main religions or permutations of them. I'm not an atheist but I don't believe in religions, and he does ask some questions that anyone who thinks their religion can stand up to scrutiny should be able to answer without resorting to illogical arguments or dogma to answer. You can't just say "because God says so." in response to a question, when the only evidence you have that God says so is something that a man wrote down.
12 people found this helpful
Report abuse

A. SmithReviewed in the United States on June 10, 2020
2.0 out of 5 starsBill Maher did not prepare for this
Verified purchase
I do not consider myself to religious, but have studied religion fairly extensively in an academic context and in my career. I was hopeful that this film, although made by a comedian, would offer some intelligent interviewing on the part of Bill Maher. Instead, he approached people with smugness and apparent disdain that did not seem warranted. He appeared severely under-informed about religious cultures, history and had trouble with even the basic perspective-taking that my young children can muster. This might have been forgivable if the film was at least very funny, but it didn’t deliver in that area either. The one upshot for me was that those being interviewed were generally more patient and humble than Bill Maher which will hopefully counteract some of the negative messages he is sending about religious people. Religion by and large has been shown scientifically to have positive effects on individuals and since Bill appreciates science, it would have been good to do his homework on the psychology literature in that area.
3 people found this helpful
Report abuse

AtaturkReviewed in the United States on November 20, 2020
5.0 out of 5 starsi have always believed what i believe and that is...
Verified purchase
i have always believed what i believe and that is...anything man made is not to be believed. there are shades of truths and degrees of truth contained in conspiracy. believe in something or nothing that is your belief. no one that's died has come back so, the stories of the afterlife and what they've seen is wishful thinking. i like that bill m. begs the difficult questions. i cringed at those moments when religious barkers failed to provide unrefuted proof of their rhetoric. it s obvious they regurgitate what they themselves were doctrine into as youths. blind faith is just an excuse to excuse the discrepancies. to let down your guard what intuition says is balderdash. religion makes it possible to fleece the disenfranchised with promise of a promised land. if the religious institutions want to help the lambs of God and provide relief. then, let that relief be in the way of them paying for universal healthcare. otherwise, a tax must be paid for all the bloody wars that are waged in the name of...i have been to religious sites over the world and as i stood at each one, i did not feel a special reverence in the physical place. the entire universe is connected. perhaps because just being alive makes that so or, there is something more ethereal to consider. for anyone that's ever been put under general anesthesia, you wake and you wonder 'is it over already?' you didn't dream, you were unaware. in other words, once the brain is put to sleep in such a way as to be near death as the word and practice of anesthesia implies, you understand, death is a nothingness. a total loss of being and all the sense that embody the meaning of being alive. fear death less and fear being alive and living as though you're dead. work less, love more. appreciate the meaning of being alive and with those you share your journey with, without constantly questioning the things that man cannot explain or comprehend. i cannot subscribe to a jealous God. and for that, i appreciate bill m. for his efforts to snuff out the religious. thank you! as for the viewers of this film. take offense, skimp over it or turn it off completely. but, if you do, ask yourself, if you're a true believer then you have to believe that we are all one and the creator would not like that you put one religion over another and then puff up with indignation of the differences. for if you are broad minded enough, you will take the time to read all you can on all religions before picking one of your own accord or not and then, you'll realize that all manmade religions carry a very close and common belief system with just a smidge of differences then ask yourself, why has bloody religious wars been waged over a matter of opinion that's only slightly different. i think you should give this film at least one view then decide. at best, lets all agree to disagree but be adult and mature about it.
One person found this helpful
Report abuse

AntoniaReviewed in the United States on February 7, 2021
1.0 out of 5 starsDo your research Bill
Verified purchase
Bill Maher is more interested in being upset than in reading up on progressive interpretations of the bible. He is lumping all Christians together and only interviews ultra-conservatives and fundamentalists to prove the point that he has been pushing for years: All religions, Christianity in particular, are BS. Many progressive pastors and historians today are clearing up myths such as the "virgin birth" (virgin in the literal translation actually meant "young unmarried woman"), hell ("gehenna" = "hell" was actually a place outside of Jerusalem and never meant to be a purgatory type of thing), "homosexuality is a sin" (the bible condemns sexual violence, abuse, and incest, not homosexuality as such), etc.. Why not include progressive voices in a documentary about Christianity? Because it's so nice and comfortable to tell a one-sided story about Christians being idiots. Bill Maher seems to have made it his life's purpose to be on a crusade against religion.
2 people found this helpful
Report abuse

HopefulConsumerReviewed in the United States on March 20, 2021
1.0 out of 5 starsshooting fish in a barrel
Verified purchase
Multimillionaire television host and former comedian purports to mock religion, but just can't help making it all about himself (I know: surprise, surprise). The bland, monotonous, affected delivery on this guy wore thin a long time ago. One need not sit through this narcissistic tedium to know the religions of the world include esoteric and bizarre superstitions. Any Christopher Hitchens video on YouTube is far more informative on this topic, and far more entertaining . . .
2 people found this helpful
Report abuse
See all reviews
Back to top
Get to Know Us
Make Money with Us
Amazon Payment Products
Let Us Help You
EnglishChoose a language for shopping. United StatesChoose a country/region for shopping.
© 1996-2021, Amazon.com, Inc. or its affiliates