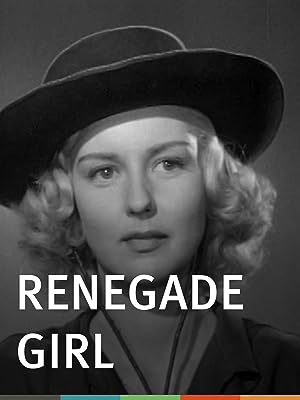 (2)
1 h 7 min1946NR
Jean Shelby is a member of a family of Confederate sympathizers during the Civil War. The Union tries to capture the Shelby family with the help of an outcast Indian who has his own grudge against the Shelbys.

Included with Best Westerns Ever on Amazon for $1.99/month after trial

Watch with Best Westerns Ever
Start your 7-day free trial
Add to
Watchlist
By ordering or viewing, you agree to our Terms. Sold by Amazon.com Services LLC.
Write review

Tom Without PityReviewed in the United States on August 26, 2010
3.0 out of 5 stars
Ann Savage IS Renegade Girl
This is a review for the 1946 Lippert Pictures release, RENEGADE GIRL
which was directed by William Berke.

Ann Savage had just made a good size impact on the film world in DETOUR
so the people behind this film probably had to hustle to get it on the
market which they did for a Christmas Day release in 1946.

The story concerns Jean Shelby, played by Ann Savage, whose Missouri
family are Confederate sympathisers and in 1864 have been passing information to
the rebels about the Union Army. When her brother is killed Jean becomes the
head of the Confederate guerillas although by this time she is involved in
an unlikely love affair with a Yankee captain, played by Alan Curtis.

Eventually she comes to believe that the captain has betrayed her and
Jean Shelby vows a swift revenge on the Union and its sympathisers.
RENEGADE GIRL is a "B" western that uses the historical fact of the
Missouri border wars as a backdrop for its rather unusual love story
and it contains a fair amount of western action.

By the way, Ann Savage and most of the rest of the cast give believeable
performances in RENEGADE GIRL. This is a fairly fast paced film
which according to my player clocks in at under 70 minutes.

Because RENEGADE GIRL is a "B" picture there are some choppy moments and
transitions, etc that could have been done a little more smoothly but
overall I give RENEGADE GIRL 3 1/2 stars.