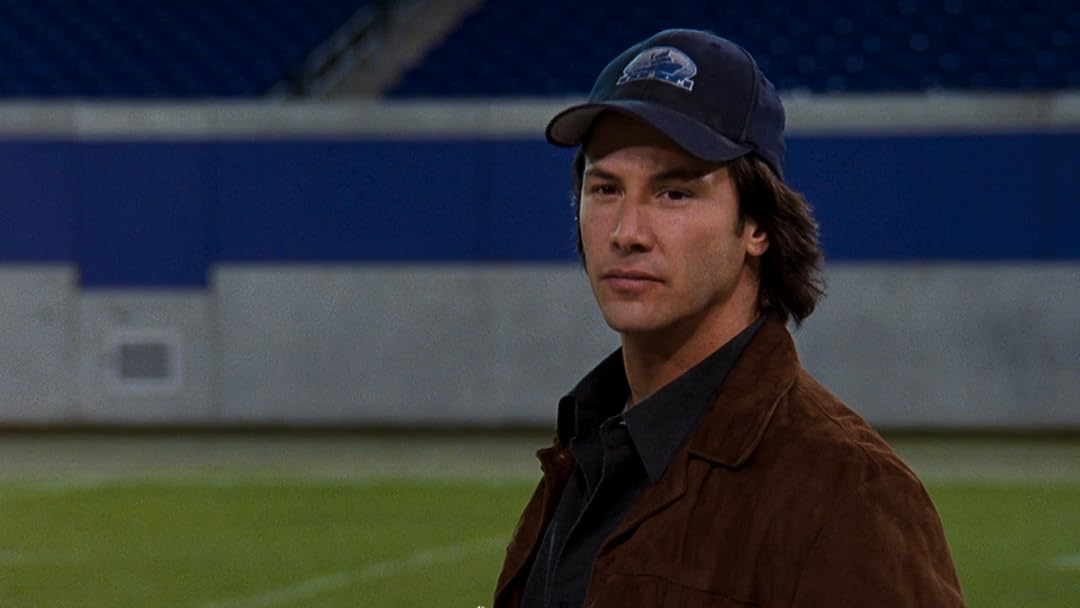 RenterReviewed in the United States on February 17, 2016
4.0 out of 5 stars
Triumphant, in its way
Verified purchase
If you like football comedies, chances are you've already seen this. The Replacements stars Keanu Reeves as Shane Falco, a former all-star college quarterback who dropped off the radar after a disastrous game. Gene Hackman plays Jimmy McGinty, a semi-retired football coach known for being an out-of-the-box thinker. When major league (fictional) team the Washington (DC not the state) Sentinels go on strike, the team's owner hires McGinty to put together a team of replacement players. McGinty taps Falco along with an eclectic group including: a Sumo wrestler, a gung ho military cop, a running back who runs like the wind but fumbles the ball, a debauched Welsh footballer, a super-talented player who only missed out on the majors on account of being deaf, brothers who dropped out of the majors when the league tried to split them up on separate teams, a maximum security prisoner given temporary reprieve by the governor, and Faizon Love. Then there are the cheerleaders, who apparently walked too (that part is never fully explained but this movie is too charmingly silly to take it to task). Brooke Langton plays Annabelle, the head cheerleader who grows increasingly fed up by the audition montage. When a pair of exotic dancers show up who act like they know what they're doing she decides to just hire them and all their coworkers, to results that contribute to one of the funniest scenes in the movie. This movie opens on an upbeat late 90's era alterna-pop song, and that mood never truly wavers, although there is an underlying poignancy to the story as it plays out. I won't spoil the ending but I will say it's uplifting but not over the top. Definitely worth checking out if you like sports comedies.
18 people found this helpful

Charles van BurenReviewed in the United States on May 3, 2018
5.0 out of 5 stars
second chances
Verified purchase
I don't have a lot of interest in sports but I watched this movie when it was released to theaters and now I have streamed it via Amazon Prime. Even those only mildly interested in football ought to be able to enjoy this great feel good movie about second chances. Somewhat predictable but who wants to watch a movie in which the people with second chances lose? One of the best of its type.
9 people found this helpful

J&JReviewed in the United States on March 23, 2020
5.0 out of 5 stars
Ensemble cast doing Electric Slide in a jail cell
Verified purchase
Such a great high energy, heart warming, comedy. Truly a rare Must See.
Happily paid to own this but, if you've never seen it, please watch it just once.
I love football. Even if you don't, the characters in this underrated movie are Gold.
You think it's going to be a Keanu anchored movie but that's Gene Hackman's role.

It's an 'Oceans 11' type Ensemble that Keanu blends into like Brad Pitt.
With Orlando Jones, the band leader in 'Drumline' & guy selling magazines in 'Office Space'.
Jon Favreau, from my personal fave 'Love & Sex' (free on Prime/Tubi right now) but,
better known from 'Swingers', 'Four Christmases' and most Vince Vaughn movies.
Faison Love, of 'Friday' Fame & also 'Couples Retreat' with Favreau.
And a bunch of people you'll see & go "Oh, I know them!"
Plus a bunch more you've never seen that you want to cheer for & laugh with.

Just to watch a bunch of grown men do the Electric Slide to 'I Will Survive' in jail cell is worth it.

But mostly, you'll just laugh out loud at these "misfits" based on true story of
the time there was a strike & forgotten players got a second chance.

Cathy CarolReviewed in the United States on October 16, 2021
5.0 out of 5 stars
For fun and loads of laughs, see The Replacements.
Verified purchase
The plot is Washington going on strike a few games from the playoffs. A grizzled coach and replacement players attempt to take the team to the playoffs. Getting from A to Z is so much fun. Keanu Reeves, a quarterback who once lost a game in front of the entire world and no one forgot, leads a great hilarious cast. I don’t care for football or comedy, yet I see this film once yearly.

Jason H.Reviewed in the United States on December 19, 2017
4.0 out of 5 stars
and the great Gene Hackman
Verified purchase
I'm not a big fan of sports, and definitely give most sports related movies a pass, unlike my wife who loves both (and especially football). This movie, to quote a line "has heart". Keanu Reeves plays Shane Falco, a washed up professional quarterback who gets a chance to play again when the professional football players strike. Here, he actually shows a bit of acting ability, unlike his earlier efforts (Bill & Ted, for example, or even the Matrix). The supporting cast, from Orlando Jones to Jon Favreau, Rhys Ifans, and the great Gene Hackman, all come together to really make this movie a lot of fun. Don't go into it expecting Remember the Titans, but more .....Bad News Bears.
3 people found this helpful

Jacob SabinReviewed in the United States on May 7, 2018
5.0 out of 5 stars
I am very glad I have
Verified purchase
I have been meaning to see this for quite some time. I am very glad I have. It is not going to go down as the greatest sports movie ever nor the greatest comedy ever. But it is a funny, entertaining movie with some heart filled moments in it as well. Certainly worth the watch as a sports fan.
5 people found this helpful

MyD -- The ViewpointReviewed in the United States on January 4, 2015
4.0 out of 5 stars
COMFORTABLE SPORTS COMEDY WITH SOME GREAT COMEDIC MOMENTS --- PLUS HISTORICAL NOTE ON 1987 NFL STRIKE
Verified purchase
***BLU-RAY PICTURE QUALITY NOTES BELOW

"PAIN HEALS, CHICKS DIG SCARS, GLORY LASTS FOREVER!" --- (quote sums up the tone you can expect from the movie)

For those who remember the events in the NFL players strike in 1987, it wasn't very funny for fans at the time. However, this movie from 2000 makes use of that event to show us what great fodder for comedy it really was. It succeeds in part by simply never going too far awry. All the sports comedy clichés are checked and that is exactly what makes it work. It simply gives us what we have come to expect. Funny characters, lovable underdogs, situational laughs, a little romance, an outcome we know is in the pipeline - but satisfies.

THE PLOT: Fictional teams are used to depict a league hit by a player's strike. Replacement players must be found. Some teams manage to buy ringers from current NFL players willing to cross the strike picket lines. Others like the "Washington Sentinels" take a more creative approach, bringing a mixture of washed-up former college players and some odd balls like a Welsh footballer with a gambling problem and a sumo wrestler who likes to gorge on hard boiled eggs. This motley crew of ex cons, psychopaths, and has-beens will have to gel and rise to the occasion if the season is to be saved and a playoff birth secured. As it happens, the cheerleading squad seems to be The Replacements as well. The head cheerleader (and QB love interest) struggles to form her squad and manages to find a gaggle of stripperific gals from the local club. You see what I mean about checking all the sports cliché boxes, and I don't mean that in a bad way.

CHARACTERS: Keanu Reeves plays Shane Falco, a former college star with great skill but failing confidence after a disastrous final game in the Sugar Bowl. The show adds a surprisingly unique set of surrounding personalities. Jon Favreau is the psychopath linebacker that just wants to mow things down, even when congratulating his own teammates on the field! Orlando Jones is the motor mouth wide receiver, fastest in the game, who consequently can't actually catch. All are led by the venerable replacement coach Jimmy Mcginty (Gene Hackman). The show survives in large part to the personality quirks of these odd ball players. The cheerleaders are also hilarious, particularly in the tryouts near the start of the show. The string of absolutely awful prospective dancers are precisely what lead Annabelle to rely on the stripper recruits. I kinda wish they had kept some of the hilarious tryouts on the squad!

HISTORICAL CONTEXT: The 1987 Players Strike only lasted 24 days and began after the second week. I seem to remember it feeling longer! Replacement players were quickly recruited from then recently closed CFL and USFL leagues. Many NFL players also chose to cross picket lines and continue playing. These included notables like Cowboys Randy White, 49s Joe Montana, and Patriots Doug Flutie. TV ratings dropped 20% during the few weeks of replacement players. That was actually a surprise because they thought it would be worse. Replacement games may have cost playoff births to some contender teams like previous SB champs the NY Giants, who faired poorly during the replacement stretch and then failed to make the playoffs.

2015 BLU-RAY RELEASE: As I suspected, this lesser known catalog release is a passable upgrade and generally looks good. It's not the kind of title they put a huge amount of resources into a remaster. The colors are vibrant enough, but the picture is not quite as crisp in many scenes as I had hoped. If you already own the DVD, likely just the bigger fans will want to go out for the movie again on Blu-Ray.

CONTENT AND FINAL THOUGHTS: This won't go down as one of the great sports movies of all time, but it's easily memorable enough for a Friday night and some good chuckles. Some of the characters are memorable. They don't go out on a limb much in any one area, and even the stripper cheerleaders are pretty tame by today's standards. However, there was a locker room scene with rear male nudity. Just remember the movie is now 15 years old at time of writing, but has aged fairly well in my opinion. I suggest a rental unless you know you are already a fan. But I definitely recommend it!
18 people found this helpful

MarkReviewed in the United States on March 28, 2021
5.0 out of 5 stars
Super fun movie that's great for a rainy day's entertainment
Verified purchase
The Replacements is just one of those fun movies you can watch over and over again, and never get tired of. I've always loved Gene Hackman and feel he's one of the most underrated actors. He's great in this movie, as is the rest of the cast. A great movie with a minor cult following.
See all reviews
Back to top
Get to Know Us
Make Money with Us
Amazon Payment Products
Let Us Help You
EnglishChoose a language for shopping. United StatesChoose a country/region for shopping.
© 1996-2021, Amazon.com, Inc. or its affiliates