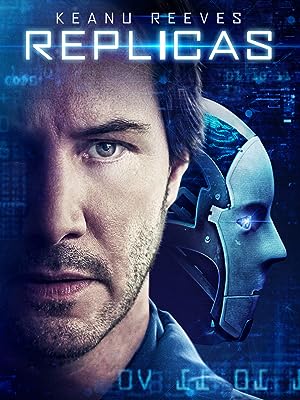 (7,810)
5.51 h 47 min2019HDRUHDPG-13
Keanu Reeves leads this suspenseful sci-fi thriller about a neuroscientist who secretly tries to clone and create replicas of his family after a tragic car crash.

J. HanrattyReviewed in the United States on March 14, 2019
4.0 out of 5 stars
Don't listen to the critics, give this a chance!
I enjoyed this movie. I hate listening to critics, a movie is good if you the watcher enjoy it and I did enjoy this. I like pretty much anything Keanu is in. This movie was a nice depiction of a family man (Keanu) making the biggest decision of his life to keep his family alive. What I really enjoyed was the aspect of what would you do if faced with this situation and opportunity. You have a man doing what he feels is best to keep his family alive, would you do the same? If you are into ignoring the critics and giving a movie an actual chance, I say watch this.
217 people found this helpful

The TruthReviewed in the United States on April 6, 2019
4.0 out of 5 stars
It's not as rotten as tomato throwers say it is.
Verified purchase
Look, Ted - oops, KEANU - has never been a strong method actor. But his dark aloofness works in the sci-fi category in films like The Matrix, and in Replicas. Replicas is an interesting new spin on robotics and computing, with a pair of scientists who have collectively figured out two impossible human challenges. It's a great story with an interesting twist I hadn't thought of as a budding sci-fi author in the same realm. Personally, I enjoyed the two "a-ha moments." It was great to see Ed played by Silicon Valley's Thomas Middleditch with the same vigor and wonder as his Pied Piper role. Alice Eve is robotic at best, but considering the story, I think that was the director's choice. John Ortiz plays a cartoonish villain along with several man-bun sporting exotic dancers posing as his goons, but it was probably shoddy direction rather than his performance that spoiled his role. Yes, the effects were sometimes silly and there was poorly rendered CGI at times, and some of the establishing lines could have been less expected, but overall it was an enjoyable 4-star sci-fi flick. Remember to support this genre, or all we'll be left with is Oscar contenders that favor art over story, or worse, superhero movies. And that'd be a pretty boring world.
139 people found this helpful

Carl SchultzReviewed in the United States on March 9, 2019
1.0 out of 5 stars
A Triumph Of Bad Cinema, And A Future Cult Classic
“Replicas” Distributed by Entertainment Studios Motion Pictures, 107 Minutes, Rated PG-13, Released January 11, 2018:

A neuroscientist is working on a project involving the harvesting of human consciousness from recently deceased bodies and into alternative host vehicles--basically brain transplants into robots. But the doc can’t seem to work the ol’ bugs out of the procedure.

When his wife and kids are killed in a tragic auto accident, the scientist finds new inspiration for his research. He harvests his late family’s intellects onto big flash drives, transports them to his secret basement laboratory, and then not only resurrects his loved ones but also uses a soupy artificial means to clone their original bodies as hosts for their recovered psyches. He’s able to formulate the necessary technology and accomplish all of the above in seventeen days flat, but soon finds that his family's rebirth is only the beginning of his problems...

This is one movie that literally has to be seen to be believed. Destined to achieve immortality as a cult classic, “Replicas” is either the most ridiculous movie of the new millennium or a masterpiece of camp, depending on your threshold for absurdity. An over-the-top blend of science fiction and horror, the movie seems to play along the periphery of self-parody but somehow never quite manages to step over the line into flat out hilarity. The result is an unlikely combination of the 1962 midnight movie staple “The Brain That Wouldn’t Die” and 1985’s “Re-Animator,” with a heaping dose of “RoboCop” thrown in.

Keanu Reeves has always been an honest performer. Whether in the surprisingly enduring romantic sports comedy “The Replacements,” the popular “Matrix” trilogy, or the megahit action adventure classic “Speed,” the actor invariably displays a sort of urgent and earnest truthfulness that’s enormously attractive to movie audiences, particularly his legions of fans. Even as the vacant stoner in the “Bill and Ted” comedies, Reeves seemed to passionately pursue his own imbecilic cluelessness

In some weird way, this same sense of urgency works for the effectiveness of “Replicas.” In a role that cries out for a tortured and obsessed demeanor, Reeves instead conjures a sort of overwhelmed sincerity, making almost logical his character’s ability to steal every car battery in his upper-class neighborhood over the course of one single night--about sixty or so, it looks like--when he can’t find a place that sells generators at three AM. But the actor’s patented earnestness is almost enough to redefine at least temporarily our image of a cinematic mad scientist. Maybe "Replicas" was meant to be a comedy, but nobody told Keanu.

Playing the Igor to Reeves’ Dr. Frankenstein is the Canadian actor Thomas Middleditch, employing the same loopy, good-natured manner he uses in his ubiquitous TV appearances as the pitchman for Verizon Wireless. As an expert in human cloning, Middleditch possesses a pretzel logic that allows him to give issues of ethics and morality nary a thought, but fret that he and Reeves will get in trouble at work for swiping several million dollars’ worth of cutting edge medical equipment that looks like it came from 1957’s “The Curse of Frankenstein.” And they do get in trouble, but not for the reasons you’d expect.

Written by newcomers Chad St. John and Stephen Hamel and directed by “The Day After Tomorrow” filmmaker Jeffrey Nachmanoff, “Replicas” throws rational thought to the wind and, intentionally or not, infuses the film with enough plot holes, narrative silliness, continuity issues, and leaps of reason to delight connoisseurs of bad movies. Still, it’s never tedious or boring, it’s almost impossible to dislike, and you just can’t say it’s not entertaining.

Distributed by Entertainment Studios Motion Pictures, the independent film studio founded in 1993 by comic Byron Allen to “take the studio crumbs and make a gourmet meal,” “Replicas” is being marketed relentlessly over the television airwaves, with television commercials sometimes appearing twice or more during the same station breaks.

Entertainment Studios was hoping to earn a modest $7 million from the picture during its opening weekend in 2329 theaters across North America. In the end, including only $200,00 from Thursday night sneak previews, ”Replicas” grossed only $2.5 million during its first weekend in release, one of the worst all-time debuts among movies premiering in 2000-plus venues.

Unsurprisingly, “Replicas” is being blasted by the critics, earning an approval rating of just 9% from Rotten Tomatoes against an average score of 17% from Metacritic, both indicating “overwhelming dislike.” The entertainment newspaper Variety specifically notes the picture’s “cavernous plot holes, risible dialogue, and ludicrously illogical behavior.” Exit audiences polled by CinemaScore award “Replicas” a grade of C.

Also starring Alice Eve from 2013’s “Star Trek Into Darkness” and the always reliable John Ortiz, “Replicas’ is rated PG-13 for thematic material, violence, disturbing images, brief nudity, and sexual references. Warning: There’s a horrifyingly realistic automobile crash about twenty minutes into the picture, so be prepared to cover the eyes of the youngsters.

Sarina M.Reviewed in the United States on April 7, 2019
5.0 out of 5 stars
Super good
Verified purchase
This movie was super awesome I don’t know why people say was a bad movie I just watched it and I thought it was super good the plot was good the actors were good and the movie had a really good action sequence
73 people found this helpful

KJCreativeReviewed in the United States on April 22, 2019
5.0 out of 5 stars
Don't listen to the haters!
Verified purchase
Take this film for what it is... a film! Keanu Reeves plays a man who is grief stricken at the loss of his family and does everything in his power to get them back, even as replicas. I read the reviews and expected it to be horrible yet I really enjoyed watching the film. Keanu Reeves is in it so I had to watch it of course; Alice Eve's acting was horrible but luckily we don't have to deal with a lot of it. Has a couple fun little twists and at times it will bring you to tears. I say give it a chance and make your own opinion.
63 people found this helpful

RichReviewed in the United States on April 17, 2019
3.0 out of 5 stars
I, Robot + Chappie = Mixed Feelings
Verified purchase
When I first saw the previews for this movie, I thought it was going to be really good, but instead it left me with mixed emotions by the end. This movie definitely reminded me of I, Robot in the beginning because the robot looks almost exactly the same and the part where they upload a person's life into a robot, pod body to save them reminded me of that movie Chappie. I gave this movie 3 stars because I didn't love it, but I also didn't hate it. I bet Keanu Reeves had a hard time doing this movie after losing his wife due to a car accident. I wish I could say more about this movie without ruining it, but I don't want to spoil everything. I do recommend this movie if you don't have anything better to watch or you're a big Keanu Reeves fan like me and have to see everything he does, but I suggest renting before buying.
30 people found this helpful

BrittanyReviewed in the United States on April 4, 2019
4.0 out of 5 stars
give it a chance
Verified purchase
worth a shot...right!?
32 people found this helpful

Mo DevlinReviewed in the United States on April 24, 2019
1.0 out of 5 stars
Keanu owes me six bucks!!!
Verified purchase
One of the worst, ill conceived, over played, worst acting and STUPIDEST movies I've had the misfortune of buying. Keanu's acting was so stilted and bad that I will never be able to watch the Matrix again without thinking about this klunker. He's doing mind transfers, human cloning and intrigue all in one film...only bad. Save your money and watch ANYTHING else.
20 people found this helpful
See all reviews
Back to top
Get to Know Us
Make Money with Us
Amazon Payment Products
Let Us Help You
EnglishChoose a language for shopping. United StatesChoose a country/region for shopping.
© 1996-2021, Amazon.com, Inc. or its affiliates