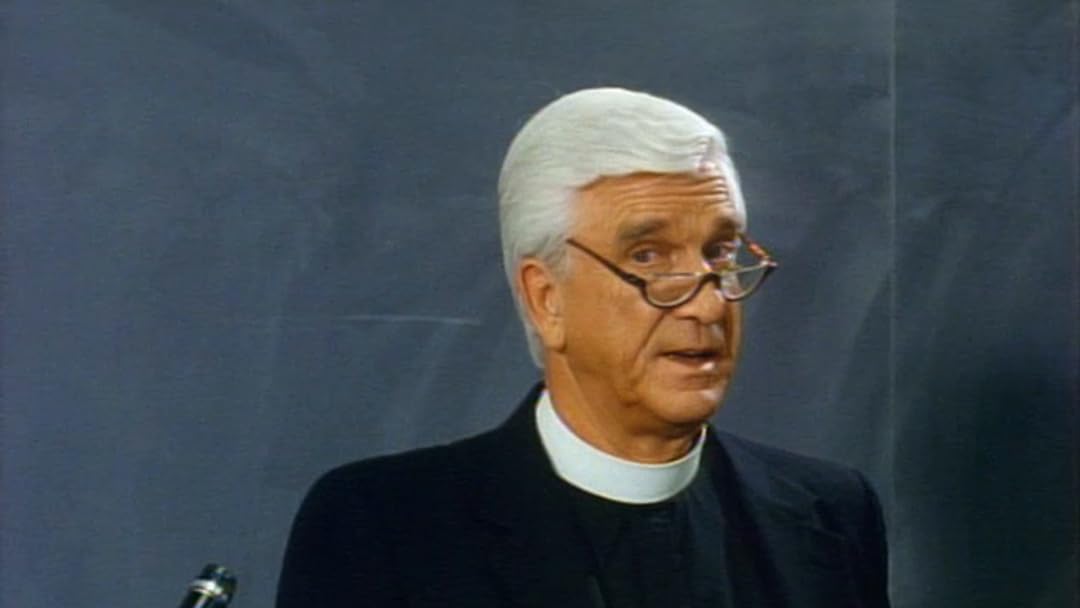 (1,231)
4.81 h 24 min1990PG-13
A parody of "The Exorcist". Linda Blair plays a housewife who becomes possessed by the Devil. Leslie Nielsen plays Father Mayii, who gets called to exorcise the intrusive being.

Wayne ShannonReviewed in the United States on November 3, 2019
2.0 out of 5 stars
Better than nothing. I guess.
Verified purchase
Oof. As a fan of this film going way back, it’s sad to see this film hasn’t been treated with any respect in this release. The film has been either cropped or pan-and-scanned from the original 1.85:1 aspect ratio to a 4:3 ratio.

I’ve only ever seen this on vhs or cable, but I have to believe the print could look better. Given the “budget” nature of the release, I can understand how it wouldn’t be feasible to perform a new scan of an existing negative, so I’m not going to hold that against anyone.

The “trivia track” sounds like it would be fun, but in practice, not so much. Somehow I imagined it would be sort of a “VH1 Pop-up Video” thing, with facts about the movie appearing on screen, but it’s just a series of quizzes about the film. They actually take up a considerable portion of the screen, so it takes away from what is already a cramped presentation, due to the cropping.

Someone really needs to release a decent blu-ray of this film, with some decent supplemental features, and a new scan from a negative. The best way to look at this release is that it’s a decent enough budget placeholder until a better release comes along.

Robert I. HedgesReviewed in the United States on November 26, 2017
2.0 out of 5 stars
See Ned Beatty Get Turned Into A Donkey!
Verified purchase
I love Leslie Nielsen, and admire his dexterity at both drama and comedy. Of course he's now remembered more for the latter, but no matter how good he is he can't save a sinking ship. (He tried in "The Poseidon Adventure" too.) That's how I felt about "Repossessed"; it had a lot of references to the 1980s that will be lost on younger viewers, and even people who do recall the '80s are likely to find much of the script and acting phoned in here. The film is an obvious spoof of "The Exorcist", complete with Linda Blair as the leading lady, Nancy Aglet. The film is littered with cameos, some of which are funny and some of which aren't. My favorite was Robert Fuller as Dr. Hackett, effectively parodying his famous role from "Emergency!" Jesse Ventura's small role was also amusing as he moderates the fight between good and evil. The good cameos are the only things that led me to give the film two stars, as they're the only bright moments in an otherwise dismally unfunny film. (Jack LaLanne's cameo, however, is agonizing.)

Part of the issue is the lack of focus: Director Bob Logan (who also wrote it) gets most of the blame here as he takes a very broad-brushed swipe at everything he can think of, frequently devolving into pathetic jokes like a street address being given as "733 Sex Drive". Oh the hilarity. The number of sophomoric contrived puns is beyond belief (Nielsen plays Father Mayii. I bet you can't see the comedy bonanza that sets up for the next 90 minutes.) There are other offenses here too that just don't work: the awkward lecture format linking device, a rapping priest (groan), Ned Beatty's pink pet poodle in a wood chipper, a golf cart chase, and finally a rock band named "Salvation" which I found absolutely painful. From what I gather, some people consider this the height of comedy in the film, but I found it to be one of the worst scenes ever, particularly as Nielsen dresses and performs as artists as varied as Billy Idol and Michael Jackson. I thought the idea to skewer the over-the-top televangelists could have worked, but the premise was better than the execution which wore out its welcome quickly, like the rest of the film.

The DVD comes with a trailer and a trivia track. I watched the trailer and it's fine; I tried watching the trivia track but found it boring and frankly didn't want to sit through the film again. The entire principal cast has been in better movies, in some cases orders of magnitude better. Certainly Nielsen, Beatty, and Blair have done much better work, and I recommend you check out one of their other movies.
5 people found this helpful

GlitterFlame89Reviewed in the United States on May 27, 2020
5.0 out of 5 stars
One of the BEST parody films out there!
Verified purchase
My best friend and I were obsessed with this movie when we were 9, we thought it was the funniest thing ever. It's a great bit of nostalgia now, still hysterical, and I love that I pick up so much more of the jokes and pop references as an adult. Highly reccommend.
5 people found this helpful

SoapReviewed in the United States on August 16, 2022
1.0 out of 5 stars
Didn't Age Well or Was Never Good
Verified purchase
This was a gift for my father, turns out he had it mixed up with a different better movie instead. We watched it anyway, but it was terrible and completely unfunny. It either aged terribly (I'm too young for many references) or was never funny to begin with (my father didn't laugh either, but he understood more of the references) Wish I could get that however many hours it was back because it was definitely time not well spent.

JamieReviewed in the United States on October 13, 2021
1.0 out of 5 stars
Worst movie I’ve seen in recent memory…
Verified purchase
This definitely makes my list of worst movies ever made. I am suffering the after effects of 84 minutes of brain death and boob jokes. It wasn’t even an hour and a half long but it felt longer than The Phantom Menace. At one point we saw there was half an hour left and felt disappointment it wasn’t over sooner. After it seemed like half an hour had went by, I checked and it only had been 10 minutes. We couldn’t believe it.

John A Lee IIIReviewed in the United States on June 23, 2005
3.0 out of 5 stars
Satan Comes through the TV
Verified purchase
It works for me.

This is a very dated comedy but it is good for a few laughs from those who might remember the cultural references. The emphasis is on "a few laughs". This movie certainly does not live up to the standard set by the NAKED GUN series or to that set by AIRPLANE. That's sad since it is from the same source and Leslie Nielsen plays the lead.

The story is of an exorcist who has gone into retirement after his last successful exorcism of a young girl. Many years later, that girl, now a woman, is repossessed while watching TV. The exorcist is reluctant to come out of retirement and tries to delegate the work to a young priest. The priest winds up getting help from a televangelist at first and then just about every other religious figure imaginable after that. Finally, it is the old exorcist who must save the day.

This show is filled to the brim with lowbrow comedy and sight gags. It is also full of pop and political cultural references from the era in which it was made. If you remember these, you will get a bit more out of it. It also helps to have seen the original EXORCIST.

This is not great comedy but it was somewhat amusing.
19 people found this helpful

Pimp DaddyReviewed in the United States on October 19, 2022
3.0 out of 5 stars
interesting comedy
Verified purchase
Love the exorcist and combine it with a comedy theme is interesting jokes are sorta slap sticky its like Airplane and exorcist met in a bar and duked it out

CReviewed in the United States on March 11, 2021
5.0 out of 5 stars
Cult Classic
Verified purchase
Leslie Nielsen spoof of the Exorcist. Rather funny but not appropriate for youngsters under 13.
3 people found this helpful
See all reviews
Back to top
Get to Know Us
Make Money with Us
Amazon Payment Products
Let Us Help You
EnglishChoose a language for shopping. United StatesChoose a country/region for shopping.
© 1996-2022, Amazon.com, Inc. or its affiliates