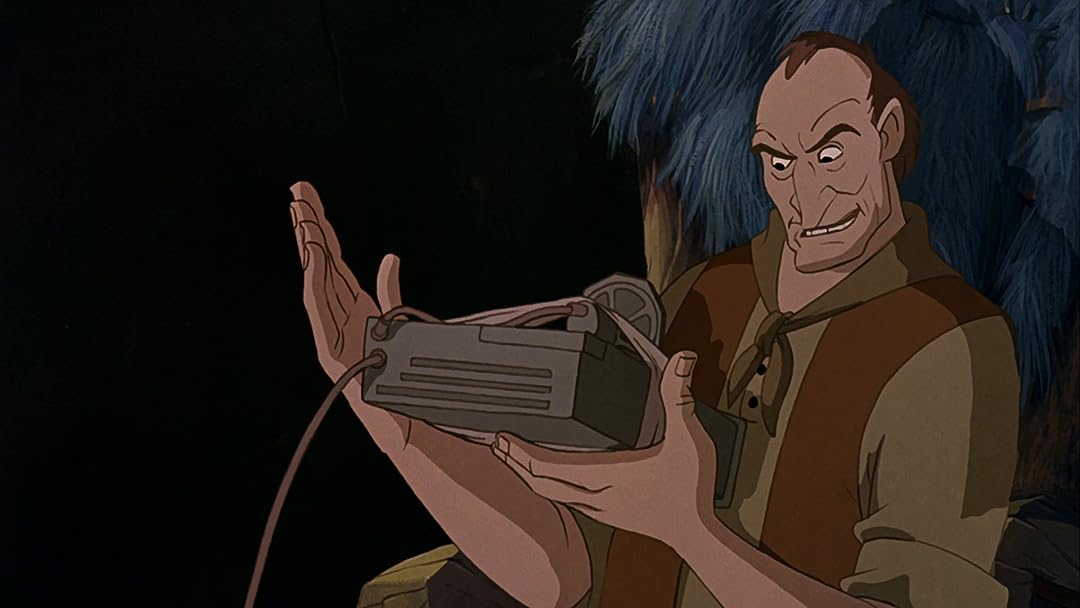 The Rescuers Down Under

Robert L. CochranReviewed in the United States on October 14, 2019
5.0 out of 5 stars
So Nice To See It Again With Closed Captioning!
Verified purchase
I am a deaf individual -- I can't hear. I saw this movie many years ago in a cinema, way back in the early 1970s. At that time, there was no such thing as closed captioning, and cinemas basically didn't care to accommodate the needs of deaf patrons, nor did the movie companies. So there I was sitting in the cinema with all my siblings watching this movie...and not knowing one word of the dialogue. Today, I rented this movie and saw it again many years later -- with closed captioning turned on. At last, I can understand the dialogue that I missed long years ago! I am so happy to know what the different characters were saying in the movie. I note that the animation is truly stunning: it really gets my awed attention to see both sweeping vistas and tiny details. Mr. Schumacher, if you are still around to read this: my compliments to you and your team on a truly stunning and wonderful movie.
6 people found this helpful

MichaelReviewed in the United States on December 11, 2014
4.0 out of 5 stars
"Throw another shrimp on the barbie, girls, 'cause here I come!"
Verified purchase
Disney's reputation as a shameless shiller of sequels had noble origins, when at the height of the company's renaissance it produced an absolutely killer follow-up to one of its more modest classics, [[ASIN:B000096IAI The Rescuers]]. "The Rescuers Down Under" didn't make nearly as much money as the other films of its era, and this probably would have a lot to do with the company's future strategy of releasing most of its sequels straight-to-video, but that belies the fact that this is a superb animated adventure. Though it probably appeals more to a slightly older audience than Disney's tamest fare, its contemporary leanings and large scale mixes well with the company's masterful animation and makes for a gem in Disney's library.

The story: When a greedy poacher (George Scott, [[ASIN:B000EHSVS2 Patton]]) kidnaps a young boy (Adam Ryen, [[ASIN:6302499615 Stepfather 3]]) to coax from him the location of a rare golden eagle, the returning Rescue Aid agents Bernard (Bob Newhart) and Bianca (Eva Gabor) travel to Australia to mount a rescue.

The reason the movie may not have done well financially is that it's so different from its predecessor. The original was moody and thoughtful, with several quiet conversations in the dark and a soft soundtrack that allowed the viewer time to reflect, whereas "Down Under" is bright and bombastic with a speedy pace, plenty of action scenes, and no pop soundtrack. This is hardly the kind of movie an adult would watch to relax, and I can only imagine how it led to kids bouncing off the walls in 1990. However, if this were simply a case of trading in the classic style for a populist cash-in, I'd have a lot less love for the film. It is in fact an earnest adventure movie, featuring plenty of adrenaline scenes but not compromising story development or character integrity. While the original is definitely superior in some regards - a more memorable villain, more time spent focusing on the heroes - the sequel stands soundly on two feet.

As expected, the animation is a joy. Disney's first-ever application of digital coloring techniques pays off, and it is highlighted via incredibly smooth character motion, detailed facial expressions, a wonderfully warm color palette, and maximization o the Australian country landscape. The surprisingly ample computer-generated imagery merges well with the hand-drawn portions, too.

The movie's also pretty nice to listen to, with the actors doing a swell job. Tristan Rogers ("General Hospital") charismatically voices Jake the kangaroo mouse - easily everyone's favorite new character - and he has good chemistry with Eva Gabor, who had the sweetest voice in all of motion pictures. Their coupling takes away from the great rapport that Bob Newhart had with Gabor, but it's a minor disappointment. Oddly, the filmmakers chose American-accented performers to voice Cody and McLeach, the latter of whom doesn't make as much of an impression as he should but is still undeniably evil. Surprisingly, the most impressive character of the bunch has no lines at all: Marahute the eagle is unlike most Disney animals in that she's almost completely feral, with few anthropomorphized features, but is still able to make a very human connection.

Speaking of Marahute, the movie's best scene also represents the filmmakers' worst decision. The film's initial ten minutes are without a doubt its best: after opening with the drum-filled score, we're transported to the scene wherein Cody is taken flying by the eagle, and this is simply one of the best things ever animated. The simulation of flight is nothing short of breathtaking - better than any attempt that even [[ASIN:B00005JLEU Miyazaki]] has made - but it sets an emotional and adrenal standard that the rest of the picture just can't match. It certainly catches my attention from the start, but I think it would have been more effectively placed near the end.

Reportedly, producer Tom Schumacher was crushed when the movie failed to be a big success, and I don't blame him - it's clear that he and the rest of the crew put a ton of hard work into the film, and for audiences to turn it down at the time of its release is a shame. With that said, it's endured nicely and is still a blast to watch today; I hope that Schumacher reads some of the nice reviews it's received, here. The fact that this is one the few films that Disney has had the good taste not to follow up with additional installments is comforting, but even if the Mouse does still decide to do this, the company will have a hard time either improving on or depreciating one of my favorites. I recommend this one to all animation and nostalgia fans.

AWP99Reviewed in the United States on September 22, 2020
5.0 out of 5 stars
Great family movie
Verified purchase
What an excellent family movie. I remember this from when I was a kid and it is still just as excellent watching it as an adult. My family thoroughly enjoyed it and I would whole heartedly recommended to a family looking for a movie night.

Peter PrainitoReviewed in the United States on August 25, 2000
5.0 out of 5 stars
Fly Like an Eagle...literally!
Verified purchase
This movie has a wonderful message about friendship and how precious every life is, be it human or animal. The film has everything going for it; great animation, wonderful background music, and a story that combines humor and high drama. The story is about how an Australian boy named Cody comes to the aid of a beautiful eagle, that was illegally trapped by a poacher named McLeach (George C. Scott), only to find himself later kidnapped by McLeach. Woodland creatures send for help via an elaborate telegraph to a couple of UN delegate mice, named Miss Bianca (Eva Gabor) and Bernard (Bob Newhart) in NYC. Bianca and Bernard enlist the services of a hilarious albatross named Wilbur (John Candy) and set off across the atlantic to...well, rescue Cody. The story even has a little romance between Miss Bianca and Bernard thrown in for good measure. The highlight of the film for me actually comes early. After Cody releases the eagle from the trap, he nearly falls to his death only to be swooped up and taken for the ride of his life by the grateful eagle. Believe me, everytime I view this sequence I get teary eyed. A beautiful film, one of Disney's best!
19 people found this helpful

Suzi JonesReviewed in the United States on April 3, 2011
5.0 out of 5 stars
All Time Favorite
Verified purchase
Though I told my husband I was buying this for my kids, it was really for me! I loved this when it came out and was so glad to see it here on amazon.

It picks up with Benard and Miss Bianca with Benard trying to propose to Miss Bianca! Poor Benard is interupted (not only after dropping the ring and having to get it back) for a case in Down Under to help a little boy from a wretched poacher that is after a rare and beautiful eagle.

Benard must prove himself (so he thinks) to Miss Bianca against the rugged mouseness of their Aussie outback guide. It's a super cute film with the Eva Gabore and Bob Newheart coming back to lend their voices to the unforgetable charcters from the original film.
One person found this helpful

MovieskinnyReviewed in the United States on September 18, 2008
5.0 out of 5 stars
Never saw the first one...But...
Verified purchase
I just wrote a review for Fievel Goes West which was the 2nd in a series of three. Rescuers Down Under is the 2nd also. I don't know if they did a third. I can't imagine how the the first can be better than the second, because this is the first for me to experience, just like Fievel 2. I thought the seconds were fantastic.

Just like Fievel, you got Academy award winning actors. George C. Scott and his gravel voice as the animal poacher in the outback of Australia, and is too good. Scar in the Lion King comes to mind when I think of great voices like George C. Scott. I can't remember who the other actors are in the Rescuers. OK, I just IMDB'd it and no wonder it was great. Bob Newhart, John Candy, Eva Gabor(always great), Billy Barty?(kids don't even know him), and some other well known characters are the real meat of this well done animated flick.

This isn't Pixar magic, but you will like it just as well, and I have all of the Pixar eye candy movies. If you don't enjoy this, maybe you should be watching the Animatrix or something else less fun. Just like Fievel, the Rescuers has actors that us older folks KNOW really well, which enhances our enjoyment, but my daughter watched this a million times for the fun factor. I hate giving stars to movies, but I cannot personally rate it lower than 5*****. You can watch this over and over again, which is my litmus test for movie rating. If you can't watch this again, there's no 5 stars possibility.

The movie is a little dark, like 101 Dalmations. Evil characters doing bad stuff, which is NOT what you see on the cover of this movie case. WOW, happy kids flying on a bird's back, NOT! I personally cannot watch Bambi, Cinderella, or Snow White ever again, but you can watch this time and time again, well hopefully. I'm going to go buy it on DVD now, and toss out my tattered VHS copy. Enjoy!!

DovelyReviewed in the United States on October 2, 2017
5.0 out of 5 stars
Classic favourite
Verified purchase
Just introduced my nearly 4YO to this film on a "stay inside Saturday." It was one of my favourites as a child and appears to be one of hers also. When I told her there was another one, she was excited to watch it as well. Any film that keeps her sitting in one place is amazing, and this did that job! Ordered SD because, well, there's not much point to HD with these old films. Still looked good!

EmilyReviewed in the United States on July 25, 2019
5.0 out of 5 stars
90s classic
Verified purchase
This movie is a national treasure. However the main kid doesn’t have an Australian accent despite being Australian.
See all reviews
Back to top
Get to Know Us
Make Money with Us
Amazon Payment Products
Let Us Help You
EnglishChoose a language for shopping. United StatesChoose a country/region for shopping.
© 1996-2022, Amazon.com, Inc. or its affiliates