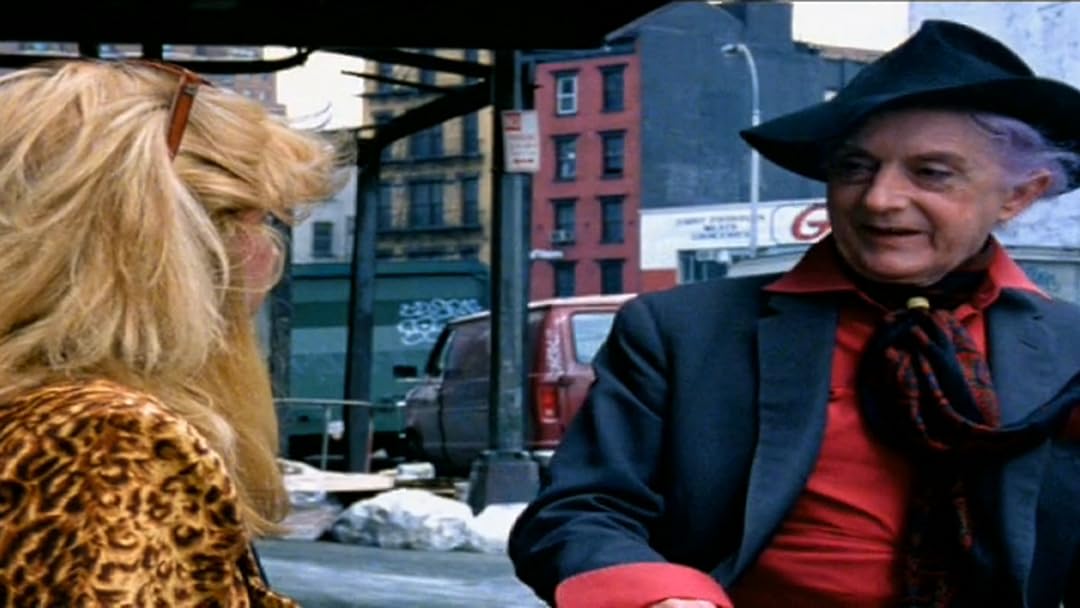 (34)
6.61 h 16 min199118+
The widely acclaimed RESIDENT ALIEN chronicles the adventures of cult figure Quentin Crisp, a flamboyantly eccentric Englishman who once pursued fame across the razor-sharp edges of Manhattan.

Rentals include 30 days to start watching this video and 3 days to finish once started.
Add to
Watchlist
Redeem a gift card or promotion code
By ordering or viewing, you agree to our Terms. Sold by Amazon.com Services LLC.
Write review

Studio
Films Around the World (II)

ClarityOfMindReviewed in the United States on September 23, 2016
2.0 out of 5 stars
Nowhere nearly as good as "the naked civil servant"
Verified purchase
Although Quintin Crisp was in most of the scenes, a lot of creative license was made filming other people and indulging the director's idea of what we wanted where as "the naked civil servant" was a humorous reenactment of actual events in Mr. Crisp's life. I am disappointed for the lost opportunity when we could have had more reenactment of Mr. Crisp and his amazing life… He is gone and we will never know all the other exciting things that happened around him… I appreciate seeing him and ordered this with hopes of more, but the more negative reviews were definitely more accurate. I admire his great spirit and wanted to hear him speak on topics as he has a very clever and polite way of putting things in perspective which are not in a positive light many times... It's a great delight to experience honesty from him and learn of his personal journey through life and it's great difficulties imposed simply because he is different, gay and all the difficult experiences simply because he refused to be a conformist. RIP, dear Mr. Crisp!
One person found this helpful

Attila The SubReviewed in the United States on April 16, 2008
2.0 out of 5 stars
Flawed and pretentious documentary on a brilliant yet humble subject.
Verified purchase
Quentin Crisp was one of the last great wits. A man who lived through two lifetimes worth of adventures, yet this movie comes off flat, strained and art~sy (when it it obvious the director is aiming at art~ful). It would have been better if the director just allowed Mr. Crisp to speak for himself, but instead, we are given shots of people speaking into mirrors and sometimes even through them.
I had such high hopes for this film, but it was a remarkable let down. Still, it is a must for Quentin Crisp fans and I know there are many people who fit into that category. Buy it, if you must, but don't say I didn't warn you.
As a side note, and apropos of nothing, there is a fascinating (perhaps the film's single instance of such an event) and disturbing scene shot in the Bridge Water art gallery in New York. The superb, and at that time unappreciated artist, Patrick Angus, Quentin Crisp and a play-write go to the Bridge Water gallery to show the owner Mr. Angus' work. The gallery owner poo-poos it and dismisses it as overly sexual and not commercial. You can see the utter and undisguised humiliation in Patrick Angus' eyes, the pain of rejection and the almost palpable sense of worthlessness as his paintings are cast aside as so much rubish...the scene is a window into the pain and suffering artists are subjected to each and every day. Mr. Angus died of Aids in 1992 (that scene was shot and took place in 1988) and lived in poverty while his ouvre was only finally understood and appreciated as he lay dying. I suppose that scene alone makes the purchase of this DVD worth~while. For one brief moment, we can all share in the ignominy accorded artists by an all too cruelly-commercial world.

renReviewed in the United States on July 30, 2022
5.0 out of 5 stars
Very funny
Verified purchase
This show is fun to watch and has some very funny parts. I love it!

Stephen Michael DobsonReviewed in the United States on March 13, 2006
4.0 out of 5 stars
An Englishman in New York
Verified purchase
This documentary follows the life of Quentin Crisps life in New York and the people that hung around him. This is a sort of follow up to the 'Naked Civil Servant' and he meets up with John Hurt (the actor who portrayed him) to discuss how this television play changed both their respective lives.

Quentin seems to meet up with people who are equally as eccenteric as he was. For example he meets up with Holly Woodlawn (one of the Warhol 'top trannies') and there is a great deal of gushing that goes on (from la Woodlawn). Quentin is very polite to everyone, but appears to keep his distance and rarely offers any opinions that offend.

Infact Quentin does appear as a sort of by stander as all these fabulous New York artists go about their way and offer their, mostly, favourable opinions about him.

The interersting bits happen irrespective of the documentary, for example he does not meet with an entirely sympathetic audience consisting of elderly lesbian and Gays from New York. They pick him up on his attitude, and although he manages to joke his way out, I liked the fact that they were not as syphocantic as his collegues.

Another interesting section occurs during a chat show where an audience member calls him a form of Freak. Quentin does not bat a mascared eyelid.

The film maker, Mr Nossitor, puts some scenarios into the film which are simply cringeworthy. For example he has Quentin and John Hurt looking at each other in a through a mirror, this is wacky. Quentin also enacts the words from the films of Greta Garbo in a voice, and posture which is supposed to be her. It is if we are spying on a very personal moment.

One must appreciate that Quentin has said a lot of what appears in the film time and time again. He appears to be a willing stooge for the film and this detracts from his dignity.

However, the film is worth watching for Quentin as a documentary of the later part of his life.

Otto A. NielsenReviewed in the United States on December 26, 2013
5.0 out of 5 stars
Great, Just great...
Verified purchase
If you are old enough to remember what New York City looked like when this movie was filmed, you will get a kick out of this one...
Not to say younger people will not enjoy it as well, if you are interested in a bit on NY history and glimpse from the past. The story is wonderful weather you know who Mr. Crisp is or not.....

Paula BauerReviewed in the United States on February 27, 2014
5.0 out of 5 stars
Mr. Crisp!
Verified purchase
With a gift for whitty and entertaining words and a modest presence he helped to change perceptions. Remaining true must have been horrible, yet this wonderful and gracious human endured and conquered. A step or two outside the norm was his normalcy and he held his head high. I would have loved him for a friend.

MossyfrogReviewed in the United States on November 2, 2011
4.0 out of 5 stars
NO CAPTIONING!
Verified purchase
I am getting really tired of labels saying it is closed captioned only to buy it then to discover that it has none.I am Deaf and depend on this.Oh well,can't review if I can't watch even though I am sure Quentin Crisp is great.Just a friendly warning to for others who need Closed Captioning.
7 people found this helpful

A.McClainReviewed in the United States on March 7, 2021
1.0 out of 5 stars
Boring theme I’d like a refund
Verified purchase
I did not like the main character at all the theme is very boring
See all reviews
Back to top
Get to Know Us
Make Money with Us
Amazon Payment Products
Let Us Help You
EnglishChoose a language for shopping. United StatesChoose a country/region for shopping.
© 1996-2022, Amazon.com, Inc. or its affiliates