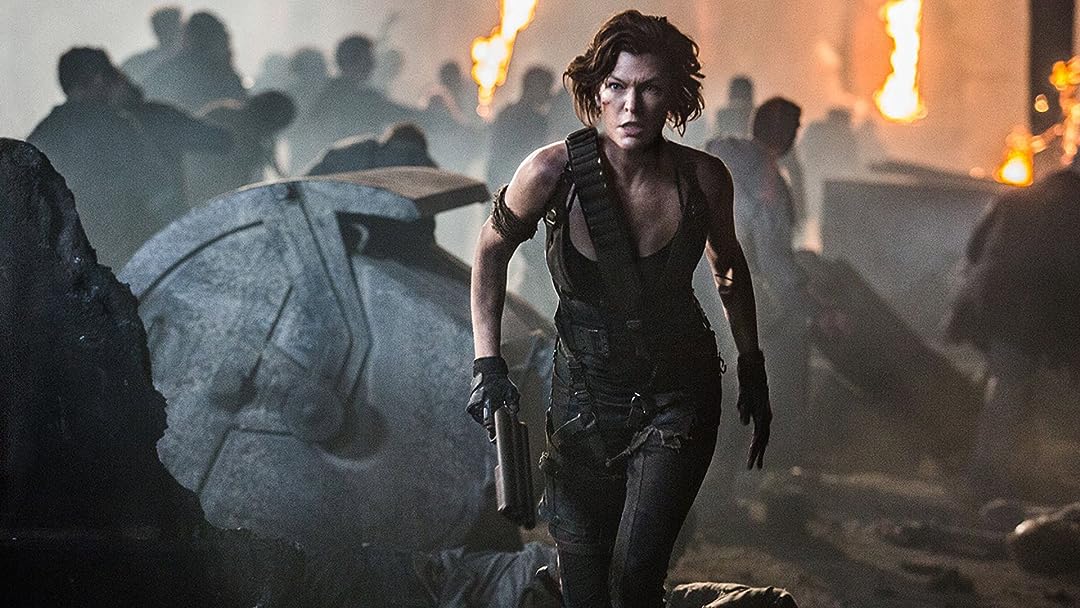 (12,801)5.51 h 46 min2017R
Alice returns to The Hive in Raccoon City, where Umbrella Corp is gathering forces for a final strike against the remaining survivors.

Kid KyotoReviewed in the United States on July 20, 2017
4.0 out of 5 stars
Satisfying finish for the long-running series
Verified purchase
After six films and 15 years the Resident Evil series closes out (with rumors of a reboot already starting). It was a fun ride. In this film Milla Jovovich's Alice once more fights her way through armies of zombies, monsters and goons to save the few remaining human survivors. There's a secret underground lab, a laser corridor, clones, revelations, retcons and director Paul Anderson steals a joke from Robocop. It's a clever joke though so I don't mind. If you've seen any of the previous films (or even the trailers) you know what to expect.

I was a bit disappointed with the opening. The last film left Alice and other survivors in a fortified White House surrounded by endless hordes of zombies. This film opens with Alice in the burnt out ruins of the White House, her friends presumably dead, and goes from there. I really would have liked to see the battle of the White House. Instead we get a battle in a ruined apartment block in Raccoon City which is not nearly as fulfilling.

The ending has some revelations and annoying retcons. Wesker the former Chairman of Umbrella is now a mere employee, Dr Isaacs is promoted from head of the science division to co-founder. We also learn the T-virus was created by a scientist to save his young daughter, but not the scientist who created the T-Virus to save his daughter in the 2nd film, a different scientist, with a different young daughter...

But with secrets, lies and clones these can be waved away. Heck, at this point there's no guarantee that anyone, including Alice, is who they think they are.

I was also saddened to read that the filming was accident-plagued with one accident killing a crew member and another crippling a stunt woman. It tempered my enjoyment, I kind of prefer my horror without real world blood.

But overall, guns, zombies, Jovovich, explosions... Everything you might want to finish off this series.

JustinReviewed in the United States on July 7, 2017
4.0 out of 5 stars
A decent end to an entertaining franchise
Verified purchase
Fitting end for the Resident Evil movie franchise. I admit my interest in watching these movies has been decreasing after each installment that has been released. So I am very happy that before these movies ran our of a budget they were able to make one final installment to this movie franchise. The action was great in this movie and had several fitting call-backs/reference to all the movies that preceded it. This final chapter does fans right, but was still not as great as I wished it would be.

I was very disappointed that the franchise wasn't able to get all the actors/characters back into this final movie, as many stories were either abruptly ended or left unanswered (kind of). I was sad that all the characters who were in the previous movie all ended up in the same place and all basically had the same anticlimactic fate that we find out about at the start. It seems like a disappointing move, but it is understandable considering this was the final installment. I'm not sure if it was a creative decision or if simply most of the actors declined to return. Either way, I still enjoyed this final chapter as I'm sure most fans did as well. I was just hoping it would end on a higher note. But definitely still a must watch for any fan!
15 people found this helpful
Report abuse

TekahWarzReviewed in the United States on March 31, 2018
3.0 out of 5 stars
So Much Potential Wasted
Verified purchase
I watched all of the movies over the course of a week and thought they got better with each release. I loved 4 and 5. However, the Final Chapter was very disappointing on several levels. I was happy enough with the ending, but the overall dark quality of the film along with the shakey camera work and choppy editing of the action scenes made me feel that they were making this on the cheap and did not want to pay to flesh out the CGI / graphics. Also, what happened to the set-up from 5? It felt as though we were jumping into 7, and there was a whole other movie 6 dealing with events in Washington DC that was missed. A botched escape by air at the beginning of the film would have provided more continuity. I also missed the cast from 5. Too many new characters / extras were thrown in just to kill them off. And they wasted the talent of the Korean actor that they cast. Overall, this felt more like a generic slasher film than a resident evil sequel. I am giving it three stars based upon the final 20 minutes of the film and the plot twist that had more potential than was actually fleshed out.
10 people found this helpful
Report abuse

Paul S. PersonReviewed in the United States on January 31, 2021
4.0 out of 5 stars
A Disconnect
Verified purchase
This film is the final one in the original live-action series (provided, of course, the next one actually is a reboot). It is only generally connected to the prior films.
Thus, the good-feeling at the end of the last film is gone. Apparently, the Evil Doctor who appeared to be good was, in fact, Evil, Who'd a thought that?
Also, the guy in the wheel-chair back in the second film reappears -- a lot thinner and a lot taller since he isn't in a wheel-chair any more.
The air-burst at the end of the second film is apparently now a ground-burst which left a nice crater that The Hive can be entered by rather that destroying Raccoon City, as any respectable nuke would do.
And, finally, we are led to believe that, when Our Heroine releases the air-borne antidote that will kill /all/ the zombies, she herself will die. Never mind that she survived when injected with the antidote at the start of the fourth film.
Still, if you ignore these minor continuity errors, the film does provide a definite conclusion to the series. With lots and lots of action, as well.
One person found this helpful
Report abuse

Chris HReviewed in the United States on December 31, 2018
3.0 out of 5 stars
Too dark, too dingy, too many jump cuts
Verified purchase
Jump cuts and shaky cam, two "gritty realism" tricks that demonstrate poor film making. Just keep jerking the image around to give the appearance of action, while really there's little happening, and in any case it is almost impossible to follow. The action sequences in the first movie of this series were much better. So much CGI background, so much detritus as scenery. This has the advantage that if something changes nobody will notice anyway.

The actual story had merit. It doesn't tie in well with the first movies, the 'twist' is both unsurprising and too twisted. Two things common in current movie making, remakes and trashing the cannon. Trashing the cannon allows you to bring in new surprises, but it makes the series inconsistent to those of us who have been around long enough to keep track.
5 people found this helpful
Report abuse

review4Reviewed in the United States on July 17, 2021
5.0 out of 5 stars
One of if not the best in this series! Seriously.
Verified purchase
If you want to go medieval on an army of zombies, this movie will do it. I started watching the series with the first installment, got disappointed and a little bored with the second and third. But then the fourth and fifth installments really kicked in with the zombie war angle and into high gear with incredible creature fights and slick slo-mo action scenes. I think I may have had the most fun with this one as it upped the anti for me to the max.

Here at the end of the series, a devastated apocalyptic world is a foregone conclusion. The opening is inspired with a recap of the essential information necessary from the first five movies in the series needed to better understand what is going on in this chapter. And what a chapter it is.

Say what you want about the series but each episode gets better and better to me. I now love these virus/zombie apocalypse entries more than any other movie in the same genre, and definitely more than the nine seasons of Walking Dead and five of Fear the Walking Dead I waded through. After the real-life horror of the pandemic, corporations working on serums etc., these series is not as much of an unbelievable fantasy as they use to be for me.

This is an EPIC fight. So dim the lights, crank up the sound and join the last war against the zombie hordes in the ruins of a nuked city and devastated world.
Report abuse

ErikaLynnReviewed in the United States on May 14, 2021
3.0 out of 5 stars
Cinematography edits make it VERY hard to watch.
Verified purchase
I’m a fan of the series because it’s over the top nonsensical horror/action. I struggles so hard to watch this one because the shaky camera and split second frame cuts made it very hard to watch without being super nauseous. I has to close my eyes during most action sequences due to the camera issue. Usually RE films are fun to watch specifically for the over the top action sequences…. Other than rewriting pretty much the entire franchise… (shrugs)… and horrible camera work this was a RE movie, so it’s exactly what you expect : Jovovich and the rest kicking ass… I think… I mean, I could hear them kicking ass… (sighs)…
One person found this helpful
Report abuse

Richard CavelleroReviewed in the United States on April 3, 2020
4.0 out of 5 stars
A satisfying if expected send off
Verified purchase
I wish I could say that the franchise ended with the best entry since the first but if I'm being honest, it didn't. It's still enjoyable but more on par with the other sequels just a little more amped up action wise. Jovovich returns for the final time as Alice and this time she's racing against time to try and release the antidote to the T Virus to save the last remaining pockets of human resistance. To do this she must travel back to where it all started in the Umbrella facility. Along the way she picks up a new bunch of victims and faces a whole bunch of new and old horrors. The movie is super action packed, it's a bit too much at times. The twists are intriguing and if the film had ended with the first epic finale it would have been a great send off for the series. That being said it's big, dumb fun and is a satisfying if somewhat expected send off to my beloved franchise.

3.5/5
Report abuse
See all reviews
Back to top
Get to Know Us
Make Money with Us
Amazon Payment Products
Let Us Help You
EnglishChoose a language for shopping. United StatesChoose a country/region for shopping.
© 1996-2021, Amazon.com, Inc. or its affiliates