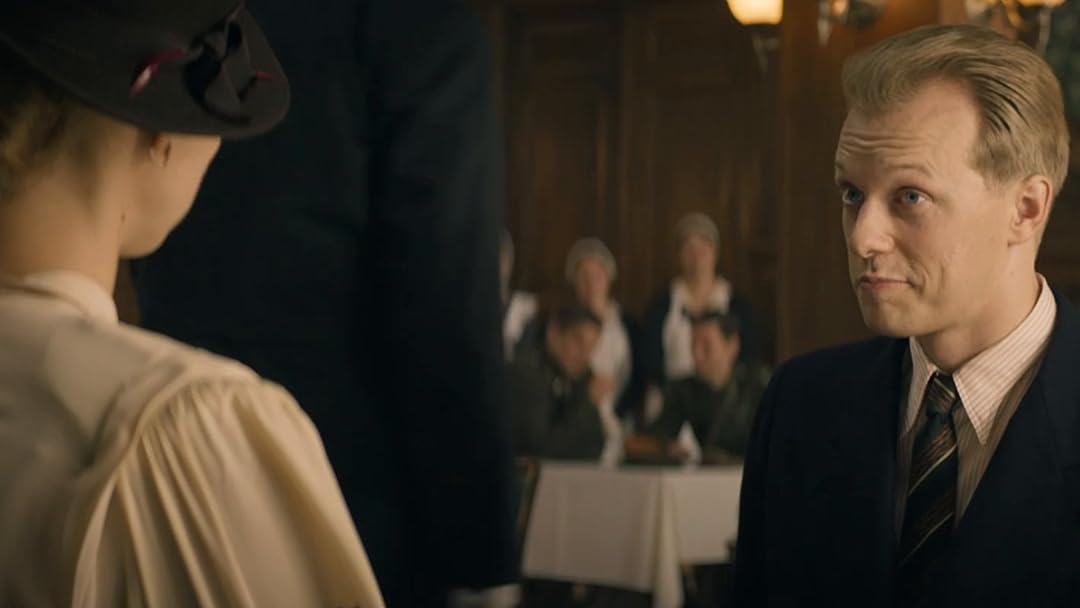 (407)
5.81 h 53 min2020X-Ray16+
The Resistance Fighter tells the incredible true story of the Polish "James Bond" war hero Jan Nowak-Jeziorański, a man of extraordinary courage, who served as an emissary between the commanders of Poland's resistance movement and the Polish government in exile in London at the height of WWII.

David D. MANLEYReviewed in the United States on August 29, 2020
4.0 out of 5 stars
Well-Made Film about a Crucial Moment in Polish History
Verified purchase
This film is a very well-made war film about an important time in Poland's history--the summer of 1944, when Poland's future after WWII was being forged. By focusing the film on the real life character of a Polish courier, Jan Nowak-Jezioranski, between the Polish Government-in-Exile in London and the Polish Home Army in Warsaw, the film seeks to explain to modern audiences the dilemma the Polish resistance found itlelf in, in the summer of 1944. The Home Army is committed to launching an all-or-nothing uprising against the increasingly nervous German occupiers--The Soviet Army was rapidly approaching, the Western Allies had landed in Normandy, and an attempt had been made on Hitler's life by German officers. The courier is sent to tell the Home Army to cancel the uprising because the Western Allies will not, and will not be able to, militarily support the Home Army, and that the Poland was essentially already promised to the Soviets (there is a little bit of anachronistic revisionism in how exactly this is presented in the film), but in reality, and in the film, it is clear that the Poles would be at the mercy of Stalin given where the front lines were located. Much of the film depicts the travails of the courier getting to Warsaw and meeting the Commander of the Home Army to give him this message. Meanwhile, the Germans, apparently in the form of the SD Security Service, have agents tracking the courier's every move in Britain and are reporting these back to Berlin and/or the German authorities in Warsaw. A female German agent casually returns to Warsaw from London to continue the pursuit of the courier. This part of the film is extremely dubious as neither German military intelligence nor the SD were able to operate effectively in Britain by 1944 In this subplot, the SD follows the courier in Warsaw hoping to locate the Command element of the Home Army so they can negotiate with him a joint defense against the Soviets, allegedly on the instructions of Heinrich Himmler. In some scenes it seems they just want to eliminate the Home Army leadership. Whereas Himmler did seek to negotiate with the Western Allies in the (literally) final days of the war, in mid-1944, this is just silly that Himm;er would negotiate with the Home Army or that they would ever trust him. This unrealistic sub-plot apparently was intended to add excitement to the film. After the courier finally briefs the Home Army Command that the Western Allies will not help, the Home Army decides to launch the uprising anyway to demonstrate for future generations that for a brief moment Poland liberated itself. The whole film seemed to be constructed to lead to this scene, which is correctly focused on the Polish audience. If one is interested in Polish history or in the details of WWII history and politics, this film is well worth watching. If you are looking for a straight forward action movie, you might be disappointed. The actual real-life adventures of Jan Nowak-Jezioranski before and after the period covered in this film are quite interesting and it would have been nice to have a 5 or 10-minute biography of him offered as an "extra" on the disc.
31 people found this helpful

Leslie82Reviewed in the United States on August 13, 2020
5.0 out of 5 stars
An exciting movie, a special treat for a history buff
Verified purchase
An exciting movie based closely on the real-life story of Jan Nowak-Jezioranski, who was a wartime (WWII) courier traveling clandestinely between Warsaw (in German-occupied Poland) and London (the seat of the Polish Government-in-Exile).
Made with a great attention to historical detail in plot and scenography. Accurately shows the barbaric treatment of Poles by Germans. (Germans were incomparably more inhumane in Poland than in the occupied Western and Northern European countries, with partially realized plans to exterminate most of the Poles, starting with the educated class. Poland lost 20% of its pre-war population: 6 million people, including 3 million Polish Jews. Just imagine the United States loosing 20% of its population: 65 million people... It's hard to find a Polish family without one or more close relatives killed by Germans.)
30 people found this helpful

James BrunoReviewed in the United States on June 5, 2021
2.0 out of 5 stars
Almost the Dumbest War Movie I've Ever Seen
Verified purchase
The Poles really excel in cinema, not least their movies about WWII (e.g. "Warsaw '44"). This, however, is not one of them. The acting is wooden. The direction is choppy. The plot is full of holes. Undercover agents needlessly draw attention to themselves and spy tradecraft is thrown out the window as operatives out-amateur each other. Gestapo agents disguised as an American GI and a Swedish beauty get around war-torn Europe as if on a Trafalgar tour and their whole purpose for being in this story is as muddled as the plot. 1944 Warsaw is spic 'n' span, neat as a pin and as prosperous-looking as Disneyland. The Russians are closing in. The Germans are rounding people up. So, what does the underground Polish leader say to his deputies? "Let's eat." Oddly, the Polish dialogue is dubbed over, while the German is not. It was an ordeal for this viewer to stick it out for one hour and fifty-three minutes. "The Resistance Fighter" is about as exciting as 10-day old bigos and cold kielbasa.
12 people found this helpful

Madeline DietrichReviewed in the United States on August 29, 2021
4.0 out of 5 stars
In English, German, and Polish dubbed poorly in English
Verified purchase
The original dialog in the film varies from English to German to Polish, and for some reason in this release the Polish has been dubbed into English. If you don't speak German you'll need to turn on English subtitles. But why not keep the original Polish and just let us rely on subtitles for the Polish. I think dubbing the Polish dialog into English takes away from the film's drama and overall effect (that it involves three peoples and three languages, part of the complexity of the circumstances the people involved were dealing with). Other than that the film is ok--costumes and set pieces are pretty good. The story is a little hard to follow at times (again I think if they'd left the Polish in the film would make better sense. Besides, it's about a Polish hero who speaks English and German in addition to his native Polish).
3 people found this helpful

ArweynReviewed in the United States on July 26, 2021
5.0 out of 5 stars
very good
Verified purchase
This movie was about Polish spirit, I loved it. It filled a gap in my ww2 knowledge and pointed out very clearly that:
1. no ally would come to Poland's aid in spite of treaties saying otherwise
2. it was because of the treaties Poland initially didn't fight back, they were waiting for allied help.
3. they were not pushovers and made heroic sacrifices to save their freedom.
4. If the allies had stepped in, at this point, Hitler would have been crushed. What a shame they didn't.

hawkeyedReviewed in the United States on March 26, 2021
5.0 out of 5 stars
Subtitles Fixed!
Verified purchase
Thank you fir fixing the subtitles. Now when the actors speak German, I can read what they are saying. Looking forward to watching the movie. A+ for the effort on fixing the subtitle issue!
10 people found this helpful

Ken StarkReviewed in the United States on September 15, 2020
5.0 out of 5 stars
Great addition to our movie collection
Verified purchase
My wife and I were able to see this movie in our local movie theater and were happy we were able to purchase it at a good price from Amazon and really enjoyed watching it and we are looking forward to watching it as often as we want.
9 people found this helpful
See all reviews
Back to top
Get to Know Us
Make Money with Us
Amazon Payment Products
Let Us Help You
EnglishChoose a language for shopping. United StatesChoose a country/region for shopping.
© 1996-2022, Amazon.com, Inc. or its affiliates