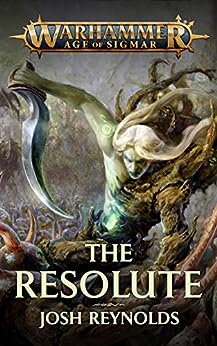 by Josh Reynolds (Author) Format: Kindle Edition
See all formats and editions
Sorry, there was a problem loading this page. Try again.

Alarielle has awoken, and the Sylvaneth march to war! Amidst the ruins of the reedcity of the Gramin, the treerevenant Felyndael and his fellows battle to cleanse their land of the taint of Chaos. Josh Reynolds has a knack for getting to the heart of the inhabitants of the Mortal Realms and telling deeply moving stories of hardship and horror – and this is no exception.

READ IT BECAUSE
The reedcity of Gramin is under attack! At the height of the Age of Chaos, the plague fleets of Nurgle sailed into the Verdant Bay laid siege to this wonder of the Realm of Life, a city created by Alarielle herself – and it fell. Now, the Everqueen has awoken once more, and the Sylvaneth march to war, to reclaim the remains of their city. Felyndael of the Fading Light, treerevenant and hero of his people, leads the attack – but to rout the rotservants will require more than simply martial skill.