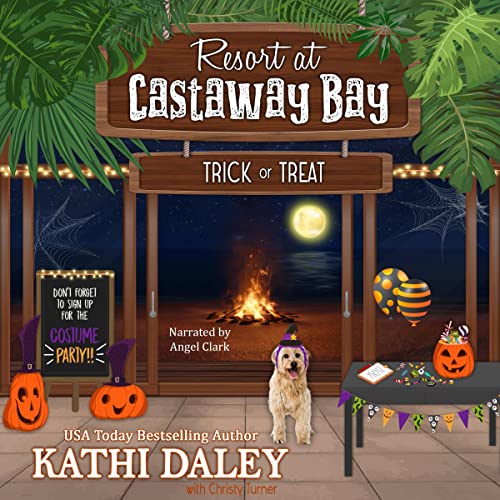 Kathi Daley (Author, Publisher), Angel Clark (Narrator)
4.6 out of 5 stars 1,212 ratings
See all formats and editions
Sorry, there was a problem loading this page. Try again.

Sydney Whitmore, a forensic psychologist, moves to Shipwreck Island and renews her relationship with Ezra Reinhold, a reclusive billionaire who enjoys poking around in cold cases and has the means to hire the best people to find the answers no one else has been able to.

In book 3 in the series, it's Halloween, and Sydney joins Ezra and his group as they take on an old murder case where the suspected killer has been caught and convicted, although Ezra has reason to believe he may be innocent, as he has claimed from the beginning.

Meanwhile, Sam asks Syd and Kelly for input on a case, Syd's friend Riley comes home after months in the hospital with a tale of a coverup, Emily is faced with a nearly impossible decision, Rory has puppies to foster, and Logan settles into life on the island.

Laura S Reading
5.0 out of 5 stars Fascinating. Great balance between cozy and chilling
Reviewed in the United States on October 27, 2021
Verified Purchase
In this third book of the Castaway Bay series, Kathi Daley does a masterful job of combining stark and chilling scenes within a cozy, heart warming family setting.

Syd Whitmore is a valued forensic psychologist for the FBI but the job has drained her, worn her down and she returned to her family for a break and emotional recharge. Now she has decisions to make about her future, including career and living arrangements.
Her childhood best friend is in a similar situation. He loves his job as a medical doctor but his father is getting older and Logan wants to be around for his dad. As a bonus he is reconnecting with Sydney.
This book also has some adorable puppies and a mother dog looking for a new home.

As a side investigation, Syd is working with an elite group of specialists trying to overturn a murder conviction. The murder took place on Halloween and a possible suspect was dressed head to toe as Darth Vader. We get to know more about the team as this series progresses.

As if that is not enough, the local Sheriff also asks for Syd's help on a case.
Plus another case that Syd was involved in when she first arrived has new information.
Lots going on and similarities exist between the cases. Syd works hard at balancing work and family.

This is an exciting and fascinating series.
Read more
One person found this helpful
Helpful
Report abuse

RO G'ma
5.0 out of 5 stars Lots Going On and Decisions To Be Made
Reviewed in the United States on October 26, 2021
Verified Purchase
Trick or Treat is the third book in Kathi Daley’s Resort at Castaway Bay series. The intriguing mystery is well plotted and complex, with no shortage of twists and red herrings to keep the reader engaged and guessing. The West Coast setting is charming, and the well-developed characters are three-dimensional, compassionate, and caring. Ms. Daley’s descriptive writing made me feel like I was right in the midst of the activities and sharing the characters’ tragedies and joys. Christy Turner provides a lifestyle blog with photographs of beautiful pumpkin displays. I highly recommend this series to anyone who enjoys reading well-crafted cozies.

After suffering the consequences of an error in judgment in her job as an FBI forensic psychologist, Sydney Whitmore came home to Shipwreck Island for an extended vacation. Having spent several months on the island with her family, Sydney has realized that she’d like to move back home. Sydney and her sisters, Emily and Rory, were taken in and raised by Aunt Charlie when their parents were killed in an automobile accident. Emily, her two young daughters, and Rory live at Jack’s Hideaway with Aunt Charley and Charley’s father-in-law, Hank Hamilton. Besides helping at the resort, Emily is writing a lifestyle blog. Rory is a veterinary technician who often brings animals in need of extra attention home with her. Logan Alexander, who grew up at the resort, is on the island to care for his ill father, Liam, and is contemplating a permanent move and taking over Henry Collins’ medical practice. Sidney’s friend, Riley Chesterfield, a mugging victim, who was in a coma for months, has finally come home.

Sydney has renewed her relationship with Ezra Reinhold and is currently working with him and his top-of-the-line team of experts to clear the name of Eugene Hatfield, who was convicted of murdering Carl Rubio on Halloween night three years ago. Sidney also helps Shipwreck Island’s sheriff, Sam Stone, with a stabbing on the beach, and Collin asks for her help with a kidnapping near a school.
Read more
Helpful
Report abuse

Cindy B
5.0 out of 5 stars #3 in Castaway Bay series
Reviewed in the United States on November 1, 2021
Verified Purchase
Syd has decided to remain in her hometown near her 2 sisters and her Aunt Charley. She goes to work for Ezra, a recluse who takes on criminal cases with the help of several people who bring their own talents. Syd also makes a deal with her boss to work part-time for the FBI from her new location. Logan is filling in for the town doctor and considering staying permanently. This is a great series with conclusions but ongoing relationships, so I encourage you to start with book 1 in the series.
Read more
One person found this helpful
Helpful
Report abuse

Kay Monk
5.0 out of 5 stars Beware of Darth Vader on Halloween night . . .
Reviewed in the United States on November 2, 2021
Verified Purchase
Trick or Treat is the third book in the wonderful Resort at Castaway Bay cozy mystery series. This is a fun, cozy Halloween read. As with each series written by Kathi Daley, the characters and setting make for an amazing escape from reality. Shipwreck Island sounds like a wonderful place to live or vacation. I love the way Ms. Daley writes in a continuing saga fashion with hints and clues to stories in the future. This book has suspense, love, friendship, and family. I really look forward to reading the next book in this series.
Read more
Helpful
Report abuse

Celest
5.0 out of 5 stars Another great mystery by Kathi Daley
Reviewed in the United States on December 11, 2021
Verified Purchase
It took me awhile to get all of the characters straight in my mind after the last series, because I loved them. Once I got to know them I was really excited about this new series. Syd is a fascinating character and her way of solving mysteries is unique. I know I'm going to love this series just like the others. And as usual the ending was spectacular.
Update: Just found out that this is book 3, lol. Now I'm reading book 1.
Read more
Helpful
Report abuse

Lisa Millett
5.0 out of 5 stars Awesome mystery series
Reviewed in the United States on April 3, 2022
Verified Purchase
I love all of Kathi Daley's books as they are mostly set in small-town America with wonderful characters and relationships. This set has mystery but also such inspiring interactions between the main characters. I love that the author brings in characters from her other series and keeps the pace of the story moving along. Overall I feel that reading a Kathi Daley book is like coming home.
Read more
Helpful
Report abuse

Neena Christianson Martin
5.0 out of 5 stars Halloween murders.
Reviewed in the United States on October 29, 2021
Verified Purchase
Ezra has the team looking into the possible innocence of a man convicted of murder. As they dig into the case they discover that a murder has taken place every Halloween for years. I really enjoy the mixing of characters from several different book series and how well the author blends them together. I also love the blog and craft ideas at the end of each Castaway book.
Read more
Helpful
Report abuse

WaWoman
5.0 out of 5 stars Interesting Whodunit
Reviewed in the United States on October 29, 2021
Verified Purchase
I enjoy seeing how Ezra's team solves cases - old or new. In this case, they're asked to clear the name of a man already in jail for murder - which he says he didn't commit. Sydney is instrumental in this and other cases that come her way. Family and friends are important relationships in these books.
Read more
Helpful
Report abuse
See all reviews

AliR
5.0 out of 5 stars Halloween intrigue
Reviewed in the United Kingdom on October 27, 2021
Verified Purchase
Interesting and intriguing hypothesis to the Halloween murders. I liked how Sydney dealt with the kidnap witness. Always interesting series and very enjoyable.
Read more
Report abuse

Denisa.
5.0 out of 5 stars interesting and fun
Reviewed in the United Kingdom on November 5, 2021
Verified Purchase
This is a really interesting murder mystery series and since it wad Halloween themed it was quite fun to read.
Read more
Report abuse
See all reviews