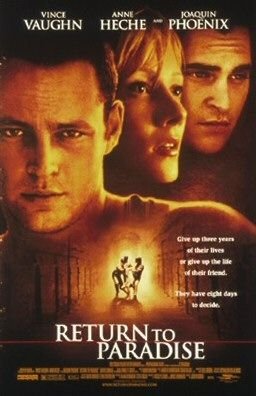 (546)
6.91 h 52 min1998R
They had been three buddies living the high life in a foreign land. Two return to the U.S. and learn years later that their friend is in a Malaysian prison. Will they Return to Paradise?

sefriendlyguyReviewed in the United States on March 17, 2019
3.0 out of 5 stars
stay true to who you are
Verified purchase
in this movie three guys, decide to go party and drink smoke some hash,
but, not in the united states where its illegal, they went to Malaysia
they got over there and had a blast, one of the last few days they are walking up a hill and pulling a bike they rented
as they were walking a truck came driving by and almost hit them and the guys were driven off the road
and into the bushes , the guys are alright but the bike was not, one of the guys kept it and wanted to
take it back, so they can get there deposit back, the other guy decided to just throw it over the hill
remember this, its a very important part of the story, later on in the show two of the guys decides to go back to
the states , one stays there to help out the orangutans, now the show gets started
what happened in Malaysia comes back to bit the guys in ass watch the show, later on
the guy that stayed in Malaysia ends up in prison over there and he is being threatened to be hung ,
but, if the two other guys come back to share responsibility, 3 years a piece prison time, well he will not hang
than there is a female p.i that comes looking for the other two guys to see if they will go back
watch and see if and which one does or does not go back and there is a surprise that blew everyone's mind
in the nedn you may shed a tear and most likely be upset too, but it will pull on your hear t strings

Cindy McLeodReviewed in the United States on November 2, 2021
5.0 out of 5 stars
Gripping, moving, sad
Verified purchase
Not giving the plot away but this movie is about taking resposibility for ones actions. Have the tissue box on hand. Well acted by Joaquin Phoenix. Man,,, you can feel the dispare, fear, even the forgiveness. Then at the end, you feel his calm acceptance of his fate.

michelle allenReviewed in the United States on January 28, 2020
5.0 out of 5 stars
It's good
Verified purchase
I didn't dislike anything in this movie. Joaquin Phoenix's performance in this movie is so .........
Real and believable.....I felt all his emotions and stirrings. He wasn't in the movie much but he consumed the entire film. Oh jeez......I was shocked !
One person found this helpful

Alexander of CaslanoReviewed in the United States on April 30, 2006
5.0 out of 5 stars
Your faults are my faults too.
Verified purchase
This movie is similar to A Long Way From Home.
It's incredible what some people are willing to do in looking for happiness--(the thing that we've got when we were a child,we've lost it or forgotten)then we have to make a hugh round trip to get it back.Some who failed lead themselves into drugs.Some earn money by selling it.Death kills them all.The Big Fish is not caught.What a pity.
(If you really do love animals,don't buy a furcoat.Then there shall be no more extermination of minks,foxes,etc)
If you want to change the world,you have to change yourself.Execution is never a wise solution.It renders the world more unhappy.
In Switzerland,people have voice and voted for life,not death.it's easy when it's not your child.It's a country of Free churches--Free nation.We protected even our animals,we don't shoot stray dogs.We don't hang around people.We jail the defendants for few years even if he committed murder.We'd send him back to his hometown after serving jail.
In some countries, prisoners are tortured.Maybe they even beat their wives and children so to them,you are nothing.It's not necessary to act sadish.In Switzerland,we can't even beat our pets.This IS the real paradise and civilization.
Buy this movie and enjoy bamboo beatings!!
2 people found this helpful

ValvoolReviewed in the United States on July 26, 2019
5.0 out of 5 stars
An old favorite.
Verified purchase
One of my favorite movies from my college days! Great performance by Joaquin Phoenix.
3 people found this helpful

Dinah S.Reviewed in the United States on May 10, 2020
2.0 out of 5 stars
No Captioning for English Language
Verified purchase
The film is advertised as having closed captioning, and it does, but only for the SPANISH language. There is no English language closed captioning option. Very disappointing since I'm deaf and speak English, not Spanish.
One person found this helpful

LuluReviewed in the United States on September 29, 2019
5.0 out of 5 stars
Two thumbs up.
Verified purchase
Great movie! Lost 1st one to a family member who loved the movie, so I ordered another to replace it. Prompt next day delivery with Prime.
2 people found this helpful