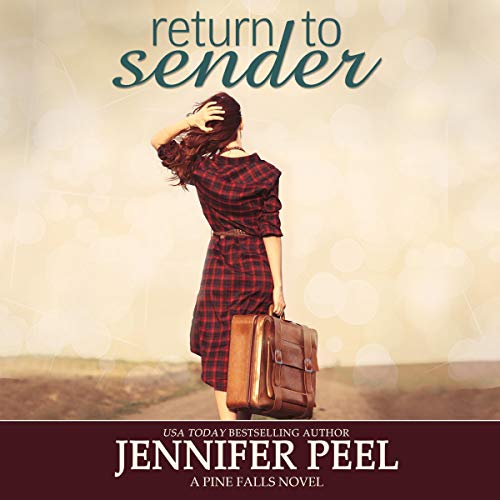 4.5 out of 5 stars
4.5 out of 5
591 global ratings
How are ratings calculated?
To calculate the overall star rating and percentage breakdown by star, we don’t use a simple average. Instead, our system considers things like how recent a review is and if the reviewer bought the item on Amazon. It also analyzes reviews to verify trustworthiness.
Top reviews

Holly Cunningham
5.0 out of 5 stars A must read and reread
Reviewed in the United States on December 27, 2019
Verified Purchase
No one is better then tugging on your heart like Jennifer Peel. This book is so heartfelt. Several times I cried . Jennifer has a way of making her characters so real that you just can't help falling in love with them. You feel the deep pain with the characters but in the end you also feel the triumph. I love the way she also weaves in characters from past books. She has a way of bring her characters to life that they become your friends. Great stand alone book but also feels like part of the Not so wicked series. This book makes you want more so you just have to re-read it.
Read more
13 people found this helpful
Helpful
Report abuse

Reader Mary
5.0 out of 5 stars Emotional Read
Reviewed in the United States on December 27, 2019
Verified Purchase
This book made me cry at 2 in the morning. I simply could not put this book down I had to know if Ariana got her happy ending. She had suffered enough and the struggle she went through to finally get to a healthy happy spot was worth all the lost sleep and tears.
I can’t recommend this book highly enough. A new best from author Jennifer Peel.
Read more
10 people found this helpful
Helpful
Report abuse

Kindle Customer
5.0 out of 5 stars Enjoyable read even if a bit slow to start at first
Reviewed in the United States on December 29, 2019
Verified Purchase
It was a slow start for me. I felt like there were too many characters and love triangles mentioned about side characters (felt a bit too much like, "Hey look, future book spin off set up here! " without seeing what the characters have to offer to this story in the moment) it was a lot happening and to track at first. I had a really difficult time finding Ariana and who she was. Then you realize that she's buried who she is and the beginning makes so much more sense. I really started to catch on to the other characters better but still felt a bit heavy on the spin off hints (not a feeling I felt with any of the other series by Peel). Also at the very start I think some of my disinterest was just the matter of fact way everyone just knew Jonah and Ariana were supposed to be together. It lacked the "will they? Won't they?" hook for me. The pacing of their relationship was quite erratic at first, which was kind of in line with Ariana's struggle but also not. That said, once they got further into their relationship the story really developed and backed off the certainty and kept it interesting.
There are a few cameos of much loved characters from the Not So Wicked Series which was fun! I didn't catch on that this series was the same town until they all showed up.
All in all a great read! It's not my favorite Jennifer Peel book (like I said I struggled to find the characters voice until almost a third of the way through) but still a wonderful story and by the end I was so glad to have read it, I would definitely recommend to a friend.
Read more
6 people found this helpful
Helpful
Report abuse

Carolina Consumer
3.0 out of 5 stars Fair to middling
Reviewed in the United States on October 10, 2020
Verified Purchase
My first book by this author left something to be desired. The writing seemed geared to late teens-young adults, even though the protagonist was an adult in her mid 30's. The main premise of the book seemed far-fetched....a long-ago boyfriend, Jonah, whom Ariana rejected at that time, suddenly shows up 9 years later, divorced and with a 6 year old daughter in tow, still madly in love with her and determined to win her back. A bit unrealistic? She spent those 9 years dressing like a hobo, hiding from real life and any sort of relationships with men, while refusing to seek help for her many emotional problems.But, of course, she was still breathtakingly beautiful. Really? The child, Whitney, was an interesting character, and she did add a sweet and likable component to the story. Jonah was also a well written and very likeable character. I never quite got the gist of Ariana's relationship with her grandparents during her youngest years. Why on earth they would let her live in the conditions she endured was beyond belief, with a flimsy and unbelievable excuse for it given to her when she became an adult. The story seemed to drag with the main theme being Ariana's overwhelming emotional issues, including a mysterious letter that arrived once a year. That particular element added an unexpected twist near the end of the story which was interesting.. This was definitely not one of those books I couldn't wait to get back to....but was more in the venue of my wanting to either just quit reading it, or to keep plugging away so I could finally be done with it. Which I did. All's well that ends well, and this one did...finally.....with enough story-line threads left hanging to lead you to Book #2 in the series, which I probably won't bother with.
Read more
5 people found this helpful
Helpful
Report abuse

Bookwormmom
VINE VOICE
5.0 out of 5 stars All the feels for this book!
Reviewed in the United States on December 31, 2019
Verified Purchase
I’ve been dying to get my hands on this newest book by the talented Jennifer Peel, and although I lost way too much sleep over reading it, every delicious moment was worth it.

From the beginning you are pulled into the story, and can empathize and feel Ariana, the protagonist’s, emotions. Having dealt a lot with childhood trauma, including abuse and neglect, (I’ve been a foster parent for 4 years), her story rang true to me. She is a good person who is still struggling to work through her past, which includes some painful memories that even had me tearing up. Her “sisters” were such great side characters and I can’t wait to read the next book about Dani.

Don’t even get me started on Jonah- wow he was so perfect for Ariana, and definitely brought many swoony moments to the plot. I loved that he was human, and made mistakes, but also that he kept coming back and was so devoted to being there for Ariana. Whitney was also such a sweet part of this book- loved her!

Another fantastic story by Jennifer Peel- you don’t want to miss out on this one!
Read more
3 people found this helpful
Helpful
Report abuse

Room 9
5.0 out of 5 stars Therapy session clothed in romance!
Reviewed in the United States on December 27, 2019
Verified Purchase
If you have ever felt inadequate, rejected or unnecessary this books takes you through those emotions through the eyes of Ariana who is fierce, strong and as tender hearted as they come! Thanks Jennifer Peel for sharing your talent with us! Your books always leave me with a smile and a feeling of having stronger presence in this world as a woman! Thank you!
Read more
5 people found this helpful
Helpful
Report abuse
See all reviews

DeAnna
4.0 out of 5 stars Very enjoyable read
Reviewed in Canada on October 3, 2020
Verified Purchase
Unlike some reviews I read, I did not find this a page turner, but the whole concept of the story kept you going to find out about the letters received every Christmas Eve and returned to sender. There was a lot of pages of conversations and feelings between Ariana and Jonah that were, I thought superfluous, and I skipped many. Jonah seemed to go from being strong, kind and considerate to a panicky wimp if there was the very slightest suggestion that Ariana would leave him. There truly were some odd, and interesting characters in the book, and so many of them had issues. Kinsey and Dani were unbelievably nosy and interfering I felt, albeit done out of love. The fact that the letters kept coming for so many years was a little unbelievable, as was the reunion and bonding of her “new” family, over the top. But, it was quite emotional to read at times, and very moving. Couldn’t quite make out Grandpa and Grandma, and their whole relationship thing, throughout the years. All that being said, I probably will get the next in the series.
Read more
Report abuse

Amazon Customer
5.0 out of 5 stars One of her best books yet!
Reviewed in Canada on December 30, 2019
Verified Purchase
This book hooks you immediately...it’s a stay up late, ignore the laundry, and get annoyed at interruptions kind of book. The characters and the emotions are so well developed and expressed, you sink into their world and feel right along with them. Excellent book, and one that I will happily read again and again.
Read more
One person found this helpful
Report abuse
See all reviews
Back to top
Get to Know Us
Make Money with Us
Amazon Payment Products
Let Us Help You
EnglishChoose a language for shopping. United StatesChoose a country/region for shopping.
© 1996-2021, Amazon.com, Inc. or its affiliates