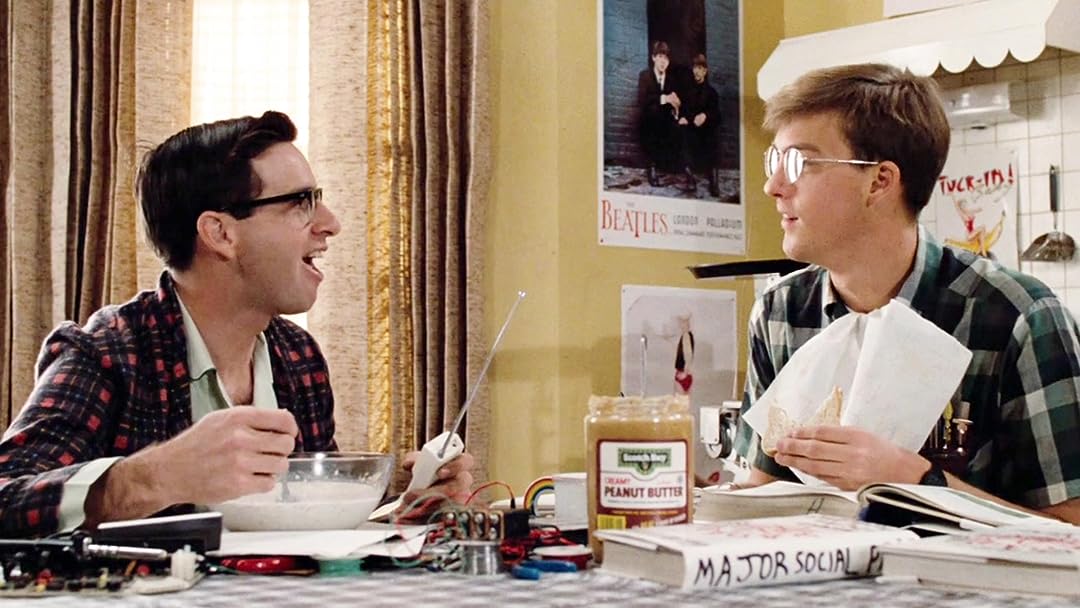 Revenge of the Nerds

Mr. JReviewed in the United States on August 15, 2018
3.0 out of 5 stars
WARNING: This is NOT the original edit of the movie
Verified purchase
Like the DVD release before it, this Blu-Ray version is missing part of the scene where Lewis first discovers the house for rent and also the scene where the the nerds walk up to their (future) house. The music is cut abruptly, and the scene is cut down very awkwardly. And why? Apparently the scene was cut because the yard sign included a non-"555" number and there is a rule that it can't be shown. It doesn't even have an area code. Why didn't Fox pay to have the number digitally removed or altered? If you want to see the full version, It's only available on the ORIGINAL VHS released in 1984 and possibly on the original Laser Disc. Do not buy later releases on VHS thinking they will be complete.

This desperately needs to be re-mastered. I'll stick to the VHS. What a waste.

Oh, I gave it 3 stars because I know a lot of folks won't read 1 or 2 star reviews. It's actually zero stars for this Blu-Ray dud.

JulianReviewed in the United States on July 7, 2016
5.0 out of 5 stars
Classic 80's College Flick 4.5*
Verified purchase
The birth of the nerd, the rise and revenge against the socially worshipped jock, times certainly have changed. Now it is the nerds, the "Mark Zuckerberg" types who are worshipped around college campuses. Back in a time where movies like this started to blow up, of course lit by the fire that Animal House started, we saw some great (if not clichéd) college comedies, Real Genius, Back to School etc.

Something about the "Snobs vs Slobs" trope makes us helplessly root for the underdog every time, the caddies, the outcasts, the nerds. While this movie does spend a bit too much time at the end trying to preach, it delivers a hilariously good time with a perfectly dated 1980's setting and soundtrack, an early look at John Goodman and what ended up being Robert Carradine's most iconic role (he would go on to star in 3 less successful sequels).

Grab a couple buds, a couple brews and throw on Revenge of the Nerds for some old school 80's comedy fun.
8 people found this helpful

R. GawlittaReviewed in the United States on July 30, 2014
5.0 out of 5 stars
Nerds, 1; Jocks, 0
Verified purchase
One of the greatest cult classics of all time, the studios didn't know what to do with it. Small early releases resulted in an amazing rash of critical acclaim, and a wider release and an unusual money maker for the studio. What does that tell you? It tells me that the studios don't really know what the hell the public wants. I like this film a lot, and nerds like myself aren't afraid to laugh at ourselves.

It's a sweet film, hilarious and sensitive at the same time. The Blu transfer doesn't really make a huge difference, but it's still a film I will watch again, often, for the feel-good sensation. Great cast, dedicated to the premise that nothing is more fun than little guys beating up the hierarchy (in this case, the jocks). We all know people like this. Let's even the plane.
7 people found this helpful

Bob NReviewed in the United States on August 16, 2019
5.0 out of 5 stars
Fun Movie
Verified purchase
Hadn't seen the movies in years, but it seems to have held up well. Not a family movie for young children due to some nudity and language. However, it is still a fun movie with a good message at the end of the movie, which if followed would certainly reduce bullying.
One person found this helpful

oldpinkReviewed in the United States on July 18, 2011
5.0 out of 5 stars
Still funny after all these years
Verified purchase
There were lots of movies from the 1980s that were oriented toward the younger male audience, some of them just okay ("Bachelor Party"), some of them awful ("Porkies"), and some of them great.
This fits into the latter category.
As anyone could guess without having seen it already, this is a story about how some of the "uncool" people on a college campus get back at all the "beautiful people" and triumph in the end.
The two main characters are Lewis (played by Robert Carradine) and Gilbert (played by Anthony Edwards, yes, THAT Anthony Edwards), two dorky kids just starting their freshman year at Adams College.
Once they arrive, they quickly learn that the jocks and cheerleaders aren't going to make their stay there anything but miserable, including a loud, jeering "NERDS!" from the muscle man of the jocks, "Ogre" (played by Donald Gibb).
The core actors of the movie are coke bottle glasses wearing Poindexter (Tim Busfield), flamboyantly gay Lamar (Larry B. Scott), elementary school aged Wormser (Andrew Cassese), Japanese Takashi (Brian Tochi), and ultra-slob Booger (Curtis Armstrong).
Insult after insult rains down on the nerds, until they decide to try and work within the system, seeking to start their own fraternity, but finding that the "beautiful people" in charge of the Greek Council reject them out of hand without a national sponsor.
The nerds then go on a search for a national sponsor, getting rejected by all but the one to which they forget to include a group photo in their application, that fraternity being Lambda Lambda Lambda.
They are accepted on a sixty day probationary status with the sponsor, contingent on satisfying the sponsor after that period.
Along the way, the nerds are faced with no choice but to retaliate, and retaliate HARD, against the jocks and cheerleaders.
I won't give away any more, since I don't like people spoiling good movies for others, but let me just say that my favorite scene is near the very end, when several NON-NERD members of Lambda Lambda Lambda show up to back up their nerd brothers.
The funny thing about this movie is that, yes, it's got lots of gross and sexual jokes, but not quite as excessive as in lots of movies of today, yet at the center of the story is a surprisingly worthwhile message about treating people who are different well.
It's hilarious, sometimes sophomoric, but in the end, it's just a great movie.
You get lots of nice extras with the movie, including a commentary track from director Jeff Kanew and actors Tim Busfield, Robert Carradine, and Curtis Armstrong.
You also get a nice featurette, "I'm A Nerd, And I'm Pretty Proud Of It," that runs just over forty minutes.
You also get several deleted scenes, some of which are amusing, but watching them convinced me that the editors made the right choice by leaving them on the cutting room floor.
You also get the (sorry, but very forgettable) TV pilot for "Revenge Of The Nerds."
Lastly, you get the trailers for both "ROTN" and "ROTN II (Nerds In Paradise)."
One word of caution for those of you with youngsters is that there is some strong language (occasional f-bombs, s-word, etc.) along with some sexual references.
More importantly, there is also some brief full frontal (both up and down) nudity, so approach with caution.

james tonkinsonReviewed in the United States on February 20, 2018
5.0 out of 5 stars
Great Movie, Good Audio Commentary Track.
Verified purchase
Still funny after all these years but would never be made today. Too many things would be too un PC. This edition has a nice commentary track and a few extra scenes that were cut.
4 people found this helpful

RichReviewed in the United States on July 18, 2015
5.0 out of 5 stars
Classic movies fade, but never die!
Verified purchase
This movie will always be a cult classic! I loved this movie growing up and still do. I know it's old and out of date for every new generation, but it will always be remembered because there's always going to be someone to tell the youngsters about this great old classic. I wish Hollywood still made funny movies like this, but times change. If there's any youngster(s) out there looking for funny cult classics and you haven't seen this, then I highly recommend you check this out. Who knows, maybe you'll like it so much you will be one to recommend it to your friends or kids growing up and help keep these ancient classics alive and remembered. Go nerds!!
6 people found this helpful

Chris JessonReviewed in the United States on July 2, 2021
5.0 out of 5 stars
Awesome 80s comedy classic
Verified purchase
As expected, another 80's classic that I wanted to add to my digital library, loved finding a great film at a reasonable cost. Note for sensitive viewers, if you didn't grow up in the 80s, this movie didn't age well. I loved it as a nostalgic piece from a different time.
See all reviews
Back to top
Get to Know Us
Make Money with Us
Amazon Payment Products
Let Us Help You
EnglishChoose a language for shopping. United StatesChoose a country/region for shopping.
© 1996-2021, Amazon.com, Inc. or its affiliates