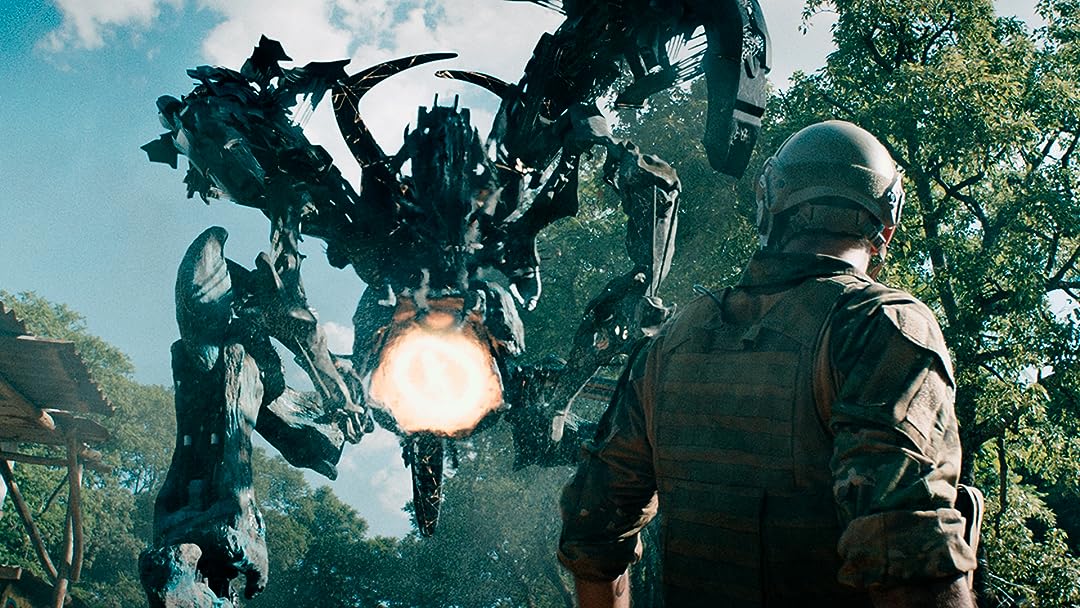 (280)
1 h 27 min2017R
Once foreigners to each other, a U.S. soldier and a French doctor team up to survive an Earth-shattering alien attack.

Writing HistorianReviewed in the United States on December 16, 2017
4.0 out of 5 stars
Better than Expected
Verified purchase
Much better than I expected after reading the reviews, but I am glad that I rented rather than bought this movie. Special effects werent great nor were they terrible. Enjoyed the African setting as sci-fi flicks normally avoid that region because everyone knows Aliens only land in the United States or near Stonehenge...

My daughter got interested in it about halfway through and made her date wait on her so she could see the ending.

Minus one star for some small failures to observe the laws of physics - such factory lights remaining on following a nearby EMP explosion.

NULLReviewed in the United States on January 5, 2018
4.0 out of 5 stars
Good Science Fiction Survivalist Flick
Verified purchase
Overall, for scifi addicts, this is worth watching. Sci-Fi usually falls under two types: So bad it's pitiful and decent to good. This is a case of the latter. The film moves along at a decent clip, but more information about what was going on would have been nice. That's where a sequel comes in I guess.

For a scifi flick it was good. It past the Scifi litmus test:

1. Good mystery into the science fiction aspect--invader drones
2. Strategy: Trying to figure out what the enemy weaknesses were.
3. A journey and how the characters solved problems
4. Great FX. Top notch.
5. Leaves open ending for a good sequel.

Acting was good. The plot was a little thin, and there was no ground breaking attempted. It follows a generic alien invasion formula, but the lead character commanded attention and was good, as was the other main character. I didn't see any glaring problems with tactics or the use of military hardware, except in the end the pineapple grenades. Those have not been used since 1969. I guess they could have been surplus. Everything else was accurate, except why keep shooting at the drones when rifle fire simply bounces off?

One other thing. The main plot was to find some weakness in the drones. That was easy. Shoulder fired rockets (kinetic energy weapons) and grenades took them down easily. That would mean the entire worlds arsenal of kinetic weapons would suffice as a counter weapons system, such as the A10 Warthog's 30mm cannon, presumably the .50 cal BMG, artillery, mortars, mines, guided missals, bombs, and nuclear weapons too. However, in fairness, the film never got far enough along to be that specific or into the reasons why those weapons were not deployed or why they failed in a counter attack.

minnesota readerReviewed in the United States on December 24, 2017
5.0 out of 5 stars
Action-packed science fiction adventure
Verified purchase
The movie begins right in the middle of a combat scene. And it is pure combat adrenaline all the way through. The heroic central figure is American special forces soldier who suffers from amnesia. Earth has been invaded by a race of technologically advanced alien robots. Their firepower and communications are greatly in advance of anything humans have. Unlike movies such as "war of the worlds" these aliens don't really have a weakness, but they can be killed if you apply enough firepower. There are a couple of scenes where humans organize and ambush a single alien. In the last scene of the movie, the humans finally get it right and apply the right tool for the job.
5 people found this helpful

VoidEngReviewed in the United States on November 28, 2018
4.0 out of 5 stars
Poorly Marketed
Verified purchase
This was a serious drama in a Sci-Fi setting. The people who would like the film would over look it as a military action fantasy, people looking for an action film will only be disappointed. The setting is good, the acting is good, the story is good. It was much better than I would have expected it to be.
4 people found this helpful

By_Rant_Or_Ruin - truth.Reviewed in the United States on January 27, 2018
4.0 out of 5 stars
Pick it apart, that is half the fun.
Verified purchase
This film was far better than I thought I would be. I like some low budget gems - this is no gem, BUT, it is worth a sci-fi loving watch or two. I think it was worth the money. There are missing and unexploited paths to the plot but I expected that caveat. Imagination must be a strong suit to make this film worth it. Get some coffee, snacks and pick it apart like a true sci-fi master should. That is half the fun.
4 people found this helpful

NETroyReviewed in the United States on December 24, 2017
2.0 out of 5 stars
Overwhelmed by Cringe-worthy Dialogue and Technical Goofs
Verified purchase
Disclaimer: It's Christmas eve, eve 2017, and I have a cold. I can't sleep, so I'm trying to make it through Revolt while I type up a review simply because I can. This has, clearly, become far too detailed for a film that could easily been avoided, but it's also become a bit of a primer of the Cinema Sins variety. So, if you're going to sit through Revolt, take this along with you, and then let me know how many times you hit skip. Be honest. I'll know if you're lying.

Pros:
1. The design of the machines and their mechanics is an interesting take on the good ol' alien invasion theme - dainty ten ton critters that are at once bird-like and worthy of death by Ewok. I'm not sure that chrome is the way to go by way of camouflage, but hey, if you have a death ray maybe you don't need to fly casual.
2. Carsten Richter has a way with creating sound, and he does not disappoint in this film, not one bit. (However... see 2 below.)
3. Long, patient shots of the landscape, which make the film feel perhaps less 'action sci-fi' than it is. It's not Out of Africa, but it has its moments.
4. Interesting post apocalyptic sets. (That's a bland thing to say in the 'pro' section, but I'm digging a little here.
5. A really nice redesign on the classic notion of the death ray - characters who are mercifully atomized so as to get out of another day of filming, do so with style - it's generally a gorgeous and well thought out effect with a couple of clunky exceptions. CGI does not fail here, though later... oh later.
6. Nicely put together soundtrack that doesn't overwhelm the film until it goes full Thunderdome (see below).
7. Alien Tornado. Sounds stupid, looks cool.
8. Generally speaking the CGI is a bit over used where practical (expensive) effects should have been utilized - with a few notable exceptions.
As previously mentioned: Atomizer ray, awesome. Alien Tornado... sweet. And... the electrified alien tatanka stampede (right after the tornado) - is a powerful and very grounding visual that is really, really well done. Better seen than read... going back over these sentences would keep me away from this film entirely, and these are the PROS. Yeep.
9. Wandile Molebatsi. (And while most of his screen time was wasted on silly exposition, he's just cool af. More Wandile, please movie. Please!)
10. I feel like there should be a ten... but I really can't find one in the Pros section. Sorry movie.

I made it. Admittedly, I skipped the "sticks and stones rave" toward the end because it's getting late and my head feels like it's stuffed with Kenyan wheat... but I made it all for you constant reader. I hope you get the giggling price of admission out of this review at the very least.
15 people found this helpful

Ibrahim BulinskiReviewed in the United States on December 25, 2017
4.0 out of 5 stars
Watch it if you like Scifi
Verified purchase
Well made independent movie.
One person found this helpful

AZCJReviewed in the United States on November 25, 2017
4.0 out of 5 stars
Entertaining
Verified purchase
Well acted. Special effects are decent, but not much of a backstory. It kept me entertained though.
2 people found this helpful
See all reviews
Back to top
Get to Know Us
Make Money with Us
Amazon Payment Products
Let Us Help You
EnglishChoose a language for shopping. United StatesChoose a country/region for shopping.
© 1996-2022, Amazon.com, Inc. or its affiliates