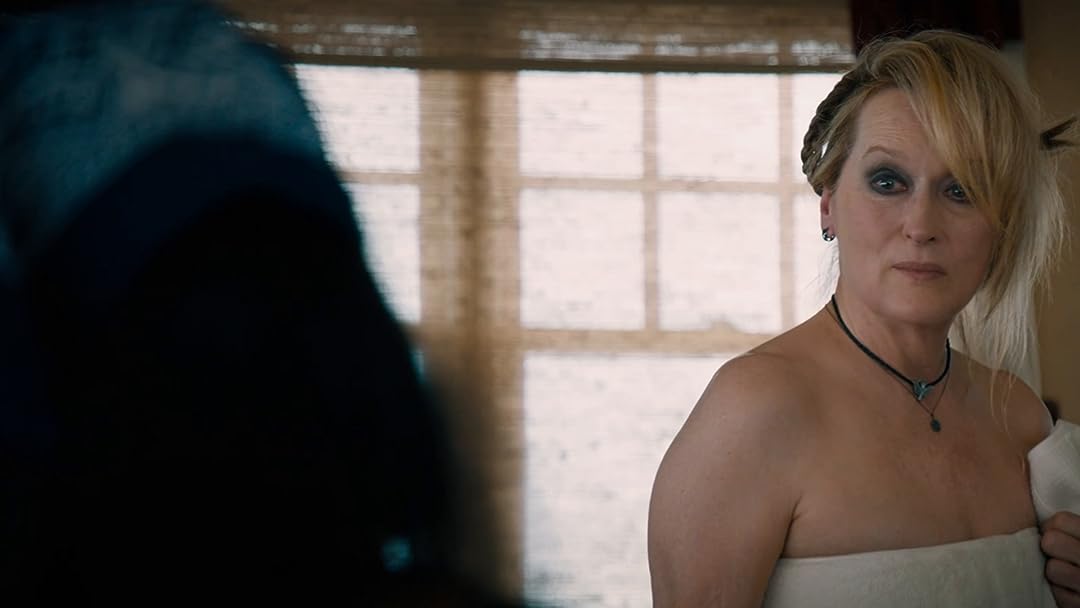 Ricki And The Flash

(1,693)5.91 h 41 min2015X-RayPG-13
A heart-warming comedy, starring Meryl Streep, about family coming together and experiencing the redemptive power of love and rock n' roll.

Walker, Reviewer and ArtistReviewed in the United States on February 13, 2016
3.0 out of 5 stars
"A" for effort, terrible plot
Verified purchase
Well, Meryl Streep, as Ricki, is a truly gifted actor and did her part in this movie as usual. My wife liked the entire movie. A cast of over sixty supporting actors including Kevin Kline, Rick Springfield and Audra McDonald helped move the plot along. But honestly, the script was formulaic and entirely predictable which was a surprise since the writer, Diablo Cody, wrote "Juno". Meryl plays a musician who gave up everything for her dream of rock-and-roll stardom, returns home and tries to make things right with her family. Ricki returns home but the reconciliation fails. Ashamed, Ricki returns to her band in California angry and bitter, insulting her guitarist who is in love with her. He makes her realize he cares and they make love. Ricki receives an invitation to the son's wedding as an olive branch from the family, but Ricki can't afford to go. Her boyfriend sells his best guitar to pay for the tickets. The last scenes, spoiler alert, is played out a little like the end of "Dirty Dancing". Streep learn to play the guitar for the movie (lessons from Neil Young) and sings, no surprise remembering her in "Mama Mia" and "Into the Woods". Watching Streep sing covers for several rock & roll numbers is actually the centerpiece of the movie. Rotten Tomato gave the movie a score of 64%, surprising since "Mama Mia" only got a score of 54%. Does that me it was better than "Mama Mia"? Hardly! So, if you and your wife are looking for a movie tonight consider this but don't mention it as a suggestion. Meryl Streep recorded 12 cover songs and spent at least 6 months working on her guitar playing skills. So if you must watch concentrate on Streep performance in front of a live audience with no playback being used to enhance her vocals. Got to give her an "A" for effort.
11 people found this helpful

NightingalesReviewed in the United States on March 28, 2016
3.0 out of 5 stars
Meryl pulls off a great portrayal!
Verified purchase
I'd give this movie a 3.5 if I could. That said, Meryl deserves 5 stars hands down. I am amazed how she portays the aging, not very successful rock musician Rikki - the breadth of her talent is really amazing. She even nails the singing and guitar playing. So why not 5 stars? While I love the acting of her real-life daughter Mamie, my long-time favorite Kevin Kline falls a bit short of his usual talent in this film. And the story line is just so predictable, it's a bit embarrassing. Granted, there are some deep moments and in example Rick Springfield's great quote "It's not your kids job to love you but your job as a parent to love them", but overall the plot stumbles along too clichéd, predictable and too heavy-handed.

Still, it was a fun movie to watch and some great rock music played. I would recommend it if you're not looking for something really deep like Meryl's many other movies.

Sandra L WieneckeReviewed in the United States on October 28, 2020
3.0 out of 5 stars
Just Ok
Verified purchase
I kinda liked it but it was a weird story. It didn't really go into anyone's story deep enough to really to care. The most real part was casting Rick Springfield as an aging rocker still out there living the life. It was cool see Meryl Streep portray this type of character as well and actually sing the songs. But the story time is short so I thought it was odd that they would continue show "Ricki" literally sing entire songs during her performance scenes. They could have cut that time and added more depth to it.

Russell SReviewed in the United States on December 22, 2016
4.0 out of 5 stars
Nothing revolutionary but fun.
Verified purchase
There was nothing extraordinary about this movie. It was entertaining , yes, but not what I would say....surprising. Meryl Streep is as always sensational but why she had to sing so much? I do like her voice but so much. Meryl plays a rocker mom who left her family many years before. Kevin Kline, her ex-husband, calls her to try to help her daughter out of the funk she is in because her fiancée dumped her just before the wedding. The daughter is angry and still not really has forgiven her mother. This is one of those movies where she is herself, a poor and rather raw character and she has to get through to her daughter and 2 sons. There is also a new wife in the mix who is openly hostile and has her nose way up in the air. it is amusing at times and I did like it but don't expect any real surprises, the supporting cast are all on target too.
2 people found this helpful

Jean O'BoyleReviewed in the United States on November 28, 2020
4.0 out of 5 stars
Meryl can't miss a beat, once again ...
Verified purchase
I found her to be believable as an aging rocker trying to live as her true self, even if she's stuck between two worlds.

While she & Rick Springfield are fun together, she also tries hard to stay close to the grown children she left behind, along with their father. It's interesting to see how Audra McDonald plays an Eve type to Meryl's Lilith figure.

I recommend this movie as a good casual watch.

passionatereaderReviewed in the United States on November 26, 2015
3.0 out of 5 stars
Meryl will try anything
Verified purchase
Meryl will try anything and for that I give her credit. She's one of the all-time best actors and in this little movie she sings and rocks out with Rick Springfield. She hasn't appeared with Kevin Kline since "Sophie's Choice" for which she won an Academy Award, I believe. Kevin Kline is a cipher in this movie as is Rick Springfield, but he is adorable. Mamie Gummer, Meryl's real daughter is good in this, maybe better than her mom.....
I am rewatching it today. It isn't worth owning, so I'm glad I just rented it. It's pretty silly and some may find it fun. I liked Meryl best in movies like
Devil Wears Prada, or Out of Africa, or even A Love Story with DeNiro. This reminded me of Mama Mia but not in a good way. The music is lots of fun, though, some real oldies but goodies.
One person found this helpful

J. V. MillerReviewed in the United States on June 5, 2016
4.0 out of 5 stars
A Sleeper That Should Not Be Overlooked.
Verified purchase
Meryl Streep never fails to inspire. Kevin Kline is wonderfully predictable. And Rick Springfield gave a nuanced performance of a hard core rocker with a gentle soul. A slice of life story about finding oneself, one's passion and not achieving the expected success. Ricki made selfish choices and now finds herself needing to mend relationships with her ex-husband, her children; even her husband's second wife. She also needs to resolve her relationship with her boyfriend. It all could have been sappy, but the incredible cast made the script sing, the dysfunction real, and the resolution as such, believable. Mamie Gunn, Streep's real life daughter has her mother's talent.
3 people found this helpful

layylaReviewed in the United States on December 6, 2015
2.0 out of 5 stars
Not what it should have been given the talent that made it.
Verified purchase
This movie just isn't what it should be given the superior cast, outstanding director, and a script by the author of Juno. First, I must say that while Meryl Streep is probably the greatest actress of her generation, she just isn't a singer. I don't enjoy listening to her and thought that she ruined Mama Mia. The script falls flat and is cliched at the same time. I kept thinking that the script wasn't really exploring the character of Ricki as anything more than a one-dimentional character. The ending totally didn't work for me. I just didn't buy it that her children suddenly got over all of their anger over her abandonment of her family.
One person found this helpful
See all reviews
Back to top
Get to Know Us
Make Money with Us
Amazon Payment Products
Let Us Help You
EnglishChoose a language for shopping. United StatesChoose a country/region for shopping.
© 1996-2021, Amazon.com, Inc. or its affiliates