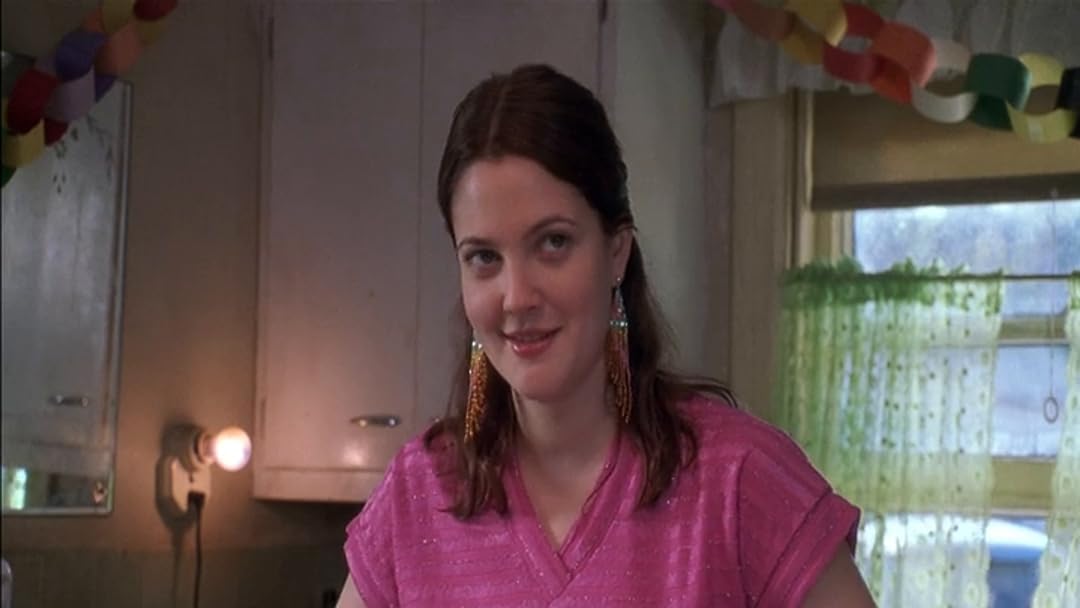 Riding in Cars with Boys

JohnicaReviewed in the United States on September 8, 2021
1.0 out of 5 stars
Two hours of boring to finally see character development
Verified purchase
For over TWO HOURS of this movie, Drew Barrymore was portrayed as a TERRIBLE mother. Ignoring her kid while doing drugs, kicking him out of the house without even a decent coat while she dried weed, making him do most/all of the household chores at age 10 while she says, "We're supposed to be a team," and he says, "No, you're supposed to be the mom, and I'm supposed to be the kid!" Without a doubt, we are supposed to find her to be a deplorable mother. That doesn't change until the last few minutes of the movie where she finally does a mildly selfless thing for him. Really, it's not even sacrificial and barely laudable. So I watched a movie about a woman with whom I am presumably supposed to feel a connection or admiration, but really she was totally hateful and her last minute character development was too little, too late. Terrible movie. One can regret her life's decisions and work hard to have her dreams without screwing with the next generation by being too self-absorbed to show a little kindness and love to a human being in her care.
4 people found this helpful

RhayzzaReviewed in the United States on September 29, 2021
5.0 out of 5 stars
Great Birth Control Flick. Rather, URGE Control.
Verified purchase
What waaaay too many people are missing is the POINT: THIS is what happens when children raise children!!! I cannot believe how many people MISSED that! And yes, it happens to the best of families: It happened to our daughter who was on the pill since she was 12yo for her brutal menses. Things happen.

I think it depicted quite well (without being preachy) that kids raising kids can face a lot more problems than the typical family. It's one thing to be 22yo and trying to raise a child by yourself/with what I call a Forever $5hr Kinda Spouse. That is hard enough. But to worry about school and college on top of it...even going off to the Military can't fix this situation. The key phrase in that entire paragraph is WITHOUT BEING PREACHY.

Nobody wins in that situation, it is super hard without the grandparents (who still love their children and grandchildren but some of us DO believe in You Made Your Bed, You Sleep In It) even helping out. Again, I think this is a flick about birth control. Urge control, absolutely. Moreso, now that I just typed that out.

The bit where she says to the poor kid, "I thought we were a team!" NO MOM...how many households have THIS going on, today? And I'm not particularly strict about these things, but my goodness...my daughter's life would have been so so SO much easier if she either abstained (while on the pill). My granddaughter is just about 18yo now, and we wouldn't have it any other way. She sure learned a lot about what NOT to do in life.

So back to this movie: Yes. She is a GREAT mother CONSIDERING THE SITUATION. Forget age, forget the loser junkie husband...it's a story about disillusion, delusion and recovery from such. We all have been disillusioned in life. We've likely all been delusional (especially about marriage and parenthood): Once we get into that saddle, what we thought was a little toy horse ride with coin change to start it up turned out to be a wild bull on crack.

It's a story about growth. Not just in the last five minutes of the movie but all along, you see everyone learning a little more about life. How she KNEW that little boy was going to blame and hate her for kicking Dad out. How many kids out there know THAT story?? And I hate to break it to everyone, but not every child has a golden childhood. Some kids have to grow up a lot faster and harsher than the little boy in this movie. Her biggest problem was that she was a child having a child. You do not automatically grasp maturity just because your body did a grown up thing. (Seriously, people?)

I like the title, I think that was more about riding in the car with her Dad than the Son.

The more I see Drew Barrymore in movies, the more I like her. She is hilarious.

SamanthaReviewed in the United States on July 16, 2021
4.0 out of 5 stars
Good Acting. Wonderful Cast.
Verified purchase
Riding in Cars with Boys is based on the true story of the author of the book by the same name. Although, reading the synopsis of the book, it seems that the movie took some poetic license with the script and is much more PG and light-hearted but it definitely works well as a movie. I love the structure of a story of the past within the story of the present day. This is a very well-written movie script. The story is about a woman in the 1960's who becomes pregnant in high school and subsequently married and the life circumstances that forestall her dreams of going to college. Admittedly, the plot didn't sound so great to me at first but this movie had great reviews and a wonderful cast and crew so I figured I'd try it out and I'm happy I did. The real plot of this movie is really about relationships specifically between parents and children but also between friends. This movie is very well-written and well-acted. Drew Barrymore, who plays the main character in the film is amazing in this movie and her best friend, Brittany Murphy is equally well-cast. These actresses are truly great in this role and work really well together as friends. Although all the acting here is very well done, in terms of story line, Barrymore's character is flawed and her choices, especially as a parent, are not always likable and sometimes even selfish and yet, she has a redeemable quality I can't put my finger on and maybe that's what makes her so interesting. The redeeming part is probably because the movie is told by her son, Jason, who turns out really well. The other thing I really like about this movie is the costumes and set design as the movie ranges from the 1960's to the 1980's. Definitely suggest seeing it.
2 people found this helpful

joel wingReviewed in the United States on June 19, 2021
4.0 out of 5 stars
Unfulfilled dreams and how it shapes the life of two people
Verified purchase
Riding In Cars With Boys is about unfulfilled dreams. It’s the 1980s and Drew Barrymore is trying to get her memoir published. The movie flashes back and forth between her past and present to explain her story and book. Her early life for example was all about being a writer and boys topped off by getting pregnant as a teenager. As expected that forever changed things for her, but it also goes into how it shaped her son. The story goes from the serious to the comedic and then back again. It really works and there are plenty of laughs but also some messed up moments.
4 people found this helpful

SundayAtDuskReviewed in the United States on August 8, 2021
3.0 out of 5 stars
Riding In Cars With Daddy is Safer . . . .
Verified purchase
This movie was watchable enough, but protagonist Beverly Donofrio showed little emotional growth. The way she shouts at her son towards the end that she was a good mother, a great mother sort of gives away her narcissism. The movie is all about Ms. Donofrio trying to make something out of her life, something besides being a wife and mother who was denied the college education she wanted, due to becoming a wife and mother and marrying an addict. At least the movie was honest about her true feelings, as well as honest about how children of such parents can get so caught up in the drama of it all that they have difficulty breaking free. I liked the ending, too, even though I've never been much of a James Woods fan. He was excellent in an understated way, and the film was also honest about his feelings as the father of a daughter who wanted to grow up too fast.
3 people found this helpful

M. kelleyReviewed in the United States on July 20, 2021
5.0 out of 5 stars
Excellent
Verified purchase
I am 57, but I could relate to being a girl in those days and the entire parents, drugs, college, and making out in cars and OMG if you miss your period. My best friend was 15 when she had her daughter. What I liked was the reality of choices have outcomes. I liked the reality of marrying the wrong guy too young.
If I had a 10 year old girl right now we would be sitting down and watching this with a lot of discussion. For many reasons, the movie and its message kept my attention.
3 people found this helpful

EmilyReviewed in the United States on August 8, 2021
1.0 out of 5 stars
Maybe I just didn't like the story line
Verified purchase
Her father is terrible. No compassion for a 15 year old who gets pregnant and guilts her into marrying the loser of a man who is the father of the child.

So many other reviewers blaming the 15 year old. 15!

I had no compassion for most all of the male characters in this movie... even the kid as a child rats it mother out because he is a brat who holds it against his mom for his father leaving because he is a heroine addict.

I didn't like the ending where she "reconciles" with her dad. She should have told her dad to shove it. The dad ruined her life, not her getting pregnant.
2 people found this helpful

Martha Ann KennedyReviewed in the United States on July 21, 2021
4.0 out of 5 stars
Good film
Verified purchase
the end is schlock but the movie (I haven't read the book and probably never will) is very good. It is refreshing to see a film that's not about a bunch of rich women buying things, who have incredible careers (in NYC, of course), whose biggest problem is that their husband is overseas a lot making $$$$$$$ business deals. Life as I've known it is filled with these things, these people, these situations, all of it. Beautiful and convincingly acted.
2 people found this helpful
See all reviews
Back to top
Get to Know Us
Make Money with Us
Amazon Payment Products
Let Us Help You
EnglishChoose a language for shopping. United StatesChoose a country/region for shopping.
© 1996-2022, Amazon.com, Inc. or its affiliates