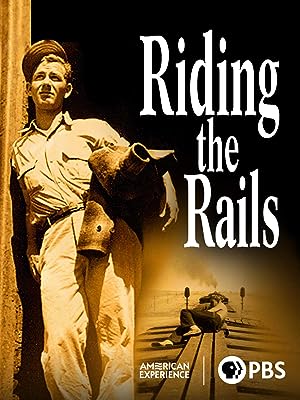 (111)7.61 h 12 min1998
Archival footage and newsreel interviews featuring kids full of bravado tells the unforgettable story of 250,000 teenagers who left their homes and hopped freight trains during the Great Depression.

Watch with PBS Documentaries
Start your subscription
Add to
Watchlist
By ordering or viewing, you agree to our Terms. Sold by Amazon.com Services LLC.
Write review

CalGirl1983Reviewed in the United States on March 28, 2021
5.0 out of 5 starsThis is One of the Best History Lessons You'll Ever Receive
Verified purchase
This film triggered two very unique emotions, - one, from the very thorough and insightful look into a period of history that had lasting and insidious effects on the people impacted by circumstances out of their control. The other, the unfortunate fact that, some 90 years after this "hobo" trend fell largely into obscurity in the public's conscious mind, the exact dilemmas and problems (and ways of dealing with those problems) not only still exist but do so in a wave that is exponentially more dire than the depictions in this documentary. You will not only find tent shelters and homeless encampments today as were common during the Depression, but if you look just a little deeper, you will also be amazed to discover how many college-educated; professional (formerly); upper-middle-class raised citizens of the "richest country in the world" are, as I write this, living in their cars, vans, or if lucky enough, small campers in campgrounds and Walmart parking lots. Today, in 2021. The main difference being, the numbers of people in these situations today are such that it makes the 1930's hobo trend look like a minor blip on the screen of American history, which it was most certainly not. It was a large-scale trend back then, impacting thousands of lives of young kids and their families. What is so sad, unfortunately, is that after all this time, nothing has changed. (At least not for the better).
The documentary itself is a work of art - it shows not only the lives these kids led in vivid detail, through first-hand interviews and actual archival footage, but it also manages to impart, interspersed with the stories of hardship, the undeniable element of the lure of freedom, self-sufficiency, and romanticism that initially drew many into that lifestyle. And while not intending to diminish the problems they faced, you can't discount the part that the romantic element interwoven with actual historical facts played in this trend in the country. The film was made and the interviews conducted at the perfect time, while a number of former rail-riders could still tell their stories. Thank goodness they used real footage and classic still photos, such as those by Dorothea Lange, rather than dramatizations or animated sequences. The musical score is spot-on, - with Woody Guthrie setting the background tone for many of the scenes. Actually, the only thing they could have done differently, IMO, would have been to play at some point in the film, "City of New Orleans", by Arlo Guthrie. That would have been a nice touch of icing on the cake of this beautiful, compassionate and insightful piece of Americana.
Report abuse

cw of the Black HillsReviewed in the United States on January 5, 2014
5.0 out of 5 starsWhy did teenagers become hoboes? For the same reasons
Verified purchase
that adults did. This documentary interviews people from different backgrounds who hoboed in the 1930's while they were still in their teens. It tells of the tough times families were enduring, often causing young people to try to provide for themselves. It seemed as if the elusive jobs were always someplace else and the rails were an accessible means of travel. The story uses original film, not movies or staging. The people involved tell their own stories and emotions, kids who had to become toughened and wary at too early an age. As hard as it was for the white kids, it was even harder and more dangerous to be black and on the rails.

Our father was one of those hoboes then. Maybe that's why this story caught my eye. Dad didn't talk about his experiences. Maybe this film explains some of what he didn't tell.

The story is presented clearly and caught my attention quickly. The stories of every-day people makes history real to me. Politics may make headlines, but people live what politics make.

Dana K. WolcottReviewed in the United States on January 14, 2011
5.0 out of 5 starsPoignant Depiction of Teens During the Depression - Teacher's Perspective
Verified purchase
I stumbled upon this documentary when I was searching for something to show my students of what life was like during the Great Depression. I wasn't disappointed.

"Riding the Rails" is a series of interviews, stock photographs, music, and video of teenagers who, by choice or by force, took to traveling the country via the railroad system. It has really helped my students to understand what life was truly like for teenagers during the 1930s. This documentary is especially helpful when teaching Steinbeck's "Of Mice and Men" because the people interviewed discuss the loneliness of the open road and the effects it had on them. They were always surrounded by people, but everyone kept to him/herself.

What a great way for my students to really see what people who were their age went through at a time that seems to mirror our current times.
3 people found this helpful
Report abuse

BigMac1912Reviewed in the United States on February 27, 2016
5.0 out of 5 starsbut hang on and enjoy the ride
Verified purchase
No pun intended, but hang on and enjoy the ride. What a story, including special features, that supports a middle school and even high school "Great Depression" curriculums. The neat thing for the students is this is an "unforgettable story about 250,000 teenagers who left their homes and hopped freight trains during the Great Depressions." It adds a twist to the saying "stay in school," don't ya know!
5 people found this helpful
Report abuse

Danielle BarryReviewed in the United States on September 3, 2014
5.0 out of 5 starsBeautiful documentary on experience of Depression era adolescent "hobos"
Verified purchase
This lates 1990s documentary explores the phenomenon of teenagers riding the rails during the Great Depression of the 1930s. It includes interviews with elderly individuals who were teenagers on the move during that era, along with archival footage of the Depression era, weaving them together to make a poignant and powerful portrait of a traumatized generation. You really get a sense of the deep sadness and insecurity the Depression planted in these young people, and how their experiences colored the rest of their lives in both positive and negative ways. Although I had often listened to my grandfather's stories of growing up in the Depression and working in the CCC camps, watching this film for the first time 5 years after his death gave me an extra layer of understanding of him and how the Depression haunted him over the decades. I wondered if he'd ever seen it when it first aired and wished he were still around so we could discuss.
4 people found this helpful
Report abuse

Ann MarquezReviewed in the United States on June 7, 2014
5.0 out of 5 starsExcellent Historical Perspective
Verified purchase
First-hand accounts of people who lived through important historical times are invaluable for providing a feel and flavor that mere documents and pictures cannot fully provide. It is true with survivors of the Holocaust, WWII vets, and those experienced the Great Depression. We are losing these folks to the passage of time, but their first hand accounts are well-documented in this video. Viewers follow the stories (pictures and footage included) of several young runaways. We hear of their painful separations from family, friends, and home, to the dangers, fear, and loneliness they faced on the road while hopping trains and hiding from the railroad bulls (not always successfully), to scrapping for food each day as they criss-crossed the country. Their lives were forever changed by these experiences, and viewers get their poignant perspectives as though sitting with them having a conversation. An excellent teaching resource for presenting the Depression and the Dust Bowl, the migration to California, and the vast hopelessness felt by the entire country during these trying times.
3 people found this helpful
Report abuse

Arkansas RedReviewed in the United States on February 6, 2012
5.0 out of 5 starsRiding The Rails DVD
Verified purchase
If anyone ever wondered just how romantic or dangerous it was/is being a hobo and riding the rails this DVD is a must see. This DVD tells it like it is from the mouths of the people who lived this life. From the Great Depression to modern day hoboes there's a wealth of information here. I heartily recommend it to young and old alike. To some it may invoke a sense of sadness and pity, and to others it may stir a wanderlust. Long live the spirit of the hobo. Arkansas Red-Ozark Troubadour, Ozark Mountains, USA
2 people found this helpful
Report abuse

Barry SmithReviewed in the United States on June 2, 2018
5.0 out of 5 starsThought provoking
Verified purchase
This is a must see, what these people went through during the depression and survive is a testament to true will power and determination.
Report abuse
See all reviews
Back to top
Get to Know Us
Make Money with Us
Amazon Payment Products
Let Us Help You
EnglishChoose a language for shopping. United StatesChoose a country/region for shopping.
© 1996-2021, Amazon.com, Inc. or its affiliates