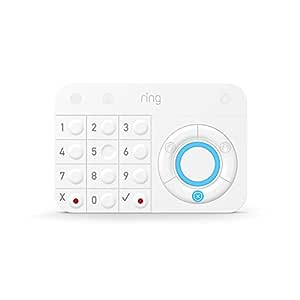 Need help with this device? Visit our Help pages or ask experts on our community forum.

4.7 out of 5 stars
4.7 out of 5
976 customer ratings
How does Amazon calculate star ratings?
Amazon calculates a product’s star ratings based on a machine learned model instead of a raw data average. The model takes into account factors including the age of a rating, whether the ratings are from verified purchasers, and factors that establish reviewer trustworthiness.

Bazza
1.0 out of 5 stars Hardware Design Issues - Product Not Fit For Purpose
Reviewed in the United States on March 19, 2019
Verified Purchase
I have been impressed with the presentation and appeal of the Ring products but the operation falls a long way short of acceptable. The alarm panel is a case in point. No where in the literature does Ring say that you cannot leave the alarm panel plugged in permanently. If you do something happens which causes the alarm keypad to freeze even though the app reports it as being on line. The practical aspect of this issue is that you enter through your home primary door only to find you cannot unset the alarm. You are then scrambling for your phone app to unset the alarm before it activates. Not very helpful for a monitored alarm! Ring’s answer to this issue is that “you left the keypad plugged in for too long!” What a nonsense. If you have to remember to periodically put the keypad on charge in order for it to function as described then the PRODUCT IS NOT FIT FOR PURPOSE. This is a widespread problem among Ring alarm users. Nobody however finds the requirement to unplug the charger and periodically plug the charger back in as being acceptable for a security alarm system. Ring needs to get its act together or stop misleading buyers.
Read more
167 people found this helpful
Helpful
Comment Report abuse

Ryan Longden
4.0 out of 5 stars great addition to the alarm
Reviewed in the United States on September 24, 2018
Verified Purchase
After doing a bunch of research on alarm systems I chose Ring, and I'm glad I did! And here's why. While the alarm system is still very new it has so many ways that it can expand, It has multiple ways to communicate with other smart home devices. Z-wave, Wifi, cellular and I believe Bluetooth. I would imagine it's just a matter of time where Ring will be able to lock all your smart door locks once the system is armed, Or if the smoke alarm goes off unlock all those doors. Another comforting thing for me is the company has been around for a while with its ring doorbells. we have all seen the "Alexa show me the front door" Commercials right? What you might not know is Ring has been purchased by Amazon and is ramping up its product line. ok back to the alarm! I love the instant alerts I get on my phone! I'm talking as soon as the alarm is tripped, armed, or disarmed 'I'm notified within a second at most three. The System uses Z-wave technology to communicate with all its sensors and even comes with a repeater. though I doubt most will even need it. There are only a few things about this alarm that I Don't care for and one of my issues has already been addressed, and Ring is Already coming out with a solution! Ok, The First thing I don't care for is the door chime only sounds from the Ring base and not the keypad. if you have a large home and the base is set up on one side of the house or in a closed room you might not be able to here when a door is opened. The keypad says things like "Home and armed" does its typical countdown beep when you come home to let you know the system is armed u need to disarm it. Another issue I had with the alarm is the actual siren, It's built into the base station and in a large home it sounds a little louder then a smoke detector, they are releasing an additional siren that I plan on adding onto the system once it's available the keypads also sound their own sirens, But I want the neighbors down the block to hear it! ha ha.
Read more
79 people found this helpful
Helpful
Comment Report abuse

Ray
2.0 out of 5 stars Things that I wished I know
Reviewed in the United States on February 5, 2019
Verified Purchase
1. Keypad lockup can occur

We have 4 of keypads. One of the keypad got into a frozen state one day when we return home. The kids were panicking before we disarm using second keypad in the house. The keypad keypad did not respond to any of key presses and no sound when pressed. Unplugging from power cord did not fix issue. After randomly pressing all the button and the right corner button, keypad reset and now back to normal.

This would be a big problem for houses without second keypad.

2. No option to turn off LED lights

When keypad is connected to power source, the battery status and arm status LED is always on and very bright. Guests often ask about the alarm system.

Although keypad have build in speaker, it does not chime when door/window sensor are triggered.

Will Morris
5.0 out of 5 stars Great Keypad, could use some improvements
Reviewed in the United States on October 29, 2018
Verified Purchase
I love the alarm system and I do like the keypad, but it has a couple of issues. One is using a USB mini connector for power. It works for quite a while on batter, but lights don't stay lit to indicate alarm on or off condition when on battery only. Adding power in a permanent install is a pain because of the cable. It's almost impossible to hide it. The other issue is the power light. It is totally unnecessary. System armed or disarmed lights will tell you it has power. The light is extremely bright and green, which adds to confusion as to if the system is armed or disarmed as green usually means disarmed for people not familiar with it. I wound up putting white electrical tape over it to make it disappear.
Read more
58 people found this helpful
Helpful
Comment Report abuse

LVWasHere
5.0 out of 5 stars Another Great Device from Ring!
Reviewed in the United States on September 20, 2018
Verified Purchase
My initial purchase was the Ring Alarm System and we felt we needed a second keypad within the house. After the initial system was installed and configured, adding this second keypad was a no brainer! It took me longer to open the box, than it did to add it to my system, mount it and rename it! It's that easy to do! Don't think twice, if you feel you need a second keypad, order it right away! I can't say enough positives about this Ring Alarm system... highly recommended!
Read more
40 people found this helpful
Helpful
Comment Report abuse
See all reviews from the United States

Darkev
5.0 out of 5 stars Love this keypad
Reviewed in Canada on December 29, 2019
Verified Purchase
I love the Ring alarm system. It’s so easy to install and much less costly than going through an alarm company. Plus no contracts to sign and be locked into. This keypad was purchased for my back door. I needed a way to deactivate the alarm when entering through that door. It’s been connected for several months now with no issues and no battery recharge! I’m surprised that it had not required a recharge yet. I’m very impressed with the entire system and find it more user friendly than the one I had professionally installed years ago. It’s so easy to connect other alarm accessories.
Read more
Helpful
Sending feedback...
Thank you for your feedback.
Sorry, we failed to record your vote. Please try again
Report abuse

Stephen M
5.0 out of 5 stars Super easy to set up
Reviewed in Canada on August 11, 2019
Verified Purchase
Pretty straight forward setup. Follow the instructions to add it to your ring system, and start using it.

It would be nice if it didn't use a micro USB as the power jack, though. A standard barrel jack like the one on the base station would make installation easier for anyone who is installing power cabling in their wall for this.
Read more
Helpful
Sending feedback...
Thank you for your feedback.
Sorry, we failed to record your vote. Please try again
Report abuse

Jack
5.0 out of 5 stars Another keypad in a different entrance of the house with arming status
Reviewed in Canada on September 3, 2019
Verified Purchase
I need this keyboard for a difference entrance of the house. It works well! I like the "ring" design that alerts the user how long do they have to unlock the system before it starts to alert. Highly configurable through the app.
Read more
Helpful
Sending feedback...
Thank you for your feedback.
Sorry, we failed to record your vote. Please try again
Report abuse