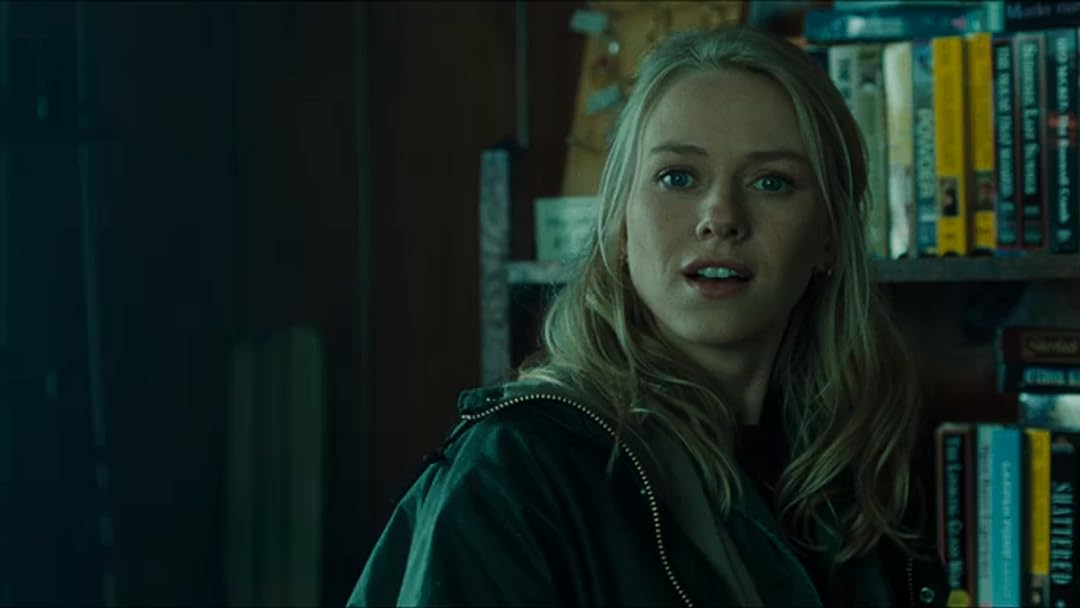 (3,694)
1 h 55 min2002X-RayPG-13
When four teenagers all meet with mysterious deaths exactly one week after watching a videotape, investigative reporter Rachel Keller tracks down the video... and watches it.

ConspirHerSeeReviewed in the United States on November 23, 2019
4.0 out of 5 stars
Nothing more unsettling than pure evil inhabiting a child.
Verified purchase
I like this movie. It would be awesome if they re-release it in 3D. We were late to the theater to see this one and had to sit in those front row seats too close to the screen. ***Spoiler Alert****

So the part where she emerges from the TV scared the bejesus out of me. Had it been in 3D I would have peed my pants i'm sure. I like the whole uniqueness of the story. Hollywood hadn't had an original thought in decades. Well considering this is a remake of a Japanese scary film to begin with.

The movie kept me on the edge of my seat to find out what was Samara's deal. Why did she never sleep, why was she evil, why was she hurting people in life and in death. You never got the answers you were looking for, which I thought would lead to a sequel, Ring II.

People are motivated to do good, for good karma, approval, rewards, acknowledgement to avoid punishment, prison, altercations etc. But what is the motivation to be evil? I guess pure evil doesn't worry about punishment because it does the punishing. Evil doesn't need a reason, evil doesn't play by the rules, and evil doesn't have boundaries.

When you think about pure evil in those terms, if you've ever seen it, or experienced it, or survived it... you know you are dealing with a force to be reckoned with.

DafReviewed in the United States on February 2, 2021
5.0 out of 5 stars
A genre classic
Verified purchase
There's not a lot left to say about 'The Ring' that hasn't already been said except enough time's passed that you can legit call it the millennium's first bona fide horror classic. Adapted from a 1998 Japanese film that's a classic in its own right, 'The Ring' adds stylistic touches of 'The Shining' and 'The Changeling' to produce one of the most successful remakes ever

{ By the way, I'm seeing a lot of comments complaining that the movie's been edited for a PG-13 rating. FYI: this movie was always PG-13, it just scared you so much at the time you assumed it had to be rated R ;) }

I just revisited this streaming on Amazon, and it looks greener than I remember: I recall the film having a bluer tint. I once wrote an entire paper in college comparing 'The Ring's "analog" blue look to 'The Matrix's "digital" green filter so I'm going to feel real silly if it was always just plain green. I've noticed a lot of movies on Prime Video look darker than normal so it could be a product of that; so turn up the brightness a little and maybe cool the picture tint a couple notches if you're a real stickler for the authentic 'The Ring' experience.
6 people found this helpful

Ivan David LippensReviewed in the United States on December 22, 2017
3.0 out of 5 stars
Share this Review with Someone IMMEDIATELY, or you're NEXT! (heh)
Verified purchase
A Quality Production, with a Decent Cast, but a Poor Progression of the Plot.
There are other movies out there that assign super-powers to people who have been victims of horrible deeds.

This film asserts that the victim had some sort of variety of power prior to their tragedy.
There are some twists that help the movie to peak, every so often, but the power scaling becomes so unmanageable that, at some point, its easy to lose interest.

For one, injustice is not a good enough reason to give anybody the power to take life from multiple strangers.
That's what we call a plot-hole, and it's a pretty big one.

When you think about it, this is basically one of those movies that is saying "What If" this unstoppable force existed, and we showed everybody failing to deal with it.
Ooh! Scary Stuff!

Not Really.
"What if" there was a Mustard Bottle in a Diner, and anyone who opened the lid, was doomed to only crave mustard for the rest of their lives.

So, what if a girl with Evil Psycho-Kinetic Powers was pushed down a well by her parents, but not even death could stop her!
Okay, well then what's the point of making a movie about it, if she can't be stopped?

It's an interesting Twilight Zone episode, I'll give you that, but you can't base an entire movie around people failing to unstoppable forces.
That's just Boring, and it's also not based on a Universe where Justice exists, if you can't do anything to counter the malevolent force.

When it comes to that, it's almost like Rape.
Seriously, if you present your viewer with an Evil force that they can't get away from, doesn't that feel like Rape?

You can't base your plot in a Logical Universe, and decide to break the rules whenever you like, just because you think it'll be fun to constantly lead on your audience.
That's Lame.

Anyways, all the QQ aside, it's an entertaining movie, but the ending, as with many movies unfortunately, is also very poor, and disappointing.
Now, I'm going to watch the second Ring movie, so I gotta go! (LoL)

P.S.
A person could last A LOT longer than 7-days in a well.
25 people found this helpful

Michelle A.Reviewed in the United States on April 16, 2020
5.0 out of 5 stars
Still creepy af...how many years later?
Verified purchase
Seen this many times and it’s still good lol. Creeps me out big time!! I can honestly say though...it’s taken me a while to figure out exactly what was going on w/Samara. Smh...I’m a bit slow sometimes lmao. On another note: I’m rethinking my costume for Halloween this year! I think Samara has jumped to my top 3 choices...I can imagine my co-workers faces! Maybe I’ll even make arrangements for someone to call the office...and say the line...:D
7 people found this helpful

Mournblade14Reviewed in the United States on April 23, 2017
5.0 out of 5 stars
5 stars is a tribute to the original, but this version has been cut to PG13...WHY?
Verified purchase
This movie is top notch, no idea how they're going to match it in the remake. One reviewer said the story was all over the place... really? Probably the most cogent plot of any horror movie ever (unless your IQ is less than your shoe size). The Ring: Take a clever horror movie trope; add one of the best crime thrillers ever made; add some genuine horror scenes; add a 'no escape' ending. Excellent! Also, we have the most successful horror device ever in addition "the creepy kid". Now, the crime thriller. This is absolutely amazingly well done & is what takes this movie outside of mere horror. There is sadness, elation, dashed hope, decent into madness, murder, coverup, denial & most surprisingly, pathos. The director takes you through this familiar but brilliant territory, gives you the satisfactory ending... and then flips it on you. All of this is deep but utterly coherent & easy to follow. Utterly entertaining movie & frightening to those who are so inclined. Complaint? This version has the horror scenes cut to get PG13.
17 people found this helpful

Geoffrey F. ArnoldReviewed in the United States on June 9, 2021
1.0 out of 5 stars
What started out with promise ultimately failed to deliver.
Verified purchase
We want a film with a clear plot, one that is not complex for the sake of being complex, but which adds nothing to the story.

This film is the latter, not the former.

Naomi Watts is a great actor, and she did her role well...until she didn't.

You watch a video, and seven days later you die. Pretty straightforward idea.

But in the hands of this producer and director, that wasn't good enough. They had to throw in a whole other element or twelve which made the story so drawn out, so convoluted, that you just begin to lose interest because what should have been straight forward and direct turned into a complete disaster.

We have a light house, a horse farm, a well, a child, nut houses, newspaper records, files, and just a complete mess of a plot that started out with such promise and became a ruin.

Why? Why can't these people just follow the story where it should go and stop interfering with that with so much nonsense that it makes the film unwatchable. I got through two-thirds or so of it before I said, "Enough".

I now don't care how it ends because they took that desire away from me by putting in too much garbage that made the plot disappear, and that it is no longer about anything I care to know, understand or believe.

Done.
One person found this helpful

joel wingReviewed in the United States on February 25, 2020
4.0 out of 5 stars
Great psychological thriller horror movie
Verified purchase
The Ring was an American re-make of a Japanese film of the same name and would lead to three sequels. It is a great psychological horror flick that isn’t predictable or formulaic like most in the genre because of its strong story.

The plot is that if you watch a video, your phone will ring and tell you that you only have 7 days to live. The movie is part psychological thriller, part mystery, part horror. Rachel’s investigation into the death of her niece is the whodunit part as she goes through archives, interviews various people, etc. hoping to find clues to the video tape. The video itself is full of symbolic imagery, some of which materializes itself in the real world. More importantly it wears upon the psyche of those who see it as they realize they’re going to die. The last part is the girl who is at the center of the video and story and what she does to people. That is the horror part.

Director Gore Verbinski looks like he watched a lot of David Fincher films because he has a dark hue throughout the film to give it an almost surreal feel. That’s matched by the images from the video.

Really, this was a very good film. The story was much different from the typical horror film because it included many different elements and had an excellent script. The look of the film was strong as well. It was scary and weird too as Rachel gets closer to the story behind the tape. All together a great watch.
C
2 people found this helpful
See all reviews
Back to top
Get to Know Us
Make Money with Us
Amazon Payment Products
Let Us Help You
EnglishChoose a language for shopping. United StatesChoose a country/region for shopping.
© 1996-2022, Amazon.com, Inc. or its affiliates