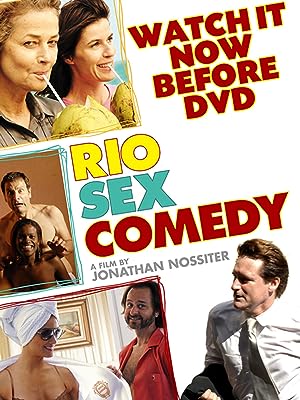 (19)
4.71 h 52 min201118+
Charts the misadventures of expatriates in Rio in their bungled search for both personal pleasures and social justice. Each character reveals a different aspect of the fabled city, from Rio high society to favelas.

Alex HurtadoReviewed in the United States on December 5, 2019
3.0 out of 5 stars
Interesting idea, poorly executed
Verified purchase
Interesting premise, but the lack of energy and focus drags the plot to an unsatisfactory ending. To make a comedy about the cultural paternalism of USA and Europe over underdeveloped countries has a merit on its own, but such an idea deserves a much more crafted narrative talent in order to balance the adequate mix on comedy and social commentary. The cast is very good, and most of them seem to do their best effort to fulfill the premise, however, the result doesn't make them justice. Even the decision to make their characters having their actors actual life names it's uncomfortable and seems exploitative, and leads the think the director wanted to make some kind of fake doccumentary with voyeuristic overtones rather than a reality movie with aesthetic values; perhaps the most accurate metaphor to illustrate this condition is the almost explicit (unsimulated?) sex intercourse performed by Irène Jacob and Jerôme Kircher -who are wife and husband in actual life- that lacks any true chemistry, eroticism, or even excitement, which is a missed point to a movie that promises to be a sex-driven anthropological satire. However, there is some good material in the DVD extras that makes it worthy to see.

AbsalomReviewed in the United States on March 30, 2019
3.0 out of 5 stars
C. Rampling
Verified purchase
Like Charlotte Rampling.

SecretpapeeReviewed in the United States on July 3, 2012
3.0 out of 5 stars
Is that bad?
Verified purchase
Can't really remember the movie, must have passed out from BOREDOM. I don't know if that's a good or bad thing.
2 people found this helpful

dana l.Reviewed in the United States on August 22, 2014
3.0 out of 5 stars
Three Stars
Verified purchase
borning

klulessReviewed in the United States on September 24, 2012
5.0 out of 5 stars
Good comedy
Verified purchase
Great comedy with great characters. Gives you a good insight into the favelas of Rio and the people who live and work in them.

BillybuddReviewed in the United States on December 29, 2014
1.0 out of 5 stars
One Star
Verified purchase
waste of time- never finished it. Good cast bad bad movie

wrongwaytogoReviewed in the United States on January 19, 2016
5.0 out of 5 stars
Five Stars
Verified purchase
Love it

RSC-Production CoReviewed in the United States on November 17, 2011
5.0 out of 5 stars
Director's behind-the-scenes description of the film
(Please ignore the accompanying star rating to this article....this post could not be made without it.
At the film's production, we're not fans of star ratings of any kind)

Exploring the Line between Doc & Narrative
By Jonathan Nossiter, director of the film

I moved to Rio six years ago because I'd wanted for many years to make a film there. The city reminds me of the vital, unpredictable energy of New York in the 70's, with a madcap undercurrent straight out of the screwball comedies of Preston Sturges from the 1930's and 40's. The city made me think of Sturges because he was able to fuse a lightness of tone and a delight in people's misguided intentions together with the most serious issues. In contrast to Frank Capra's sentimentality, Sturges took a hard, biting look at the devastation of Depression era America...and then laughed deliriously (while making us weep without knowing it)!

In Rio, the mad contrast between sensual delight and grave injustices jumps out from every street corner. And there's this feeling that everything is possible there...which foreigners (mistakenly of course) think means everything is permissible. But foreigners' misreadings are not all of their own making.

There's an expression in Brazil which dates from the colonial era: "pra inglês ver", literally "for the English to see," but it actually means something like: "a façade for foreigners to mask a Brazilian truth." Brazilians are very conscious of their image and play with it to both seduce and thwart the expectations of outsiders. The two Brazilian heroines of the film are Iracema, the Veronica Lake-like Amazonian played by delightful newcomer Daniela Dams and Maria Angelica, played by City of God veteran Mary Sheyla as a subtly subversive favela born nanny. Part of what makes Mary Sheyla's performance so powerful is that she herself is the daughter of a nanny and grew up in the favela in which her character comes from. And this mixture of fact and fiction is at the heart of the film.

In fact, I've always mixed fiction and documentary. Resident Alien was technically a documentary but had many staged and fantastical encounters. Sunday is a fiction film laced with real characters, situations and places in Queens, NY. Signs & Wonders is dependent on a tension between Stellan Skarsgard and Charlotte Rampling's illusions and tells the often brutal reality of the streets of Athens. Mondovino, and its epic cast of characters, was imagined like an old fashioned novel. But finally in Rio Sex Comedy I've been able to fully entwine my two passions -documentary and actors in absurdist situations. The always enchanting Irène Jacob for example plays a character obligated as an anthropologist to interview real life nannies and maids for her fictional work in the film. Having actors play her cameraman and her translator allowed for her and her colleagues to improvise fictional moments in direct exchange with the real life nannies being interviewed in circumstances the nannies viewed as authentic but which were always heightened and controlled because of the skill of the actors (including Irène's real life husband, the famous French stage actor Jérôme Kircher, who plays her illicit lover in the film!).

The wonderfully zany and endlessly generous and inventive Bill Pullman is the US ambassador (though everyone on the streets of Rio called out to him as "Meester President" from Independence Day fame) who is thrust into the heart of several favelas and learns, along with the audience, the realities around him from real residents, even as Fisher Stevens -as uproarious in real life as his character Fish in the film- created a second layer of fiction around him. All of legendary Charlotte Rampling's interactions with (the real-life father of plastic surgery) Dr. Ivo Pitanguy and the patients in his clinic are entirely documentary and yet by staying in character she was able to guide them to the limits of fiction. But even the most burlesque scenes, like the NGO presentation of (real-life) English favela hotel owner (Bob Nadkarni), have their roots in his real experiences living in Rio for the last 25 years. So no matter how whacky the comedy gets, it's all firmly rooted in my and other collaborator's long fermenting experience of Rio life.

We shot for four and a half months, mixing scripted and documentary scenes, actors and non-actors, blending into the city and using its population as extras with our small crew even as we staged elaborate and rehearsed set pieces with dollies and steadicam etc...

The actors came several times over three years to Rio to absorb the background for their characters and to forge a relation between their own lives and the realities of their characters' situations. My intention was to apply the freedom of discovery in the gestation and shooting period of a documentary with the discipline and narrative pleasure of a fiction. It took nearly a year and a half to edit the 300 hours down to less than two. This approach was a direct result of the joy I experienced during the shooting and editing of Mondovino and my hope to transpose that experience within the framework of a fiction film.

The actors, as profound creative collaborators and as co-producers of the film, were also responsible for the creation and maintenance of their costumes, hair and makeup and continuity. At one point, Bill Pullman changed into costume behind the trunk of a car while Charlotte Rampling finished ironing her dress in the front of the camera van! The crew was rarely larger than 10 people, led by the deeply talented and responsive Lubo Bakchev, French-Bulgarian DP (of Julie Delpy's 2 Days in Paris and upcoming 2 Days In NY and Abdelatif Kechiche's The Secret & the Grain among other credits). The point was to allow the actors 360 degree awareness and create as committed and concentrated a working group as possible. All this so the fiction could permanently coexist in a tension with the reality of Rio life. Thanks to the actors' generosity and courage I think this is visible in every frame of the film.

The idea from the beginning was to create a kind of workers' joint venture in which in return for sacrificing immediate gain (everyone was paid the same low weekly salary), we would have not just control over our financial destiny as co-owners but we would be able to ensure complete creative freedom in a way that demanded the least possible amount of expenditure (the former always depending on the latter). It was a collective response five years ago when we started planning the film to the oncoming crisis in the film business. We already felt in 2005 that we needed to find new models for film production if we expected there to be new models for film exhibition to counterbalance the death plunge of conventional art house distribution. Even before the current epidemic crash in cinema, the cracks in an untenable system were showing clearly.

By creating intimate working conditions in which even the stars participated on an equal footing with the other crew and production members, we felt this was one possible response among hundreds to how to make films differently. This economic model also mirrored the aesthetic aims of the film. By limiting the costs but working with actors and technicians of the highest level in a truly collective spirit, we could take our carefully honed script and let documentary reality slowly seep inside it in a way that would have been impossible within the context of a conventionally financed 5-8 week shoot.

I was also interested in making a choral film with multiple storylines where there could be deeper connections between the characters' actions than just plot coincidence. The entire film is built on a tension between delirious unpredictability, within scenes and between scenes, and a more subtle governing narrative. By not supplying obvious interconnections, I hope it pushes the spectator to dig deeper into himself to find the resonances. After all why can't we go from ridiculous comedy to slowly simmering drama in the same context in a film when it's almost always that way in life?

12 people found this helpful
See all reviews
Back to top
Get to Know Us
Make Money with Us
Amazon Payment Products
Let Us Help You
EnglishChoose a language for shopping. United StatesChoose a country/region for shopping.
© 1996-2022, Amazon.com, Inc. or its affiliates