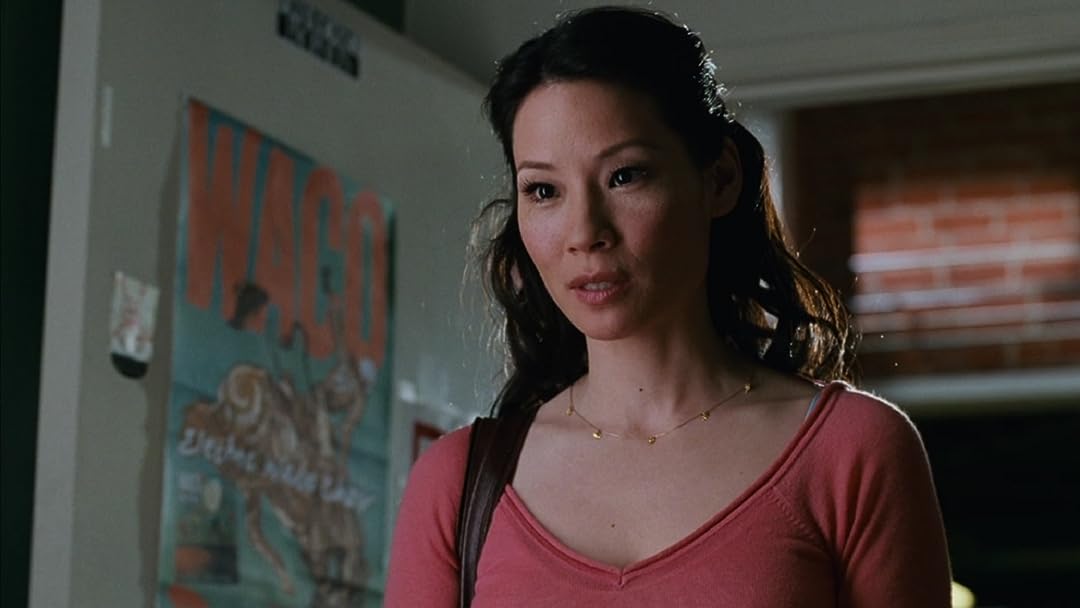 (565)1 h 38 min2007X-RayR
From the producers of THE GRUDGE Franchise comes this terrifying new thriller starring Lucy Liu! A female reporter (Lucy Liu) wakes up in a morgue to find herself a member of the undead. Trying desperately to fight off her thirst, Sadie prowls the dark city streets, armed with a crossbow and hell-bent on slaying the twisted vampires that made her this way. Detective Rawlins (Michael Chiklis) ..

Luna SolielReviewed in the United States on May 9, 2021
5.0 out of 5 stars
Love it!
Verified purchase
Lucy Liu is a favorite of mine, as is Michael Chiklis. I'd seen this movie years ago & watched it a few times before deciding to buy it on DVD so I can watch whenever I want. I'm also a fan of film noir, & this definitely has a noir quality.
Sadie Blake (Lucy Liu) is a reporter writing a series of articles on the Goth party scene. When one of her sources tells her that a friend went to a Goth party and never returned, Sadie decides to investigate. She finds a couple of vampires drinking the young girl's blood, and the body is found the following day.
Unfortunately, Sadie's investigation comes to the attention of the vampires, who decide she must die and she is violently attacked. She wakes up in the morgue.
Sadie decides to use her new vampire abilities to find and destroy the ones who turned her. Her quest is complicated by Clyde Rawlins (played by Michael Chiklis), a detective whose daughter is a victim of the vampires.
The only negative I have is how Sadie experiences pain after being turned. She's dead. She's a vampire. She shouldn't be physically suffering like she does.
That said, however, it's a great movie and I enjoy watching it now and then.

joel wingReviewed in the United States on June 29, 2021
3.0 out of 5 stars
It's like a nightmare for Lucy Liu then she gets an attitude!
Verified purchase
Rise plays out like a nightmare for Lucy Liu. She finds herself amongst a group of vampires and it’s all downhill from there. She goes through a transformation and gets an attitude in the process which is a great turn of events. I really like her when she tells people off. The cast is also strong with Michael Chiklis, Carla Gugino, James D’Arcy, Mako and cameos by Robert Foster, Nick Lachey and Marilyn Manson. Of course there’s lots of gratuitous blood and some gore. It’s a good addition to the vampire genre.
2 people found this helpful

Michael CastReviewed in the United States on May 14, 2016
4.0 out of 5 stars
Oh come on...Give Lucy Liu four stars.
Verified purchase
How many great movies have we seen, that had this beautiful actress in it? At least a half-dozen, right? Miss Liu always brings something special to any movie she plays in. What would Kill Bill have been like without her? Or Charlie's Angels?

Liu is a fantastic co star, playing with some of the reqlly great actresses and actors, Mel Gibson, James Kahn, Jackie Chan, and Owen Wilson. I'm a big fan of hers, and always have been, so I went on and gave her four stars for this low budget film in which she plays the lead. Okay it wasn't a blockbuster, but I think she did her part very well.
In this tale of revenge, Liu plays as a reanimated woman that brings righteous retribution down on the people that murdered her. Waking up in a morgue three days after her demise, she BLASTS her way out of a refrigerated tomb. The sweet and innocent person that she was before her murder is now, long gone. If you've never seen this classic before, I would highly recommend that you do so, I've watched it at least three or four times since it came out in the mid nineties. so, the next time your searching for something decent to stream, give this one a try. I would suggest getting SD, because HD was not perfected yet at the time; it was very expensive to own a device that could play HD, and the budget RISE had to work with did not have the super digital powers that ...well...almost EVERYTHING is shot in now.
So, in a nutshell, Miss Lucy takes a limited situation and does a decent job. Bravo Miss Lucy!! Oh, and if you ever decide that you don't want to be in the Hollywood Hills anymore, I would be most happy, and honored to enlighten you about life in the peace and beauty of the hills of Mammoth Cave Kentucky!
4 people found this helpful

David MyersReviewed in the United States on July 22, 2021
1.0 out of 5 stars
Complete Cheese with no real direction
Verified purchase
This movie had so much potential. However, Vampires that are just normal people that drink blood and live forever and regen fast, and can simply be knocked unconscious with a slap to the head... cant break out of any ropes, handcuffs, etc. In addition, just for fun, the Vampires in this story have no fangs, they have to use regular teeth to tear open flesh to drink OR use a special little cross like blade. Then, instead of drinking the blood which is their life sustenance, they get about a teaspoon of it while they let all the rest of it splash all over the ground, on beds, all down the front of themselves...its no wonder they are so hungry. Its like sitting down and Olive Garden and eating a leaf of lettuce, one noodle, and throwing the rest of your salad all over the place, along with the rest of an entire plate of spaghetti all over the floor. I really expected more from Luci Lu, and I was vastly disappointed. Reading some of these other reviews that gave this a high rating I simply think they want to come across somehow as more intellectually advanced to enjoy such a dumpster fire and try to spin it as being "unique" or "different than all the other Vampire stories". It was different, it was a seriously BAD movie.

William P. MacMonagleReviewed in the United States on November 12, 2020
4.0 out of 5 stars
Morgue Breakout
Verified purchase
I like this film for some reason. I like Vampire movies, but Lucy Liu brings some kind of urgency to the role. That said I have watched both versions of this movie. I liked the disjointed one even though (or because?) the flashbacks kept me trying to figure out the puzzle of her transformation. And there were missing connective tissue (bloody?) things, like who was what and why. The Unrated Undead cut is more serial and fills in the missing parts in the other one. So watch both versions for a more complete story. However, I found the Unrated one not as compelling as the other. It was probably the way the story was told, which makes sense from a director's particular reason for telling the story a particular way.

WALTReviewed in the United States on May 27, 2021
5.0 out of 5 stars
AN ABSOLUTE MUST FOR HORROR AND VAMPIRE FANS
Verified purchase
LUCY LIU DOES, ALONG WITH THE GREAT MICHAEL CHIKLIS, A SUPERB JOB AS A SUBTLE AND NOT SO SUBTLE VAMPIRE. AS SHE
.......TURNS......OTHERS INTO VAMPIRES, THERE IS A SENSE OF CONSCIOUSNESS AND POSSIBLY REGRET. THE DARK NOIR SCENES ARE SUBLIME AND THERE IS BREATHTAKING SUSPENSE BEGINNING IN THE VERY FIRST SCENE, WHEN THE TWO GIRLS GO TO AN
OSTENSIBLE PARTY🦷, WHICH DOES NOT TURN OUT WELL. THE LOCATIONS ARE TERRIFIC AND I ADVISE SEEING THIS IN THE
DAYTIME. YOU DO NOT WANT TO BE BITTEN👦👩. SOME REVIEWS WERE VERY ODD, TRUST MY JUDGEMENT, I NEVER MISLEAD MY READERS. GET OUT THE. 🍿🍕 AND ENJOY.

RonReviewed in the United States on August 2, 2013
4.0 out of 5 stars
"To Be Vampire or Not To Be Vampire"
Verified purchase
This was the second movie that I watched in less than 24hrs. that surprised me with its genre make over. The first was Ginger Snaps with its girl powered werewolf (highly recommend) and now this new twist to the vampire genre.

Blood Hunter for me rises way above the B movie status that its been given for very obvious reasons that separate the two catagories ( budget, writing, acting, direction, cast, locations, props and so on) and in every one of those catagories this movie excels. The acting is very good from Liu (Sadie Blake) to the bit parts played by the lesser known cast members. The directors use of locations, lighting and color schemes combined with his working with his cast to extract good performances is visible in each and every scene in the movie. The dimly luminated scenes add a nice dose of the heebie jeebies and in a few scenes add a bit of eroticism without the scenes being to dark to view.

Lucy Liu's character is not your everyday garden variety of vampire and neither are the vampires that she is after for raping and killing her.They are a different sub species of vampires that don't seem to be able to fly or possess super strengh nor do the have fangs. They are able to survive out of doors in the daylight without dying, but it is uncomfortable and they need to wear sunglasses for eye protection.

After Sadie escapes from a cadaver vault in the LA county morgue she wanders around unsure of what happened to her and what her body is telling her. She is obducted by Auturo (Julio Mechoso) an alchemist who informs her of who and what she has become. This part of the movie reminds me of two movies/tv shows the Karate Kid and Kung Fu where Larusso (Macchio) is instructed by Miyogi (Morita) and in Kung Fu Caine (Carradine) is instructed by Master Po (Luke). Anyway, back to Sadie. I think you get the picture of how Auturo instructs and guides her on her quest for revenge.

Story = 4
Acting =4
Direction = 4
Creepy/Fear Factor =3
Gore =3
Violence =3
Sex/Nudity = Yes/Yes
Foul Language = Yes, but used sparingly.
Entertainment Value = 4+
2 people found this helpful
See all reviews
Back to top
Get to Know Us
Make Money with Us
Amazon Payment Products
Let Us Help You
EnglishChoose a language for shopping. United StatesChoose a country/region for shopping.
© 1996-2021, Amazon.com, Inc. or its affiliates