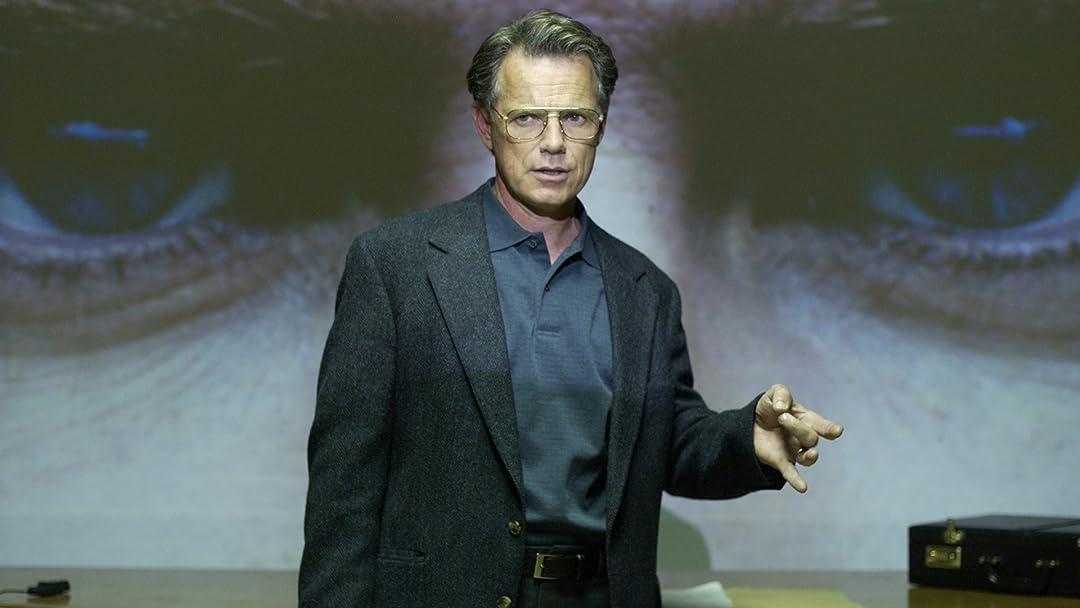 (164)
6.01 h 30 min2004R
A series of interviews are conducted with convicted serial killer Ted Bundy in hopes of gaining insight into the Green River Killer who is terrorizing Seattle.

Amazon CustomerReviewed in the United States on October 5, 2021
5.0 out of 5 stars
Great script and acting
Verified purchase
The movie is based on the book “The Riverman: Ted Bundy and I Hunt for the Green River Killer” by Robert D. Keppel and William J. Birnes. It focuses more on the relationship and interviews with Ted Bundy as he is close to his execution and helps Keppel and his partner get an accurate profile of the Green River killer. Cary Elwes does a great job portraying the complex nature of the most notorious and unusually sophisticated serial killer.
One person found this helpful

SalomeReviewed in the United States on February 20, 2016
5.0 out of 5 stars
Cat and Mouse w/Keppel & Bundy
Verified purchase
Bruce Greenwood does a wonderful job as Robert Keppel in portraying Keppel's dedication and simultaneous angst about his skills as a profiler. The story focus is more on Keppel's interactions w/Ted Bundy as he tries to gain insight into the Green River Killer to fine tune a profile to capture him. While some highlights of the Green River killings are given and a brief spotlight on Ridgway is provided at the very end, that really only frames the more central story of Keppel's efforts to solve the case. So, if you're actually looking for more in-depth coverage on the Green River killer himself and his murders or the complete accounting of the Green River task force and all it when through, then I strongly advise you watch "The Capture of the Green River Killer" w/Tom Cavanagh as Det. Dave Reichert, instead. But if Keppel and the inner workings of profiling and Bundy in his last days on earth are your interest - this film hits spot on.
8 people found this helpful

California DreamingReviewed in the United States on January 29, 2013
4.0 out of 5 stars
Cary Elwes better than Anthony Hopkins?
Verified purchase
(Update August 2014: I actually changed my review of Dr. Keppel's book in which this film was adapted from a 4 to a 5 a while back. It might be the best serial book ever.)

From what I remember, it was Ted Bundy who coined the name "Riverman" for the killer of prostitutes in the Seattle area during the 70s and 80s. I guess the name derived from the fact that the then unknown post-Bundy killer liked to dump his victims in the Green River.

Not a bad name given by not such a good guy, but Cary Elwes is fantastic here as the supposedly nastiest serial killer in US history: Ted Bundy. Sure, there have been those that have killed more people, such as Gary Ridgeway -- the actual Riverman himself -- but few that have killed in such a violent fashion such as Bundy. But while Bundy was indeed bad, Mr. Elwes is not, never devolving into caricature as he seems to invade the true psyche of Bundy in this film. I gave the film "Silence of the Lambs" five stars, but I believe that Mr. Elwes was given more realistic dialog here than Anthony Hopkins in that award-winning film, and this lesser known actor took advantage of it.

I read the book "The Riverman: Ted Bundy and I Hunt for the Green River Killer" quite awhile ago, and I gave it four stars. In reality, I probably should have gone five (I already did as I wrote above) since it is easily the best true crime book that I've read to date, surely better than "Stranger Beside Me" by Ann Rule. Dr. Robert Keppel did an excellent job describing the things that I'm looking for in the genre: what was going on from an historical perspective at the time, what were the motivations of the killer, and how did the detectives catch the perpetrator. Not only that, but Dr. Keppel seems to be not only objective -- after all, he gave even an evil guy such as Bundy some kudos for helping catching Ridgeway -- but Dr. Keppel also seems to not be the "gatekeeper" type; he is willing to share his knowledge with others. Note how Dr. Keppel spent so much of his life in a professor role, as evidence.

A very good movie that was adapted from an excellent book. A pretty big recommendation by me.

Charles L.Reviewed in the United States on January 23, 2016
3.0 out of 5 stars
the Riverman: Ted Bundy and the Green River Killer
Verified purchase
The movie, The Riverman, is based on a book, “The Riverman: Ted Bundy and I hunt for the Green River Killer,” by Robert D. Keppel, Ph.D. As the movie begins, a young woman’s body is found in the shallows of the Green River near Seattle. The young detective assigned to the case decides to enlist the help of criminal psychologist Keppel, who was very much involved in the manhunt for serial killer Ted Bundy. After Kepple is signed on to the GR case, he decides to go to Florida to “pick the brain” of Bundy, who is on death row there. Koppel believed that Bundy could provide insight into the mind of a serial killer. Bundy agrees to discuss the GR case with the detective and Keppel, and it soon becomes obvious that Bundy’s motivation for doing so is that (a) he is bored, and (b) he will try to milk the situation for his own benefit.

The movie proceeds in a conversational tone between Keppel and Bundy, with flashbacks showing how Bundy proceeded to lure unsuspecting women into his web and subsequently murdered. The movie produces more information about Bundy than the GR murderer, and the movie ends with Bundy still on death row, and the GR murders unsolved. I watched the movie on Amazon Prime a few days ago, and when I was asked to provide a review, I had to refresh my memory as to what it was about.
One person found this helpful

Just a Guy Who Likes Good MoviesReviewed in the United States on September 14, 2021
2.0 out of 5 stars
Good Acting. Bad Movie
Verified purchase
I watched this because I like Greenwood and Elwes. I wanted to see how well Elwes could do Ted Bundy. I was impressed. But. I have to ask; what could a guy in a prison cell in Florida tell you about murders being committed in Seattle? I liked the acting. The script was good. But. The editing was awful. The camera work, which I guess was going for a documentary feel, was terrible. There is no feeling of suspense either. Simply put it was good acting in a poor movie.

Loretta NatowitzReviewed in the United States on April 20, 2016
4.0 out of 5 stars
Cary Elwes Is Fantastic In His Portrayal Of Ted Bundy!
Verified purchase
This movie is based on a true story about how Ted Bundy helped to capture the Green River Killer in exchange for a lighter sentence and trying to avoid getting the death penalty. This movie belongs to Cary Elwes who plays Ted Bundy. He plays the part in a cunning, calculating, chilling way. It gives you some insight into the how the mind of a serial killer works and also shows how many of these "killers" have mental issues that develop from things that happen to them way back in childhood. In no way does this give them a excuse for what they do, but proves that metal illness is a real issue that involves a awful lot of people and the proper steps are not being taken to help the mentally ill. I would recommend this movie especially if you are a fan of true crime.
3 people found this helpful

medinasReviewed in the United States on July 3, 2013
5.0 out of 5 stars
AN UNSOLICITED LOOK INTO REAL TERROR!!!!!!!
Verified purchase
The difference between this film and other horror entries, is that this actually happened. That is always the deal breaker for me. There is a world of difference between this and, say, Evil Dead. While the latter may be "an edge of the seat, nail biting fun ride" The Riverman bears grim witness to stark heart breaking reality - NOT A FUN RIDE - With that being said this is a great movie! Ted Bundy virtually came back to life as portrayed by Cary Elwes and it was stunning as well as soul numbing to watch. What a gifted actor! This movie also depicts the terrible toll it takes on everyone (even a tortured but very sick Ted Bundy) involved in crimes of this magnitude. Unfortunately, crimes of this nature show no sign of decline with one virtually in the headlines every other day. An uneasy glimpse into sheer terror and ultimately, tragedy.
7 people found this helpful

Art GremlinReviewed in the United States on May 29, 2015
3.0 out of 5 stars
Honest movie about a bad person, but technically flawed.
Verified purchase
OK. Honest movie with solid performances, but it lost itself a bit and deviates a lot from the horrible killer in the tittles "riverman" itself, and goes to a complete different approach to only give some rushed closure at the end. Bruce Greenwood was amazing in his role. What was really bad for me was the overall technical execution of the movie, camera angles, light, night shots all those aspects where not very well visually executed and feels very amateur, but not in a way that will make you go away from the movie. It's a nice movie about a bad person.
3 people found this helpful
See all reviews
Back to top
Get to Know Us
Make Money with Us
Amazon Payment Products
Let Us Help You
EnglishChoose a language for shopping. United StatesChoose a country/region for shopping.
© 1996-2021, Amazon.com, Inc. or its affiliates