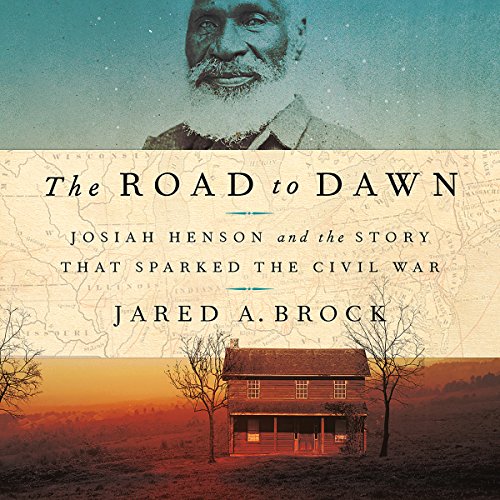 The Road to Dawn: Josiah Henson and the Story That Sparked the Civil War

Jared A. Brock (Author), Ryan Vincent Anderson (Narrator), PublicAffairs (Publisher) & 0 more
4.6 out of 5 stars 164 ratings
See all formats and editions
Sorry, there was a problem loading this page. Try again.

A major literary moment: after being lost to history for more than a century, The Road to Dawn uncovers the incredible story of the real-life slave who inspired Uncle Tom's Cabin.

But before all this, Josiah Henson was brutally enslaved for more than 40 years.

Author-filmmaker Jared A. Brock retraces Henson's 3,000-plus mile journey from slavery to freedom and re-introduces the world to a forgotten figure of the Civil War era, along with his accompanying documentary narrated by Hollywood actor Danny Glover.

The Road to Dawn is a ground-breaking biography lauded by leaders at the NAACP, the Smithsonian, senators, authors, professors, the president of Mauritius, and the 21st prime minister of Canada, and will no doubt restore a hero of the abolitionist movement to his rightful place in history.

Enjoy a free audiobook + more
Learn more about Membership
List Price: $29.65
You Save: $3.71 (13%)
By completing your purchase, you agree to Audible’s Conditions Of Use
Sold and delivered by Audible, an Amazon company
Share

4.6 out of 5 stars
4.6 out of 5
164 global ratings
How are ratings calculated?
To calculate the overall star rating and percentage breakdown by star, we don’t use a simple average. Instead, our system considers things like how recent a review is and if the reviewer bought the item on Amazon. It also analyzes reviews to verify trustworthiness.

Jacqueline
5.0 out of 5 stars Deeply researched. Well written. A page turner.
Reviewed in the United States on July 4, 2018
Verified Purchase
A must-read for anyone interested in American History. A well-researched, well-written, high readable work. When Brock learned that that Harriet Beecher Stowe based Uncle Tom’s cabin on the real experiences of a real person, he researched. And researched. And researched. What he delivers is a well-written history of slavery and its role in our Civil War. In telling Josiah’s story, he expertly weaves in the history of slavery in the US and around the world. By simply telling an honest story, Brock also debunks myths without fanfare or histrionics: the story of slavery is not one sided. Many Southerners resisted it. Many Northeners aided it. Some blacks owned slaves. Some blacks assisted on the Freedom Road. Josiah’s story is extraordinary because he also gained influence with American Presidents and British Monarchs. I noted a reference to Andrew Jackson who has been vilified in 2017-2018: Brock found that Jackson hated slavery and bought a total of 2 - at their pleading because he was known as a fair, compassionate man. He trained them with employable skills and set them free within 2 years. Brock tell Josiah’s story by sticking to facts. Brock ends The Road To Dawn by addressing the issue of slavery today. A must read.
Read more
8 people found this helpful
Helpful
Report abuse

T. English
3.0 out of 5 stars Needs edit for a fact correction
Reviewed in the United States on August 19, 2020
Verified Purchase
While I enjoyed the research the author did to highlight the influential Josiah Henson, the book suffers from the author not having read the entirety of Stowe’s “Uncle Tom’s Cabin.” Brock says “Tom murdered his overseer” on page 177. Stowe’s Uncle Tom does not commit murder in her novel! I was surprised when I read this in Brock’s book. He either never read the novel or he did such a quick read that he misunderstood the plot and Uncle Tom’s character. Either way, Mr. Brock needs to revise his book. I’m wondering if the book was published without the benefit of an editor who actually read “Uncle Tom’s Cabin,” mentioned so frequently in this text.
Read more

3.0 out of 5 stars Needs edit for a fact correction
By T. English on August 19, 2020
While I enjoyed the research the author did to highlight the influential Josiah Henson, the book suffers from the author not having read the entirety of Stowe’s “Uncle Tom’s Cabin.” Brock says “Tom murdered his overseer” on page 177. Stowe’s Uncle Tom does not commit murder in her novel! I was surprised when I read this in Brock’s book. He either never read the novel or he did such a quick read that he misunderstood the plot and Uncle Tom’s character. Either way, Mr. Brock needs to revise his book. I’m wondering if the book was published without the benefit of an editor who actually read “Uncle Tom’s Cabin,” mentioned so frequently in this text.
Images in this review

JLE
5.0 out of 5 stars Eye opening account of an important part of American history.
Reviewed in the United States on August 25, 2018
Verified Purchase
Loved this book. I would have never known about the book, but have a friend who is a descendant of Mr. Henson. Love American history and this book shares about the life of Josiah and his struggles. He was a man who loved God and followed His commandments. This is a book and story that all should read.
Read more
2 people found this helpful
Helpful
Report abuse

Halbert Thomas
4.0 out of 5 stars An escaped slave's 50 year promise to use his freedom well.
Reviewed in the United States on May 27, 2018
Verified Purchase
The Road to Dawn provides important information about the dynamics of the master-slave relationship as well as the harms of slavery to both. It also delineates the many obstacles to recovery from those harms and to reconciliation between the abuser and the abused. The damage of slavery and racial chauvinism may be emotionally difficult to absorb but shed useful light on the still-long road to recovery from the social disease of racism.
Read more
4 people found this helpful
Helpful
Report abuse

Dr. Bob Stouffer
5.0 out of 5 stars A Great Book for Any Month — And ESPECIALLY February — African-American History Month!
Reviewed in the United States on January 25, 2020
Verified Purchase
I attended northern K-12 schools in the 1960s and 1970s. I am Caucasian. I attended predominantly white educational institutions. Few African-American students attended my schools, including my B.S., M.A., and Ph.D. Degrees. Our textbooks were largely absent of contributions and history of African-Americans in the U.S. This book really opened my eyes, educating me about one man — Josiah Henson — who made remarkable contributions in the U.S.A.
Read more
Helpful
Report abuse

Michael Eugene Mosier
5.0 out of 5 stars Informative and Inspiring
Reviewed in the United States on August 30, 2018
Verified Purchase
The Road to Dawn tells the story of Josiah Henson, on whose life was based the story of Uncle Tom's Cabin by Harriet Beecher Stowe. This book gave me a new appreciation of the horrors of slavery. Josiah Henson was truly a remarkable man whose life has brought much inspiration to my own. It was a terrific read. I highly recommend it.
Read more
One person found this helpful
Helpful
Report abuse

Martha J. Pavidis
5.0 out of 5 stars True, beautiful and disgraceful
Reviewed in the United States on April 12, 2019
Verified Purchase
This is a story about a wonderful man, who even though he was a slave, saw many loved ones mistreated, he would not change the standards with which he lived by. Following the account of his life shows the true horrors of what happened to slaves and what they had to do in order to pursue a life a dignity while continuing to help others along the way.
Read more
Helpful
Report abuse

Pamela J. Snyder
5.0 out of 5 stars This book is very informative into the lives of the slaves.
Reviewed in the United States on February 20, 2019
Verified Purchase
I feel that the book was a great educational tool as I do not remember reading "Uncle Tom's Cabin" growing up. The book goes into great detail of the horrible conditions that slaves had to deal with on a daily basis, but also was encouraged by all the 'miraculous' interventions that finally led his family to freedom. The only disagreement I have is with some of the author's conclusions of what must still be done as far as reparations go. But that is a debate for another time. Overall I would highly recommend reading this book.
Read more
Helpful
Report abuse
See all reviews

Sally
5.0 out of 5 stars Jared Brock outstanding
Reviewed in the United Kingdom on June 15, 2018
Verified Purchase
What a brilliant read couldn’t put it down.
Read more
Report abuse

Terra Brown
5.0 out of 5 stars Page Turner from Start to Finish
Reviewed in Canada on May 22, 2018
Verified Purchase
Incredible story of a remarkable man. Its hard to believe I was educated through 12 years of public school, 4 years of undergraduate studies and 3 years of post graduate studies here in Canada and yet had never heard this story.
Unacceptable really.
This book should become required reading for all Canadian high school students.

Well done Mr. Brock on a very well written and captivating delivery of the details of this man's life. I enjoyed every page.

kristi Gordon
5.0 out of 5 stars Couldn’t put it down
Reviewed in Canada on September 6, 2018
Verified Purchase
Great book
Read more
Report abuse
See all reviews
Back to top
Get to Know Us
Make Money with Us
Amazon Payment Products
Let Us Help You
EnglishChoose a language for shopping. United StatesChoose a country/region for shopping.
© 1996-2022, Amazon.com, Inc. or its affiliates