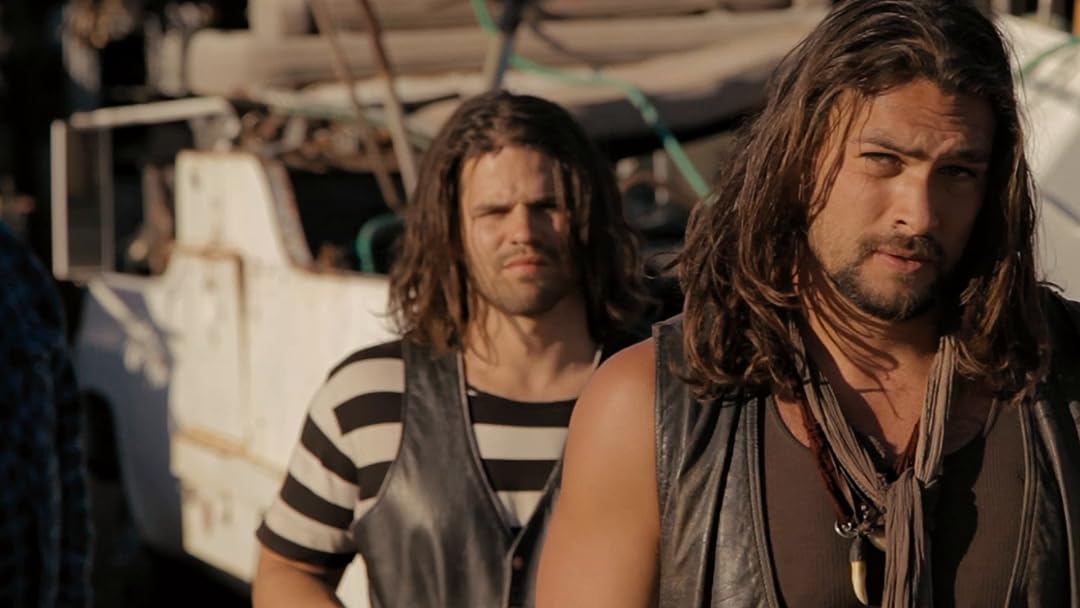 (1,834)
6.11 h 30 min2014R
Jason Momoa's directorial debut. A pair of outlaw bikers with violent pasts attempt to outrun the FBI across the American west in this sprawling redemption thriller.

Leaves MovieSphere in 9 daysRentals include 30 days to start watching this video and 48 hours to finish once started.

R-WReviewed in the United States on February 8, 2018
5.0 out of 5 stars
If Conan the Barbarian, Declan Harp, or any other Momoa-type character had to try & make their way in this world today .....
Verified purchase
This picture has been sorely under-rated at the very least. For an independent first shot at writing & directing from an actor who does nearly all action work, I just can't find all that many flaws. It is shot beautifully, the acting is superb, and the story sticks in your craw for a while after it has ended; ...say any of that about 99&3/4% of what'll be put out and will make fortunes this year. This is not a bloody revenge tale, as borne out by the choice to explain but never depict the killing that put Robert Wolf on the run, but rather a quiet, thoughtful, & deeply felt portrait of a natural outsider forlornly trying to navigate through a world he can never play a part in or even clearly understand. Jason Momoa plays a lot of these tribal/barbarian-type characters (Declan Harp, the Cimmerian, Khal Drogo, etc), who live in the distant past or in some completely fictional world where a good weapon and the inclination, heart, skill, & muscle to use it will serve them well. These characters are not savages, they just value love, loyalty, courage, justice, & above all freedom, while feeling no obligation to submit to someone else's misbegotten laws, in a place and time where what a man can or can't do for himself and his own people is all that really matters. A line from Conan, "Barbarians may be warriors, but they do not sacrifice their children or enslave their allies, like the priests & princes of the civilized world," comes to mind. In other words, none of them had ever been counted among the weak & fearful populace of 20th or 21st century earth. I'm quite sure it was never considered or intended during this film's development or production, but all the way through I kept feeling that Wolf was deep down of a kind with those other Momoa characters, say Harp or the Dothraki, & that he is living what they would all find for themselves if they were to be pulled out of their own lands & lives, & plunked down into 2014 America. They wouldn't be out-matched for a second, just out-lawed, all alone & vastly outnumbered, and so, sadly lost.
25 people found this helpful

Green DancerReviewed in the United States on September 15, 2020
5.0 out of 5 stars
Society has become too civilized. Especially for the predators.
Verified purchase
When we moved from hunter-gatherer into settlements, laws were enacted to that we could live together in peace.
Those initial laws were common sense, and meant to keep our loved ones safe and fed.
Over time, we've become more 'civilized' and the spirit of the law doesn't matter as much as the letter of the law, and I believe we are lesser humans for that happening.
The people who need to be reined in aren't.

This movie started out slow, but only because I'm used to the flash and bang short attention span movie making.
Once I slowed down to it's pace, this became a tale that could be told by any bard, preferably around a campfire.
It really hammers home the meaning of family.
It's a tale of Love.

A hidden gem, lost in the big budgets, just like Wolf.
Now that it's over, I find myself angry, and in tears, at the injustice.
And I think I'll watch it again.

Cassiopeia N MyrkleReviewed in the United States on April 29, 2021
2.0 out of 5 stars
The concept is good but the film is boring
Verified purchase
This movie is very slow. I had a hard time getting into it. While the story behind the events in the movie is something the world should be told about, the way it was told in this movie was hard to watch. No real action and I didn't really get much suspense from it either. The movie spent most of the time watching Jason Momoa on a motorcycle. I felt like I was watching so kind of bike advertisement. The scenery was beautiful but didn't really add to the story. I watch a lot of off the wall movies but this movie was a waste of my money and time. The movie Wind River does a better job at telling the truth about how people have and still are treating the Indians on the reservations. I understand that this was Jason Momoa's first attempt at directing and I hope the next story he does it much better.

FloridayogiReviewed in the United States on August 5, 2019
5.0 out of 5 stars
The most underrated film ever made
Verified purchase
The trailer does not represent the magnificence of this movie. People racist against Natives seem to be be the one's giving poor reviews. This is real Native lives today. Loving, playful, warrioresque and tragic. There is one of the best bare knuckle fights I have seen. Lisa Bonet is enchanting. Momoa is rooted and lighthearted. It is a little slow as the backstory unfolds but that is perfectly done to showcase the personal integrity of the main character. It was done in a way that was still uplifting even though reservation life is difficult. A well thought out script and directing. I do not know if I want a motorcycle or airstream first after this inspiration.
2 people found this helpful

ecarReviewed in the United States on November 29, 2021
5.0 out of 5 stars
Fantastic Film
Verified purchase
I just watched this for the first time and I am sorry I waited so long. I love a story that builds and shows who characters are along the way. The pace is perfect, and we are shown as much as we are told so that by the end you know exactly why it plays out the way it does with no exposition needed. It is also visually stunning from start to finish. It is well cast, and all of the character interactions, even those not pivotal to the story, feel genuine. I rarely re-watch films but definitely plan to keep this one on my list.

Mary M. DallasReviewed in the United States on September 16, 2021
5.0 out of 5 stars
Must watch. True events. Excellent movie.
Verified purchase
This movie was amazing! Based on true events and told with honesty, humor and gut wrenching sadness. The acting was off the chain and they captured the souls of each character. A story that needed to be told. Thank you for shining a spot light on the horrific injustices that tribal communities have to face. On the lighter side, I think I can probably put up a barbed wire fence now!
One person found this helpful
See all reviews
Back to top
Get to Know Us
Make Money with Us
Amazon Payment Products
Let Us Help You
EnglishChoose a language for shopping. United StatesChoose a country/region for shopping.
© 1996-2022, Amazon.com, Inc. or its affiliates