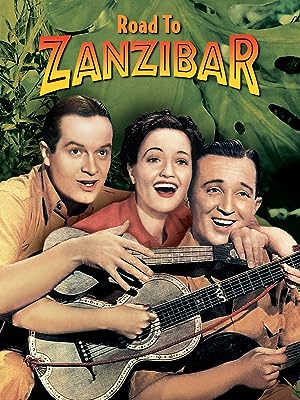 (171)
6.81 h 31 min1941ALL
Bob Hope, Bing Crosby and Dorothy Lamour once again hit the Road to comedy, and this time the boys are in hot water as guests of honor at a cannibal feast in the darkest heart of Africa.

Bobby UnderwoodReviewed in the United States on April 29, 2005
5.0 out of 5 stars
"He Musta' Seen the Picture!"
Verified purchase
Bing and Bob's second outing is about as much fun as you can have at the movies. Bing's "Rhythm on the River" director of the previous year, Victor Schertzinger, allowed the boys to ad-lib so much screenwriters Don Hartman and Frank Butler must have been frantically turning pages trying to see where that line came from! The end result of Bing and Bob's great chemistry was a delightfully funny film with a couple of nice songs and a formula that lovely Dorothy Lamour and the boys would make legendary.

The film has a hilarious opening as Fearless Frazier (Bob) is about to be shot out of a cannon at a carnival by his pal Chuck (Bing). When things go south and the carnival burns to the ground, they take the show on the road. Chuck always has the ideas, as usual, which have "Fearless" doing everything from wrestling an octopus to becoming the human bat. One of Chuck's greatest ideas is to put Fearless in a lead coffin and submerge it in water. As for how Fearless is to escape, well Chuck hasn't quite worked out all the details yet!

And so it goes. There is some usual nonsense about a diamond mine the boys get hoodwinked into buying and in turn snooker someone else into buying, but it's only an excuse for the boys to end up in darkest Africa with the gorgeous Lamour. Donna Latour (Lamour) and her pal Julia (Una Merkel) are running a con pretending to be captured by slave traders when Julia discovers all that dough Chuck and Hubert (Fearless!) made off their diamond mine map and the girls decide to take them on safari, and take them for a ride!

Lamour is sexy and mischievous in her knee high socks and gorgeous hats but begins to worry her pal Julia when she starts to fall for one of the boys. Fearless thinks it's him, of course, when she gets his motor going singing "You're Dangerous" on a moonlit night. But the audience knows it's Chuck, even if there is a complication involving the rich guy named J. Theodore Bradley she's suppose to marry.

Some of the best moments come when the boys get lost and discover some drums in an old cave and begin to have fun. You can guess the rest! Will the boys be supper for the natives in the interior of darkest Africa? Will Lamour go with her heart and go for Chuck? It's certainly fun finding out as Bing and Bob throw the script out the window, filling Zanzibar with their easygoing charm and funny one-liners.

Dorothy Lamour is really pretty here and was the perfect choice to partner with the boys. They just seem like they belong together, both then and now. Victor Young does the music score and Bing gets to sing to Lamour while they're rowing on the river. Watching this one is a fun way to remeber Bing and Bob, who are no longer with us. But as long as great films like this one are available, their memories will remain forever.

subarufanReviewed in the United States on January 16, 2020
5.0 out of 5 stars
Goofy Classic Film
Verified purchase
Bing and Bob zing the viewers with this madcap adventure

Dayna A. FerroReviewed in the United States on June 6, 2020
5.0 out of 5 stars
One of many favorites
Verified purchase
I bought all the Road pictures and I love everyone of them. I grew up watching these on TV and now I own all of the DVDs. When I need a good laugh I put these on.

Antoinette M.Reviewed in the United States on January 14, 2021
5.0 out of 5 stars
Another one for my movie collection
Verified purchase
Love the road movies. Now I have 4
One person found this helpful

MoeReviewed in the United States on January 9, 2020
5.0 out of 5 stars
Great movie
Verified purchase
Fan favorite

christopher landryReviewed in the United States on October 9, 2019
5.0 out of 5 stars
Its bob and bing
Verified purchase
Great movie

Steve O'RandoReviewed in the United States on October 6, 2021
3.0 out of 5 stars
Hi
Verified purchase
Hi
See all reviews
Back to top
Get to Know Us
Make Money with Us
Amazon Payment Products
Let Us Help You
EnglishChoose a language for shopping. United StatesChoose a country/region for shopping.
© 1996-2021, Amazon.com, Inc. or its affiliates