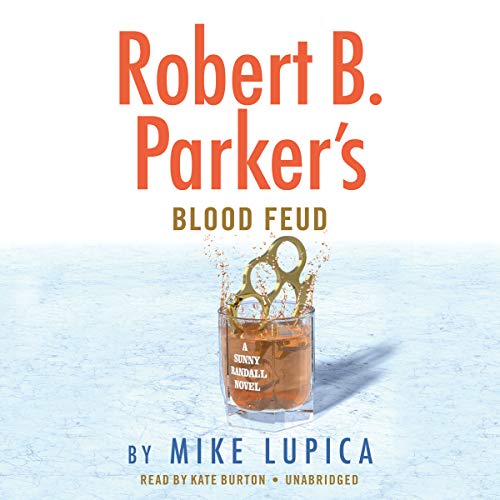 List Price: $24.50
You Save: $3.51 (14%)
By completing your purchase, you agree to Audible’s Conditions Of Use
Sold and delivered by Audible, an Amazon company
Share

4.3 out of 5 stars
4.3 out of 5
584 global ratings
How are ratings calculated?
To calculate the overall star rating and percentage breakdown by star, we don’t use a simple average. Instead, our system considers things like how recent a review is and if the reviewer bought the item on Amazon. It also analyzes reviews to verify trustworthiness.
Top reviews

Kindle Good Customer
2.0 out of 5 stars Full of Liberal Politics
Reviewed in the United States on November 27, 2018
Verified Purchase
While the latest story of Sunny Randall was well written, it contains numerous examples of Lupica's person political views, as when he has Sunny saying: "I felt whiter than the Republican national convention." There are numerous other examples for his anti-conservative bent. Robert Parker never did that. He was not political in his writing, although he was clearly for racial equality. I found that these unnecessary political digs unnecessary and polluted the character of Sunny Randall, so wonderfully created by Parker. I won't be reading any more of Mr. Lupica.
Read more
71 people found this helpful
Helpful
Report abuse

Further North
2.0 out of 5 stars Characters ring true, story is good, put political posturing and anti-gun nonsense ruin the effect.
Reviewed in the United States on December 1, 2018
Verified Purchase
Lupica does as good a job as any of the authors who have picked up Parker's torches to continue his various series, and I'd expect him to get better with time. Sunny Randall is the last of the Parker series to get continued, and I enjoyed the effort, with two significant exceptions.

He sets the mood pretty close to what Parker would have, and (as far as I can recall) says faithful to the characters.

Is the story predictable? Sure...to a point...but isn't that what we loved about Parker's series? To revisit "old friends" doing what they do in familiar contexts? That's why I read series. Other folks' mileage may vary, but if they went into this book expecting something ground breaking...they were just about guaranteed to be disappointed.

About now, you're likely to be wondering, "Why only two stars?" I'll share that it was very nearly one star.

Here's why: The fairly constant barrage of political commentary is not only distracting, it will end up dating the work. I don't read fiction to find out what the author's political stance is; I am less interested in what that is than he is about mine. If I want that garbage, I'll read the news, or browse on-line editorials...there's plenty of that junk out there, but sure as heck don't expect it...or want it...in a story I am reading for fun and relaxation.

Similarly, the anti-gun drumbeat of this book is distracting and nearly caused me to set the book aside. Again, there's plenty of that junk (both sides of it) in the media and floating around the internet; I am disappointed to find it in a work of fiction that I read for entertainment. The lecture by retired ATF agent Charlie Whitaker that intrudes into the story starting on page 141 is not only distracting and hypocritical, it is completely unnecessary to advance the story. I can only assume this junk is in the book because it lets the author beat his particular agenda-drum, gives him a captive audience to virtue signal and apparently makes him feel good.

That's pathetic, and as I mentioned, nearly had me set the book aside.

I'm ambivalent about the issue, which is why I don't want, or need it shoved in my face when I grab a book to relax, escape and disengage from the daily grind of this tragedy and that agenda. Encountering this type of garbage in a fiction book is just sad. As with the political commentary, if I want that nonsense, and want to have my face shoved into others' opinions. I'll seek it out.

If Lupica wants to beat his drums, he should pollute one of his columns with it. I don't want to read it, and I particularly do not want to read it in a work of fiction I've paid for. If I want a lecture, I can find one about anywhere.

Will I buy another book by this author? Right now, no. That may moderate over time, but I promise that if I buy another and it is polluted with the same nonsense, that will be my last. I will also do my level best to make sure everyone I can influence understands why. Politics and social agendas have no place in this kind of fiction and if Lupica doesn't understand his audience enough to get that...he's swimming in the wrong pool. Robert Parker never wrote this kid of nonsense into his books, and for good reason. Lupica should write that down someplace, memorize it and live by it.
Read more
58 people found this helpful
Helpful
Report abuse

N. Schriber
1.0 out of 5 stars Loved the original Sunny Randall series, but no more!
Reviewed in the United States on December 5, 2018
Verified Purchase
This author was a poor choice to continue the Sunny Randall series. Viewpoints showed his liberal politics all over. Also, very obvious this wasn’t written with a woman’s viewpoint. The plot was flimsy. I am sorry I bought this book and I certainly would not buy another in this series. I am so disappointed.
Read more
40 people found this helpful
Helpful
Report abuse

Brian Smith
3.0 out of 5 stars Plodding, with the author's personal politics showing
Reviewed in the United States on December 3, 2018
Verified Purchase
Sunny Randall has always been a female Spenser, and that's been her attraction. But Blood Feud's plot line seems to stretch on and on before tidying up somewhat neatly, while sprinkled with comments from the inner social justice warrior in author Lupica. Robert B. Parker kept his personal politics in check throughout the books he wrote, but as is the vogue today, Lupica could not resist taking several cheap pot shot comments at the 45th POTUS. Through Sunny Lupica also lets the reader know that he "hates guns that shoot fast and kill schoolchildren." I hate authors who can't separate their real-life political views from their fiction. I turn to their fiction to escape reality; authors like Lupica can't let me enjoy their fiction by including doses of their view of reality. Now I'm done with Sunny Randall.
Read more
35 people found this helpful
Helpful
Report abuse

avanabs
2.0 out of 5 stars Definitely won't be continuing to read what was a favorite series.
Reviewed in the United States on November 29, 2018
Verified Purchase
I have been a Robert Parker fan for many years and have read (and re-read) everything he ever published. This isn't a Robert Parker novel!!! While the characters have the same names, their behavior and language (lots of profanity and sexual references) are not at Robert Parker's style.

Might be a good book if you like that sort of thing, but I bought what I expected to be a reasonably close approximation of a Robert Parker Sunny Randall novel. This was not even close.

Some writers, who either pick up a series when the original author dies or ghost write a portion of a series, are able to closely match the original/primary author's style. Mr. Lupica doesn't seem to have that skill, or just doesn't care.
Read more
32 people found this helpful
Helpful
Report abuse

Neal M.
1.0 out of 5 stars My Last Lupica
Reviewed in the United States on December 3, 2018
Verified Purchase
Don't think he really has the skill to write Sunny-or probably any strong woman. And, all I want when I read a Parker is mindless diversion and a great read. But Lupica just can't keep his ridiculous political bias out of the story. Every political quote is odd, not funny and out of place. Parker should have picked better friends.
Read more
30 people found this helpful
Helpful
Report abuse

Topper
2.0 out of 5 stars Politically Incorrect
Reviewed in the United States on December 6, 2018
Verified Purchase
Haven’t finished this book. But, so far it is dragging. I especially do not appreciate authors who inject political commentary, no matter how subtle. Thus, the low stars. I will finish this book. But, I will never purchase another Parker, Sunny Randal, mystery under this author. Disappointed.
Read more
29 people found this helpful
Helpful
Report abuse

A. KAPLAN
5.0 out of 5 stars A Welcome Return
Reviewed in the United States on December 3, 2018
Verified Purchase
I found this to be a compelling mystery with some unpredictable twists and three-dimensional characters that I was interested in. Perhaps more importantly, for the first new book in the series since Robert B. Parker's passing, the characters and tone felt consistent with what Parker had established in the previous books. It didn't feel like Mike Lupica was copying Parker's style, but he was definitely writing Parker's characters in Parker's world. I enjoyed revisiting Sunny Randall and her friends, and I hope this isn't the last we see of her.
Read more
16 people found this helpful
Helpful
Report abuse
See all reviews

The Blackeys
4.0 out of 5 stars A good start for a new author of the Sunny Randall stories
Reviewed in the United Kingdom on January 30, 2020
Verified Purchase
Having read the six original Sunny Randall stories I was a bit nervous of starting this book by a new author, but Mike Lupica does very well. Much of the old Sunny is here, along with the complex relationship she has with her ex-husband and his family and her own father and Spike.

There are a few errors where the new author has forgotten things that have happened in previous books. For example the mention that Sunny's Mum had recently learned to play bridge, when her hosting Bridge parties is well established in books 5 and 6 of the series.

The author has also invented a new love of baseball for Spike, something not mentioned before, and the sporting references occur far more frequently than in previous books, but I guess he is a sports writer, so it should be no surprise.

Other than these small niggles this was a good story and, in answer, to a key question I will be buying the next book in the series when Lupica has finished it.
Read more
One person found this helpful
Report abuse

Spug The Unwise
4.0 out of 5 stars Enjoyable if confusing
Reviewed in the United Kingdom on June 16, 2019
Verified Purchase
I had thought the Sunny Randall series had been completed. But, it seems, there's a bit more cash to be milked. It's fairly well written and quite enjoyable. Not sure I buy into the story but it's OK.
Read more
Report abuse

Kindle Customer
3.0 out of 5 stars Overdone
Reviewed in Australia on January 19, 2021
Verified Purchase
While the story is engaging, the execution is not up to the standard of the books written by Parker. Lupica lets the characters get lost in introspection, and the way he injects his political views into the story is neither subtle nor clever.
Read more
Report abuse
See all reviews
Back to top
Get to Know Us
Make Money with Us
Amazon Payment Products
Let Us Help You
EnglishChoose a language for shopping. United StatesChoose a country/region for shopping.
© 1996-2021, Amazon.com, Inc. or its affiliates