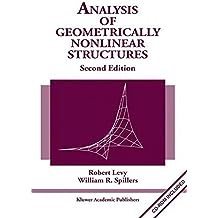 Analysis of Geometrically Nonlinear Structures Mar 14, 2013
by Robert Levy , William R. Spillers
$23.74
The availability of computers has, in real terms, moved forward the practice of structural engineering. Where it was once enough to have any analysis given a complex configuration, the profession today is much more demanding. How engineers should be more demanding is the subject of this book. In terms of the theory of structures, the importance of geometric nonlinearities is explained by the theorem which states that "In the presence of prestress, geometric nonlinearities are of the same order of magnitude as linear elastic effects in structures. " This theorem implies that in most cases (in all cases of incremental analysis) geometric nonlinearities should be considered. And it is well known that problems of buckling, cable nets, fabric structures, ... REQUIRE the inclusion of geometric nonlinearities. What is offered in the book which follows is a unified approach (for both discrete and continuous systems) to geometric nonlinearities which incidentally does not require a discussion of large strain. What makes this all work is perturbation theory. Let the equations of equilibrium for a system be written as where P represents the applied loads, F represents the member forces or stresses, and N represents the operator which describes system equilibrium.
Read more
Other Formats: Hardcover , Paperback 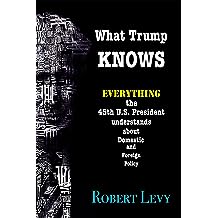 What Trump Knows: Everything the 45th President of the U.S. knows about Domestic and Foreign Policy Feb 25, 2020
by Robert Levy
$2.99

WHAT TRUMP KNOWS attempts to explore inside the Mind of the 45th President of the United States, Donald J. Trump by comparing his empirical knowledge of domestic and foreign politics. It delves deep inside his mind and gives the reader an exclusive and in-depth look inside the man, his ideologies, and his insatiable, ravenous quest to pillage the country while increasing his generational wealth and power.

Who am I kidding? The majority of the pages are BLANK! Illustrating Donald Trump knows absolutely NOTHING about running the United States of America. It’s a Political parody and gag gift; signifying president Trump's complete incompetence and blatant disinterest in domestic and foreign policy. Included are a few narcissistic quotes and misleading and/or false claims Donald Trump has made over the years. The book is for everyone who’s ready to dump Trump now!