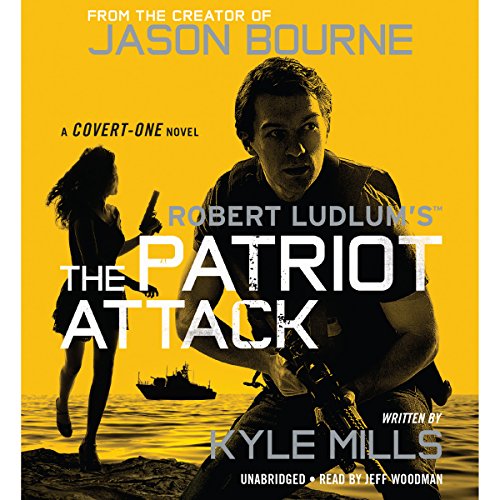 An attack on a Japanese warship brings Japan and China to the brink of war. Meanwhile, top Covert-One operative Colonel Jon Smith is sent on a mission to recover mysterious material from the wreckage of the Fukushima nuclear reactor. When Smith fails to return, CIA agent Randi Russell heads off on an unsanctioned mission to find him. She quickly discovers that the missing samples may be evidence that Japan, led by hawkish military chief of staff Masao Takahashi, has been secretly developing next-generation weapon systems in preparation for a conflict with China. If the Covert-One team can't prevent General Takahashi from provoking a war, the entire world will be dragged into a battle certain to kill tens of millions of people and leave much of planet uninhabitable for centuries.

Enjoy a free audiobook + more
Learn more about Membership
List Price: $28.50
You Save: $3.56 (12%)
By completing your purchase, you agree to Audible’s Conditions Of Use
Sold and delivered by Audible, an Amazon company
Share

4.4 out of 5 stars
4.4 out of 5
591 global ratings
How are ratings calculated?
To calculate the overall star rating and percentage breakdown by star, we don’t use a simple average. Instead, our system considers things like how recent a review is and if the reviewer bought the item on Amazon. It also analyzes reviews to verify trustworthiness.
Top reviews

Michael G Kurilla
2.0 out of 5 stars Japanese pre WWII delusions of global domination
Reviewed in the United States on September 18, 2016
Verified Purchase
The Patriot Attack is the latest offering in Robert Ludlum's Covet One series. This series typically concentrates on bio themed plots with a bit of nanotech thrown in for good measure. This volume is written by Kyle Mills and suggests a hard line nationalistic cabal within Japan that is intent on challenging China and willing to rumble with anyone who gets in their way for global domination. Perennial Covet One agents, Jonathan Smith and Randi Russell go toe to toe with the Japanese military, Chinese intelligence, and even mobsters to avert global catastrophe and armageddon.

As a straightforward espionage novel, this offering is a bit lacking and almost borders on fantasy as despite over 20 years of a pitiful economy in Japan, the reader is told that in fact, Japan has been engaging on technological wizardry in material science (fantastic armor), incredible offensive military weapons (super torpedoes), next generation cyber capabilities (besting the NSA), and sci-fi nanotech (critters that eat any man-made material). If even a fraction of this had actually been possible, Japan could have been dominating the global economy, relegating China to 2nd class status. At the same time, Smith is injured right at the beginning and never gets back to 100%. Meanwhile, Randi, suborns a bunch of civilians and gets them killed. Overall, the plot was a too contrived and strained credulity. Tradecraft was afforded inadequate attention with Covert one operatives simply calling on friends and random "experts" for advice. The eventual denouement over China had a made for TV movie quality affair. It would seem that Covert One is running out of steam and creative concepts. Perhaps a new administration will retire Klein and mothball the group or maybe outsource them to a contract service.
Read more
6 people found this helpful
Helpful
Report abuse

Karen
5.0 out of 5 stars Good story
Reviewed in the United States on July 10, 2021
Verified Purchase
Quite a scary scenario, that some Japanese military personnel had developed a nano technological weapon. They want to wipe out China structurally. These Japanese have such a hatred for China because they have become a big military force. And the Japanese government signed treaties after ww2 that forbids them to have a military strike force. Can they be stopped in time?
Read more
Helpful
Report abuse

C Wm (Andy) Anderson
#1 HALL OF FAMETOP 500 REVIEWER
5.0 out of 5 stars Though Not Ludlum Quality, a Good Introduction to the Next Generation of Suspense, Action-Adventure Espionage Thrillers
Reviewed in the United States on October 6, 2015
Verified Purchase
Length: 528 pages.

I bought this book for two primary reasons. I loved Robert Ludlum's many varied novels and characters. The first novel I listened to, on cassette tape, was back during the late 1980's, I think. Possibly even before that. Point is, Ludlum was good at suspense and intrigue, plus excelled at developing characters.

Which brings us to The Patriot Attack, ostensibly a Jason Bourne novel. Be forewarned, this is not a Bourne continuation. Not even remotely a Bourne novel. Strike one.

Another reason I purchased this book was due to my pleasure from a just-released novel concerning Vince Flynn's Mitch Rapp. Terrific stand alone that, I surmised, if Kyle Mills could replicate Rapp so well, yet produce a terrific stand alone sequel such as The Survivor, well, maybe I had better read the latest installment of Covert One. What Mills did so well with Rapp, he, uh, fell far short of the mark with The Patriot Attack. Why?

The premise, Japan and China, is a brilliant stroke. What hurt was the initial setting of our heroine, Randi Russell, in Egypt pursuing American-born, Charles Hashem, who is of Iranian descent, At first take, this seemed plausible. Well, except that he is a Muslim named Charles, of Iranian descent, not Arab, set in Egypt.

Despite its implausibility, for me, having lived in Egypt some 15 years and in Libya for another two, plus having spent time in Israel, Palestine and in the Gulf the setting of an Persian in Arabian Egypt was not well executed. But, then, I excused that as just an obligatory initial, get-the-feel sort of transition point to get us set to depart from, to go to the Orient.

And, since I spent a good deal of time in nuclear energy (as a welding inspector) I found it a great idea to base this novel on the aftermath of Japan's quake and tsunami. Brilliant stroke, thought I.

That premise was smart. Remains so. And, the novel actually is well-written so long as one forgets about Jason Bourne and Robert Ludlum and an Iranian terrorist in Egypt.

A bigger mistake, it seems to me, is that Kyle Mills ended it with a stunning twist that may, or may not be, a cliffhanger. It seems to have been written with an eye to a sequel, but not necessarily so. Sort of a teaser ending reminding me of the lady and the tiger...

Having ranted about what I did not enjoy, or at least, what I had to meander through at a snail's pace, my wriggling was actually well worth the effort, as will be seen by the balance of this review.

Randi Russell is an interesting heroine that, I am sure, may become sort of a female Mitch Rapp, if there are actually more Covert One or Jason Bourne novels forthcoming. Perhaps Mills will sedgeway Rapp into a joint venture with Russell and, thereby, put a nail in the coffin, so to speak, in the Ludlum franchise.

And, let's be honest here, Ludlum has been gone so long that it is time to create a fresh legacy in the line, rather than merely milk the legacy for a few dollars more.

Except that The Patriot Attack is a bit fluffier than the story line justifies, and aside from the above noted strikes, this tome is not a strike out. Nor is it a home run. It is something in between these to points. It is worth reading and, I am sure, in time I will buy the audible.com version and enjoy listening to it.

By all means, I do recommend reading this good novel. Bear in mind, though, it is clearly not Ludlum. Nor does it measure up to Ludlum's best work. If you do keep that in mind, I am betting you will find great pleasure in reading Robert Ludlum's The Patriot Attack.

Note: I originally rated this at five stars. After a couple hours thinking it over, I raised the rating to five stars. Why? I think I was a bit too hard on Mills. In part, because Ludlum set such a high standard and, in part, because I was so delighted with his work with Vince Flynn's Mitch Rapp that I thought he had done as well replicating one of my other favorite characters, Jason Bourne.

Cecey
4.0 out of 5 stars Disapointing End
Reviewed in the United States on October 23, 2015
Verified Purchase
I have all of these books series in hardcover. I love the characters since one of my brothers gifted me The Cassandra Compact and got hooked
Hated to have Jon left an almost invalid and Randi taking off for parts unknown again. About time they find out they really care for each other. Is there another book coming anytime (hopefully) soon?
Read more
One person found this helpful
Helpful
Report abuse

Charles R. Dooley
3.0 out of 5 stars Slow and Lazy Plotting
Reviewed in the United States on December 1, 2015
Verified Purchase
Had hard time staying with this book. First two thirds of book were boring. Too many books in this genre today have a problem with bringing enough reality into the story to make it plausible. To be sure, these tales always require an element of belief suspension for the story to work. This book failed completely. Sending a bunch of college students to a foreign country to use an untried nuclear boring tool to pierce the side of a lunatic-controlled mountain and not anticipate you'll be observed is beyond the pale.
Read more
2 people found this helpful
Helpful
Report abuse

Peter Carlin
5.0 out of 5 stars Kyle mills is awesome
Reviewed in the United States on June 10, 2017
Verified Purchase
Always loved his stand alone works and greatly enjoyed his newest under the covert one banner. He's always been adept at melding technology and science into his books and he does so here with highly advanced weaponry. Love the imagination! He works well with the covert one concept and created a page turner I finished in 48 hours. Look forward to his next contribution to either the series or his own work.
Read more
Helpful
Report abuse
See all reviews

James Fitzpatrick-Ellis
5.0 out of 5 stars Another superb read.
Reviewed in the United Kingdom on April 27, 2018
Verified Purchase
This is another fantastic book in the Covert One series, following Jon Smith and his team in an exciting secret mission to investigate a strange and shocking event.
Read more
Report abuse

David Edwards
5.0 out of 5 stars Always Good Ludlam
Reviewed in the United Kingdom on November 7, 2020
Verified Purchase
The book lived up to the rest of the covert 1 series---had to keep reading till I finished it.
Read more
Report abuse

Mr G A Whalley
5.0 out of 5 stars Five Stars
Reviewed in the United Kingdom on May 24, 2018
Verified Purchase
Usual good story
Read more
Report abuse
See all reviews
Back to top
Get to Know Us
Make Money with Us
Amazon Payment Products
Let Us Help You
EnglishChoose a language for shopping. United StatesChoose a country/region for shopping.
© 1996-2022, Amazon.com, Inc. or its affiliates