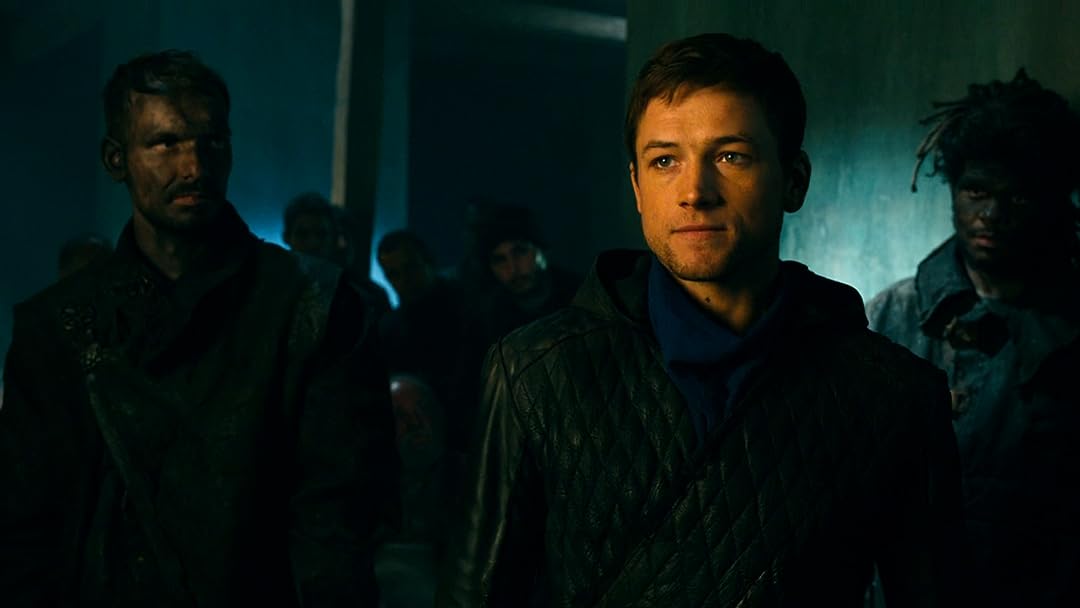 QuietmanRMReviewed in the United States on February 7, 2019
1.0 out of 5 stars
A bad Guy Ritchie impression featuring a woke Eggsy and AntiFa as heroes
Great action sequences completely overshadowed by someone deciding we need a woke version of Robin Hood. Evil Christians and Rich people attacked the poor Muslims during the crusades. The unjust occupation is propped up by The Military War Machine. Such a clever modern parallel. Using modern military terms, costumes that look like military uniforms, oh my, how brilliant. Robin Hood is played by Eggsy from The Kingsman. Seriously. Not just the same actor. he literally plays the roles identically. The grand finale battle has the poor people dressed as an AntiFa mob fighting the evil soldiers dressed to resemble a police SWAT team. It was such a clever imagining that the director forgot he actually still had to make a decent movie. Wait for it to show up on cable or Netflix, that way you won't be shamed into watching this to the end because you just spent good money to rent this turdfest yawn party.
300 people found this helpful

JeremyReviewed in the United States on February 9, 2019
1.0 out of 5 stars
Had potential but went liberal
Verified purchase
Could of been good. It took the classic depiction of oppressive government and over taxation and made it a anti Christian class warfare movie. Sad.
205 people found this helpful

DVReviewed in the United States on February 8, 2019
1.0 out of 5 stars
Why another movie? Why are all the actors acting as though they're acting?
Verified purchase
There have been 573 movies and TV episodes about Robin Hood. Someone decided on another remake, and it would be the worst ever. Wooden performances, predictable plot, some weird twist to incorporate The Italian Job, updated clothes.... Apparently the dog ate 3 separate scripts and vomited out a mess of junk that turned into the script for this disaster.
124 people found this helpful

QuinReviewed in the United States on February 11, 2019
1.0 out of 5 stars
This movie “STOLE” my money! Waste of time!
Verified purchase
Terrible movie! We made the mistake of buying this movie! I want my money back!
88 people found this helpful

Debbie CameloReviewed in the United States on February 16, 2019
5.0 out of 5 stars
THIS ROBIN IS THE MEDIEVAL NINJA WARRIOR
Verified purchase
I absolutely was entertained from beginning to end. No complaints about the setting, the clothes, the plot and the actors. Taron Egerton was a combination of Legolas meets Donnie Yen. Jamie Foxx was the Yoda from Arabia. Every part each actor played suited them to a T. Brilliant script, non-stop action and a little romance thrown in. Is their fight over? Not by a long shot. I would love a sequel to this Robin Hood from Sherwood Forest.
54 people found this helpful

Amazon CustomerReviewed in the United States on February 21, 2019
5.0 out of 5 stars
It's better then the rating
Verified purchase
I don't understand why it has so many bad ratings, I loved it. Yes its darker and more corrupt then all the other versions but that's how that time period was people it wasn't a happy time. I loved that it was the beginning of his tale and the audience got to see how and why Robin Hood became an outlaw. I didn't think the actors overreacted. I loved the stunts and the archery work. Also loved that there wasn't much CGI if there was any at all. Glad I watched it cause I was worried it wouldn't live up to its hype based on the rating.
43 people found this helpful

Turtle the WiseReviewed in the United States on February 7, 2019
3.0 out of 5 stars
Pacing feels off
Verified purchase
This is a serviceable film, despite having some pacing issues. It is a dark telling of the Robin Hood myth, that does have its good parts, mostly in the form of Jamie Foxx. The mine-town is underwhelming, as are the main inhabitants - Marian and the Town's spokesman. If the film did away with them, and kept to the double agent theme with Robin Loxely / Robin Hood - it would have been much better. It needs to trim a half an hour somewhere and invest in a better musical score.
30 people found this helpful

MLareauxReviewed in the United States on March 10, 2019
1.0 out of 5 stars
Run, don't walk, to the nearest exit.
Verified purchase
Here's what happened: director Otto Bathurst (who may or may not have directed anything before) watched Rocky, 300, a Baz Luhrmann movie,Ferris Bueller's Day Off, Gladiator, Batman, Kingsman, The Lord of the Rings, and at least one of those Mortal Kombat movies, got really, really drunk, and fell into a stupor. The dream he had while in this state was the blueprint for Robin Hood. The film takes elements from a host of other, better films and puts them together in a silly, disjointed fashion, leaving the viewer scratching his head about what is going on. The audience is told explicitly at the beginning to ignore the stupid, anachronistic setting and just go with it. If you do that, you'll only be slightly less confused and disappointed than you would have been otherwise.
Taran Egerton reprises his role as Eggsy, only this time without the fun. Joining him is Jamie Foxx, chewing up scenery as a larger and angrier version of Achoo from the Mel Brooks Classic "Men in Tights." Together they hatch a plot to defeat the evil Sherriff of Nottingham played by a guy desperately trying to be Alan Rickman, and his diabolical pseudocatholic allies by running around in costumes stolen from a Mortal Kombat movie and committing armed robbery with specially made rapid-fire bows. Their brave criminal activity inspires the townfolk to rise up and don masks of their own. Since there aren't enough scenes taken from other movies, Bathurst ends the film by having Maid Marion turn into Bella Swann as she chooses between two equally worthless men vying for her affection. I won't tell you which one she chooses, but I will say that no one in this movie sparkles in the sunlight.
Her choice sets up a sequel that will never, ever happen because movies are supposed to turn a profit, and this one didn't. If you haven't seen this movie yet, I would advise you to stay on your current path and give this one a wide berth.

25 people found this helpful
See all reviews
Back to top
Get to Know Us
Make Money with Us
Amazon Payment Products
Let Us Help You
EnglishChoose a language for shopping. United StatesChoose a country/region for shopping.
© 1996-2022, Amazon.com, Inc. or its affiliates