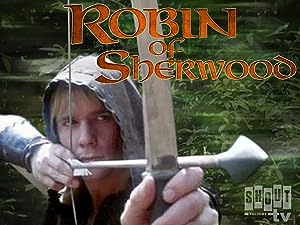 (54)
1985TV-PG
A forest mystical being appoints two men in succession as the legendary outlaw defender of the oppressed.

Papillon PicassoReviewed in the United States on March 20, 2006
5.0 out of 5 stars
There will never again be a better Robin Hood!
Please, please let this series be on DVD someday soon. This series was the most exquisitely crafted work of art...it would be a tragedy if it were never to be released on DVD. This series was magnificent...beautiful & talented actors, historically impressive, a VERY REAL, raw and inspirational experience. The performances given by Michael Praed were so powerful...no one will ever be a better Robin Hood (not even Jason Connery in the later episodes!) As another viewer mentioned, I also grew up watching this series. It is in my top 5 all-time favorites! My tapes are worn-out as well...I would also seriously buy every single episode if it were ever realeased on DVD, regardless of price.
24 people found this helpful

Ped XingReviewed in the United States on December 9, 2007
5.0 out of 5 stars
Yes, these discs work in the USA!
Everyone else already noted how great the original series was... Let's focus on something else: These UK Nettwork DVDs!

First, I'm in the USA, and want to report that YES, these discs DO work in the USA! They really are Region 0 (there are lots of conflicting reports) which means they'll load and play in any region-locked DVD player anywhere in the world.

Next - they are PAL, though, not NTSC, so you must have a DVD player and TV that can display them. Most current DVD players can handle this fine, with some converting the output to NTSC and others simply passing the PAL to the TV. Many modern TVs will handle a PAL signal, but not all.

Finally, although they are "digitally remastered", the video quality isn't great. I have a feeling the source film (yes, this was shot on film) has degraded somewhat, and this is the best you can get. The audio is amazing, however, except for the one commentary track that was recorded to the surround channels instead of the main ones...

King RichardReviewed in the United States on June 17, 2006
5.0 out of 5 stars
Please Release This In My Lifetime!
Is there a good reason why such a quality series of programs can't be released in the US? Both the Michael Praed and Jason Connery versions are the best-acted and best-filmed versions of the Robin Hood legend. If you agree, please add your voice to those who'd like to see this series released here.
24 people found this helpful

Lance J. HoltReviewed in the United States on June 12, 2007
5.0 out of 5 stars
The most authentic and well researched Robin Hood
It so happens that I played Robin Hood in a stage production in Seattle years ago and had done a LOT of research on the myths surrounding Robin Hood/Robin of Loxley, Herne the Hunter, etc. and this series really utilized beautifully the (albeit 80s scholarship) research that I found most provocative. Acting is excellent and the stories thoughtful and exciting. Bravo to the BBC!
2 people found this helpful

D. C. RossReviewed in the United States on December 13, 2006
5.0 out of 5 stars
Love this series
I loved this series when it aired on cable. While it has not been released in the US you can buy a region 0 version of the complete series from amazon.co.uk. I did and I and am enjoying the whole thing all over again.
4 people found this helpful
See all reviews
Back to top
Get to Know Us
Make Money with Us
Amazon Payment Products
Let Us Help You
EnglishChoose a language for shopping. United StatesChoose a country/region for shopping.
© 1996-2022, Amazon.com, Inc. or its affiliates