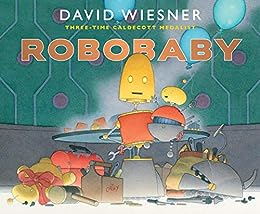 A Behind-the-Scenes Look at Robobaby with David Wiesner

I’ve always been fascinated by mechanical and industrial things, the workings of watches, locomotives, anything with gears. Robots—walking, talking machines!—are a part of this fascination, and my favorite robots were found on screen: Robby from Forbidden Planet, the mechanical Maria from Metropolis, Gort from The Day the Earth Stood Still, and even Rosie from The Jetsons.

So it’s no surprise than when I created an app with multiple worlds, I was determined to include a robot world. Initially I drew domestic scenes of a robot family, but they didn’t end up factoring into the narrative. I kept thinking about them, though. I knew they had a story to tell. I decided they needed their own book.

When I started to think about a “robot book,” I first drew spare parts, then a big box of parts. Of course those parts would have to be assembled—but into what? Aha! This must be where robot babies come from! They are ordered from Robobaby Inc.

That led me to think about how adults always seem to need kids to show them how to use current technology. This introduced me to my young heroine, Cathode—AKA Cathy—who alone knows the correct way to assemble her newly delivered (so to speak) little brother.

In addition to Cathy, I had many different robot designs and I wanted a big cast. But the first ones to be created were the nuclear family: Cathode, along with Diode, her mother, and Lugnut, her father.

I begin in a sketchbook, making loose drawings to determine their basic shapes. Then I try to get a feel for their posture, how they move, and how they look from different angles. This process begins to reveal the personalities of the characters.

With the basic designs determined, I write the story. Many of my books are wordless, but some have text—Robobaby is one of those with text. But regardless of whether there is text or not, I write my stories in pictures first.

When the narrative is set, I begin to finalize the look of my characters. (The story often evolves as I refine the art.) I always make models of my characters for drawing and lighting reference, and Robobaby was no exception. I usually use a modeling compound, but since these characters are made of metal and have very geometric and symmetrical body parts, I decided to try a new approach to the models. I drew technical specs for them and had them 3D-printed in plastic. (My son knows how to use CAD and made the files that went to the printer. Thank goodness for kids—life imitates art!)

Here is the final painting and the image with text. This is where Cathode first meets her new baby brother—Flange!

"Wiesner’s friendly robots, despite their clunky metal framework, infuse their twilit extraterrestrial world with warmth and mutual support, making this a convivial, if offbeat, addition to the new-baby-on-the-way collection." –The Bulletin of the Center for Children's Books --This text refers to the hardcover edition.

David Wiesner is internationally renowned for his visual storytelling and has won the Caldecott Medal three times—for Tuesday, The Three Pigs, and Flotsam—the second person in history to do so. He is also the recipient of three Caldecott Honors, for Free Fall, Sector 7, and Mr. Wuffles. He lives near Philadelphia with his family.  www.hmhbooks.com/wiesner  --This text refers to the hardcover edition.

3.8 out of 5 stars
3.8 out of 5
246 global ratings
How are ratings calculated?
To calculate the overall star rating and percentage breakdown by star, we don’t use a simple average. Instead, our system considers things like how recent a review is and if the reviewer bought the item on Amazon. It also analyzes reviews to verify trustworthiness.
Top reviews

KCW
1.0 out of 5 stars Nonsensical storytelling
Reviewed in the United States on March 30, 2021
Verified Purchase
I have to admit that when I read the author was a three-time Caldecott award winner, I was skeptical. Why? Because great illustrators do not make great writers. I understand that the author wanted to draw robots (and the illustrations are lovely), but why not hire a professional writer for the story? There is actually an art to writing children's books - when they're done well, they're a joy to read. This book, on the other hand, had no story. The many characters were impossible to follow. You cannot name characters things like "Cathode" and "Diode" because small children do not understand what those things mean. They cannot follow a story if they're seriously confused (and I was also seriously confused).

I felt compelled to write a review because I wish creators would have more respect for how difficult different aspects of the creative process can be. I'm a writer, and I would never pretend to be an illustrator.
Read more
One person found this helpful
Helpful
Report abuse

John
4.0 out of 5 stars clever, but
Reviewed in the United States on November 27, 2020
Verified Purchase
I couldn't tell who the optimum audience for Robobaby would be. It's a clever premise, but the terminology and puns will go way over the heads of young children. I'd guess it's for an adult to read to a kid, explaining along the way.
Read more
2 people found this helpful
Helpful
Report abuse

Sarah E. Baade
1.0 out of 5 stars Don’t recommend
Reviewed in the United States on April 17, 2021
Verified Purchase
This story just does not read smoothly or naturally. I think maybe they were going for a comic book type of approach with the writing style but it just didn’t flow properly. The concept of the story is cute, it just wasn’t executed well. There is just too much happening and all of the text is conversation but without additional context. We all found it to be confusing, scattered, and difficult to read. The lovely illustrations are not enough to make up for how poorly this is written.

We received this in our monthly book subscription box. Thankfully, the other book we received in this box was excellent. Hopefully this was a one time fail.
Read more
Helpful
Report abuse

Jordan G
1.0 out of 5 stars An overall miss
Reviewed in the United States on March 29, 2021
Verified Purchase
Received this in our Amazon book box for 5 year olds and it was a massive fail. This book is probably best suited for younger kids who enjoy comics but I DO NOT recommend it for children who are just starting out reading. It's just a jumbled confusing mess.

From an adult standpoint.. the illustrations are really good.. but the book.. not so much.
Read more
Helpful
Report abuse

Jennifer C.
1.0 out of 5 stars Horrible? Confusing? Poorly written? JUMBLED MESS?
Reviewed in the United States on March 20, 2021
Verified Purchase
In our first Amazon book box and if the next set of books isn’t significantly better we will cancel.

Peter L.
2.0 out of 5 stars What did we just read?
Reviewed in the United States on March 17, 2021
Verified Purchase
This book misses the boat. I cancelled my Amazon kids book monthly subscription because of this book’s awkward reading style and unclear story line. A children’s book shouldn’t make you think “What did we just read?” Maybe some will like it, but I haven’t found anyone yet.
Read more
One person found this helpful
Helpful
Report abuse

Rad Dad Shred All Time
2.0 out of 5 stars A big NO
Reviewed in the United States on March 20, 2021
Verified Purchase
This book is absolutely terrible. Not sure how a 3 year old is supposed to follow along with this. Super disappointed. I guess from now on I will be checking my child’s book subscription before allowing Amazon to send me something that makes absolutely zero sense.
Read more
One person found this helpful
Helpful
Report abuse

Amazon Customer
1.0 out of 5 stars Jumbled mess
Reviewed in the United States on March 30, 2021
Verified Purchase
So this confusing, jumbled mess was in my son's first "book box." I'm already second guessing that subscription. A book with robots, a Caldecot winning author...what could go wrong. Well..I guess everything. The books main gag of repeatedly using robotics/electronics terms that go over most adults head coupled with almost no story left me making up a story for my son to try to make sense of the pictures instead of trying to explain the actual story.
Read more
Helpful
Report abuse
See all reviews