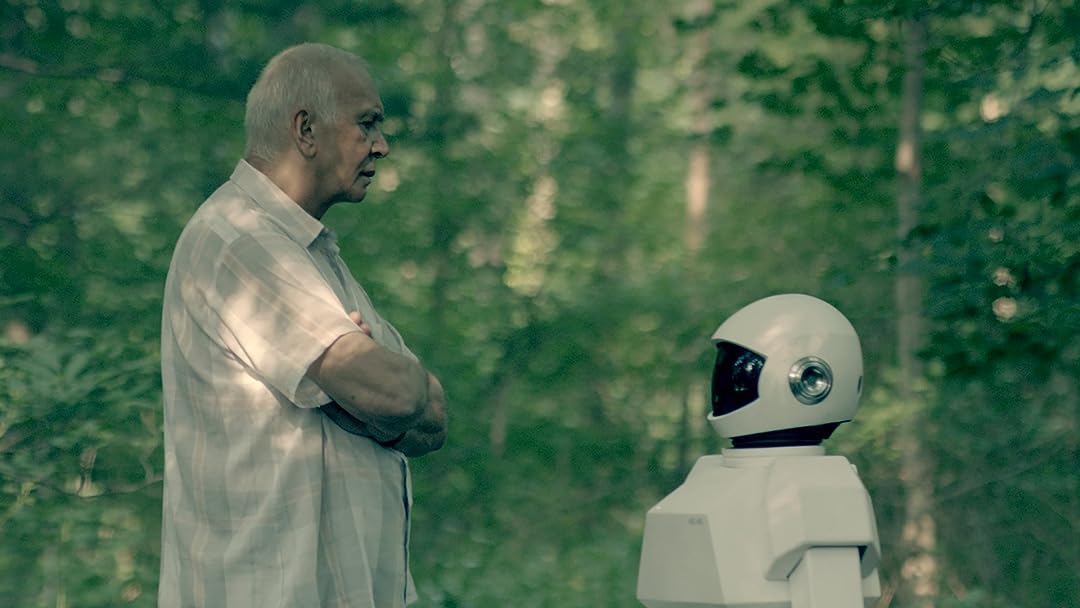 L. AdamsReviewed in the United States on November 10, 2018
5.0 out of 5 stars
An unfortunatelportrsyedy common reality confronted in an unusual way
Verified purchase
"Robot and Frank" would have been destined for the robot junkyard without the stunning performances of Frank Langella, Susan Sarandon, representing the older generation in th ensemble cast, and Liv Tyler and James Marsden the younger. Langella in particular must have drawn on first-hand knowledge to have so convincingly portrayed some of the behavioral nuances of a person with an actual neurodegenerative disease. I am a caregiver, and while all aspects of daily life were not emphasized, the ones that were, were right on in my experience. Christopher Ford has made a successful leap from writing one of the action-packed Spiderman movies to this slower paced, but moving and entertaining fable. There is a subtle tribute to "The Notebook" towards the end. Now for the symbiotic relationship with Frank's robot. Near future or not, just substitute the word caregiver for robot. This is not a negative, it's just the way it is played in the film and the way it is in real life now. "Robot and Frank" is one of those films that will probably split reviews by age. You have to be old enough to acknowledge the reality outlined in the film and brave enough to think about how you would confront such a situation. I am not sure how the film could have been more complete. Well worth the five stars and your time.
24 people found this helpful

TechnologistReviewed in the United States on January 16, 2019
4.0 out of 5 stars
Wonderful Movie
Verified purchase
A great cast that makes this movie seem real. Of all the futuristic movies I've ever seen this is the most believable. It blends the world as we know it with the world emerging with technology in a very realistic window into the near future. I've both loved and hated Frank Langella's acting over the years, but when I love it, I love it, and this is one of those that I love. He really makes this movie believable and makes you care about his character. The only reason why I did not give it a five star rating is because of the loose ends. In his plans he spots some irregularities that could in the end make him the good guy, but they are not followed through. He also does not have a solution for the robot that he should have had with all his other planning. One could say because of his failings that both of these are explainable, but with all the other well thought out plans it is inexcusable. We empathize with a man that has more sense with failing memory than those around him. It would have been a better ending had those loose ends been closed. Still, it is a great movie worth seeing.
8 people found this helpful

Russell SReviewed in the United States on October 15, 2016
5.0 out of 5 stars
have p[atience and you will be rewarded with a fine movie.
Verified purchase
Frank, a retired cat burglar, has two grown kids who are concerned he can no longer live alone. They are tempted to place him in a nursing home until Frank’s son chooses a different option: against the old man’s wishes, he buys Frank a walking, talking humanoid robot programmed to improve his physical and mental health. What we get is, initially, Frank rebelling against the robot even though at times he realizes that his mental health is going downhill. He finds common ground with the robot and plays his crusty old man part to the hilt. He is from a bygone time. The chemistry between the Robot and Frank is charming and inevitable. This is a slow paced movie that you need to be patient to watch it grow, and grow it will. Frank Langella, James Marsden as his son and Susan Sarandon as the librarian ore all spectacular. I fell in love with the Robot too.
21 people found this helpful

L. ManzellReviewed in the United States on June 20, 2019
5.0 out of 5 stars
Beautiful, Heartwarming and Well acted
Verified purchase
A treasure of a movie about a man in his later years, Frank, his adult children who are immersed in their own lives and an unusual care-giver, the robot. The Robot has no name and is purchased as a care-giver for Frank, now afflicted with early to mid stage Alzheimer's, by Frank's son. While used to living his own life without the intervention of others, forgetful as he is, Frank is used to and desperately clings to his independence. His children worry about him but are busy much of the time. Even though Frank is, at first, firmly resistant to his new mechanical care giver, the Robot grows on Frank and us all, through it's non judgmental support. The comparison remains subtle, but present, of the fragility of our machinery and the Robot's. If we cannot function appropriately we can be scrapped or put away.
As we watch the Robot grow on Frank, we grow to appreciate Frank, his relationship with the Robot and the fragility of life in general.

This is definitely a movie that may not suit those who are unfamiliar with care-giving and growing older. But for those who are able see into its depth and are familiar with care-giving, this movie brings humor, fun, adventure, hope and selflessness into tale of life that always ends sadly. Frank's previous occupation as a well known burglar creates some tense adventure and humor as well. Brilliantly acted and written, this is a movie that should not be missed.

Mike Billington author of Murder in the Rainy SeasonReviewed in the United States on March 8, 2020
4.0 out of 5 stars
A light touch on a heavy issue
Verified purchase
A cranky rogue who is not aging gracefully gets a robot companion.
An interesting premise for a movie, especially since the lead character was once a thief who is slowly slipping into dementia. It's an uncomfortable subject to deal with for many people, especially those with aging parents who are - at some point - going to require some form of care. I can relate to that because there was a point in my life when I cared for my late mother and I can also relate to it because, as I near my 73rd birthday, I sometimes find myself trying very hard to remember where I put my glasses or what it was I was looking for when I walked into my living room.
The makers of this film address this issue gently, with a touch of humor, but they don't sugarcoat it. The fact is, Frank is cranky and he quickly loses patience with his family and with other people he knows. He is, in short, not really a very nice person.
He is also crafty, however, and he attempts to recruit his new robot companion into pulling off a jewelry heist. That leads to some funny scenes and keeps the audience wondering whether or not he will succeed in corrupting his logic-based companion.
The direction is smooth and the writing, while not edgy, does hit some of the key issues facing children who find themselves trying to cope with an aging, cantankerous parent. The script also addresses the issues facing those parents who are slowly losing touch with reality and yet want to retain as much independence as possible.
Not a box office blockbuster, but a nice take on an issue that faces many of us - on both sides of the coin.

RobertReviewed in the United States on October 28, 2018
1.0 out of 5 stars
Not worth the time.
Verified purchase
Just a bunch of crappola. Pure fantasy. Not even science fiction. Not even good for kids. A real ex-criminal wouldn't be treated so sweetly by police. At least, not a non-white criminal, for sure. And, is it supposed to be funny to steal highly valuable things? I didn't see anything cute or funny in it. It sure sets a bad example of how to get away with stealing big. But I guess that's what a heist is all about: having fun while stealing. Maybe just not my kind of comedy. But I always love Susan Sarandon, even if she only comes and goes a little in the movie.
2 people found this helpful

Amazon CustomerReviewed in the United States on January 25, 2021
3.0 out of 5 stars
The characterization of the cop and robbed-yuppie being complete jerks kinda ruined it
Verified purchase
Anybody who is watching this kind of movie probably isn't stupid. Those people are watching superhero movies right now. We don't need to be hammered over the head with caricatures of the self-centered, boorish, and astonishingly rude yuppie, or the cop who breaks about 7 rules of due process in hounding this elderly man. If a policeman walked through my house uninvited under any circumstances I'd be on the phone to the PD and my attorney instantly. I wouldn't quit till that person was busted down to traffic duty. And if he walked some jerk into my home accusing me of robbing him in front of my family, I'd own that kid's house before it was all done. Maybe that's just me, but I kinda think the character Frank Langella played would have done the same. Frank and Susan were lovely in this. Somebody should write a love story with the two devoid of the whiny kids and the idiot cop.

L. PaulReviewed in the United States on October 10, 2016
5.0 out of 5 stars
A Gem of a Movie!!
Verified purchase
I loved this movie, and have watched a few times. It really touched my heart, and I found myself caring deeply about Frank.
Frank is an elderly gentleman who is losing his memory. His children live far away and can't really give him the help he needs. Frank is also rebelling against losing his place in the family hierarchy as head of the family, and resists doing as he is told. When his son gets him a robot "butler", Frank is outraged. However, Frank has a very interesting past that he has all but left behind...until now. You will love this film. Its a little slow, but worth every minute.
9 people found this helpful
See all reviews
Back to top
Get to Know Us
Make Money with Us
Amazon Payment Products
Let Us Help You
EnglishChoose a language for shopping. United StatesChoose a country/region for shopping.
© 1996-2021, Amazon.com, Inc. or its affiliates