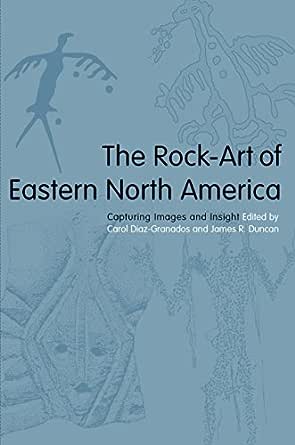 Flip to back Flip to front
Audible Sample Playing... Paused   You are listening to a sample of the Audible narration for this Kindle book.
Learn more
ISBN-13: 978-0817350963
ISBN-10: 0817350969
Why is ISBN important?
ISBN
This bar-code number lets you verify that you're getting exactly the right version or edition of a book. The 13-digit and 10-digit formats both work.

In archaeology, rock-art—any long-lasting marking made on a natural surface—is similar to material culture (pottery and tools) because it provides a record of human activity and ideology at that site. Petroglyphs, pictographs, and dendroglyphs (tree carvings) have been discovered and recorded throughout the eastern woodlands of North America on boulders, bluffs, and trees, in caves and in rock shelters. These cultural remnants scattered on the landscape can tell us much about the belief systems of the inhabitants that left them behind.

The Rock-Art of Eastern North America brings together 20 papers from recent research at sites in eastern North America, where humidity and the actions of weather, including acid rain, can be very damaging over time. Contributors to this volume range from professional archaeologists and art historians to avocational archaeologists, including a surgeon, a lawyer, two photographers, and an aerospace engineer. They present information, drawings, and photographs of sites ranging from the Seven Sacred Stones in Iowa to the Bald Friar Petroglyphs of Maryland and from the Lincoln Rise Site in Tennessee to the Nisula Site in Quebec.

Discussions of the significance of artist gender, the relationship of rock-art to mortuary caves, and the suggestive link to the peopling of the continent are particularly notable contributions. Discussions include the history, ethnography, recording methods, dating, and analysis of the subject sites and integrate these with the known archaeological data.

Carol Diaz-Granados is a Research associate in the Department of Anthropology, Washington University in St. Louis, specializing in the study of North American rock art and associated belief systems. --This text refers to an out of print or unavailable edition of this title.

"More than simply mapping and describing rock art sites found throughout Eastern North America, this milestone study also focuses upon interpreting their functions within the societies that produced them. . . . Essential."
—CHOICE

"A welcomed addition to the growing literature on the interpretation of prehistoric and historic rock-art. . . . (It) is a thoughtful and solid scientific introduction into the sacred landscape of Native America."
—Arkansas Review
--This text refers to an out of print or unavailable edition of this title.

Jan loveday
5.0 out of 5 stars Very happy!
Reviewed in the United States on November 17, 2021
Verified Purchase
The book is very informative and helpful!
Read more
Helpful
Report abuse
See all reviews
Back to top
Get to Know Us
Make Money with Us
Amazon Payment Products
Let Us Help You
EnglishChoose a language for shopping. United StatesChoose a country/region for shopping.
© 1996-2021, Amazon.com, Inc. or its affiliates