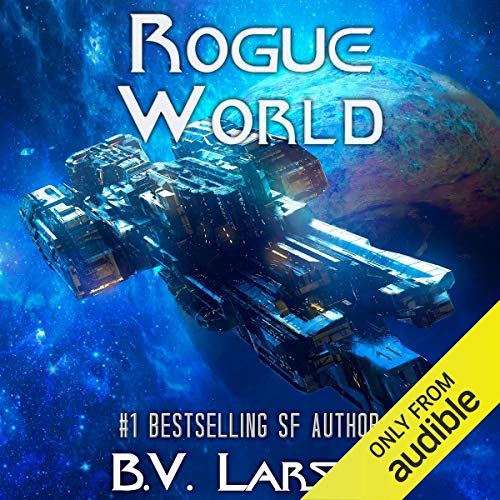 B. V. Larson (Author), Mark Boyett (Narrator), Audible Studios (Publisher) & 0 more
4.6 out of 5 stars 1,067 ratings
See all formats and editions
Sorry, there was a problem loading this page. Try again.

The Galactics arrived with their Battle Fleet in 2052. Rather than being exterminated under a barrage of hell-burners, Earth joined a vast Empire that spanned the Milky Way. Today, Battle Fleet 921 is returning to Earth. It hasn't been seen by human eyes since our blissful day of Annexation. But what should be a joyful occasion, a chance to grovel at the feet of superior lifeforms, is rapidly becoming a nightmare. Over the last century, humanity has engaged in many activities that our overlords find...questionable. A panic ensues, and Legion Varus is deployed to erase certain "mistakes" our government has made. Projects must be purged to stop Imperial military action. Among the thousands marching to war is one man no politician has ever enjoyed dealing with. One man who's destined to follow his own unique path through galactic law, morality and the stars themselves.

James McGill is about to make history.

Rogue World is the seventh book of Undying Mercenaries series, a novel of military science fiction by best-selling author B. V. Larson.

Kindle Customer
5.0 out of 5 stars Excellent! Hilarious! And an absolutely horrific story
Reviewed in the United States 🇺🇸 on January 5, 2023
Verified Purchase
This story made me feel like I was forever dangling over a cliff!

It's an exciting read!

Robert Redfeather
5.0 out of 5 stars The McGill Saves Humanity
Reviewed in the United States 🇺🇸 on November 18, 2022
Verified Purchase
This one introduces a couple of characters you'll come to enjoy . . . and some convenience plot twists! It's good to have useful deus ex machina to move events along.

I am not going to complain about that! Having a mix of characters to draw from to manipulate and even carry a plot from thread to thread takes work! B.V. Larson knows what he's doing and how to do it, and gets it done with style.
Read more
Helpful
Report abuse

Charles F. Kartman
4.0 out of 5 stars Things get complicated, as they always do, and tremendously entertaining
Reviewed in the United States 🇺🇸 on April 17, 2017
Verified Purchase
I love Mr. Larson's books, and appreciate how he fills a needed niche in science fiction: inventive and often amusing space opera. At his best, he is surprisingly inventive, as in the introduction of revival machines for Earth's mercenary companies like Varus Legion, in which our McGill serves as a rising star, albeit one almost universally recognized as a lying schemer. Thankfully, Mr. Larson does not trouble himself or his readers with faux scientific explanations, but simply accounts for the exotic stuff by having it come from the advanced civilizations at the center of our galaxy.

The older civilizations run things from afar and are sticklers for their rules which, when broken, bring down extermination of worlds. Earth avoided such a fate previously, and became responsible for an area of space as a result. Now, Earth is again threatened, this time by its responsibility for the forbidden activities of a "rogue world" within its sphere. Things get complicated, as they always do.

This is all tremendously entertaining. My only reservation is that for a series that was about a new member of a mercenary company with lots of combat requiring frequent use of the revival machines, it has evolved into one in which McGill goes off on solo mis-adventures, sometimes involving a teleportation suit, and combat involving his familiar group is an occasional interlude. Inevitably, a certain been-there-done-that feeling creeps in.
Read more
One person found this helpful
Helpful
Report abuse

Joshua Lloyd
5.0 out of 5 stars Good read
Reviewed in the United States 🇺🇸 on November 5, 2021
Verified Purchase
If you're a fan of the series then this installment doesn't disappoint. The familiar characters up to new hijinks like you've come to expect.
Read more
Helpful
Report abuse

Martin Sweitzer
5.0 out of 5 stars Like a fine wine we have all been waiting for. It is here and is is glorious
Reviewed in the United States 🇺🇸 on March 16, 2017
Verified Purchase
Good Ole James McGill is back! While the previous books in this series have usually been centered around a specific planet / event Rogue World just blows it all open. Galactic Crimes indeed!

This books has a lot of the global politics and some amazing interactions with the Galactics. Like Laugh Out Loud amazing dialog. So so good!

James has steadily risen in rank and I was afraid that we would lose some of his antics that he does as an individual. Not so! It is actually even better in some cases as he has more tools to use to try and get out of the situations he manages to find himself in.

Can't wait for the next book. It is going to be wild!
Read more
17 people found this helpful
Helpful
Report abuse

brazenraccoon
5.0 out of 5 stars Another terrific adventure
Reviewed in the United States 🇺🇸 on April 1, 2017
Verified Purchase
Great story, exceeded my expectations which were pretty high as i really love almost all the characters and appreciate the wildly imaginative story humor and often hilarious dialogue. Wish Claver was used more and better but loved having more about other characters like Harris Sargon and even the weasel windlass. Glad we had less turov who was often annoying in prior outtings. James is one of my fav characters ever and he is actually even more engaging as a higher ranking officer. Battles including training were very well portrayed. Larson is to be congratulated on another difficult to put down read. I almost reread books but finding enjoy these enough and they contain enough twists to make it a worthwhile option. Can't wait till next book.
Read more
2 people found this helpful
Helpful
Report abuse

Patrick O'Sullivan
5.0 out of 5 stars He's back
Reviewed in the United States 🇺🇸 on May 4, 2017
Verified Purchase
Sensational! James McGill is back with a vengeance.

If you like a read that is a little like something like Lee Child would pen if he wrote a sci fi novel, this is for you.

James McGill is a larger than life character with many flaws whose physical presence belies an acute, unconventional mind.

Throw in a few romances, one with an alien, and more than a few puzzles for both the reader and the characters and this is a fun book.

Sure it's not Tolstoy, but Tolstoy is overrated when you're looking for some fun, easy reading.

In my humble opinion any book by Mr Larson is a must read. Buy this book. Treat yourself!
Read more
Helpful
Report abuse
See all reviews

Ed.F
5.0 out of 5 stars Extremely enjoyable future neo-pulp sci-fi classic
Reviewed in the United Kingdom 🇬🇧 on August 30, 2017
Verified Purchase
I know this is a pulp sci-fi series but i really enjoy it, it's old school daring do with a faux hint of cynical world weariness pretending to cover an honest sense of good fun and a pean to the supremacy of the narrative which triumphs over overly fussy characterisation. Greatly enjoyable and not in the least taxing, perfect reading for commuting or on the plan. Bravo!
Read more
Report abuse

Alan C
4.0 out of 5 stars Love this series!
Reviewed in the United Kingdom 🇬🇧 on April 27, 2017
Verified Purchase
Cracking series of books always keeps me guessing where the author will take the characters. I love in this book that we start to hear and find out more about the galactics it moves the story on nicely! Id love to see a glimpse of the core worlds in the next books or maybe one of the races in the core worlds giving the galactics so much trouble!
Read more
Report abuse

Pete in Shropshire
5.0 out of 5 stars McGill lives on !!!!!
Reviewed in the United Kingdom 🇬🇧 on October 2, 2017
Verified Purchase
AND about time too. It seems like two years since Home World was published - maybe it was. A thoroughly enjoyable book and I hope that McGill pulls his finger out and the next book in the series will not be too far down the line.
Read more
Report abuse

Phillicomm
5.0 out of 5 stars James McGill is back !
Reviewed in the United Kingdom 🇬🇧 on June 19, 2017
Verified Purchase
Really enjoyed this book. Love the series !
James McGill, as usual, gets promoted, is promiscuous, makes dodgy decisions, kills aliens & people, is often at the cusp of being "permed" or getting his whole species made extinct & dies and is resurrected.
Great stuff !
Read more
Report abuse

Steve
5.0 out of 5 stars Another cracker
Reviewed in the United Kingdom 🇬🇧 on April 11, 2017
Verified Purchase
Loved it, loved it, loved it. What a great character, please keep em coming. If you enjoyed the previous novels this is more of the same so what's not to like. Let's head to the core worlds soon though and kick some ???
Read more
Report abuse
See all reviews