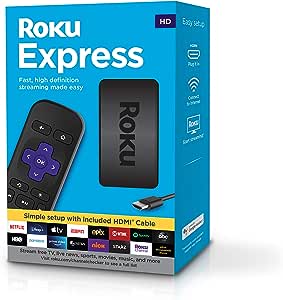 Add to Cart
$30.00
& FREE Shipping on eligible orders. Details
Sold by: Unique Techs
Have one to sell?
Sell on Amazon

Visit the Roku Store
4.8 out of 5 stars 58,161 ratings
| 1000+ answered questions
Available at a lower price from other sellers that may not offer free Prime shipping.

Buy this product as Renewed and save $4.05 off the current New price.

Do I have to pay an activation fee?

No. Roku players do not require an activation fee, registration fee, equipment rental fee, or charge for support of any kind.

Do you need a smart TV to use it?

No. Roku Express can be connected to any TV with an HDMI connection. Just plug it into power and connect it to your TV with the included High Speed HDMI Cable. Remember, to enjoy HD entertainment, you’ll need a compatible TV.

Can I get local channels?

Several free channels offer live and on-demand local newscasts and clips. With a subscription, services like Hulu + Live TV, Sling TV, and YouTube TV deliver channels in select markets. You may also The Roku Channel to search for local affiliates.

Can I use this with my existing Roku Streaming Stick+ and remote?

Yes, you can set up your Roku Express and Roku Streaming Stick+ on separate devices. Multiple players can be linked to one Roku account, or you can link each one to a different account. However, you cannot use multiple streaming players on one TV.

Can I watch TV in Spanish?

Yes. In addition to six Spanish language channels on The Roku Channel, the “Spanish Zone” featured in search curates Spanish language entertainment across the Roku platform in browsable rows such as new releases, free titles, rentals, and more.

Roku Express Streaming Media Player delivers a smooth HD streaming experience on your TV at our best price. It’s easy to get started—just plug it into your TV with the included High Speed HDMI Cable and connect to the internet. With a short step by step setup and an easy on screen experience, Roku Express Media Player is perfect for new users, but powerful enough for seasoned pros. Stream what you love, including live TV, news, sports, hit movies, popular shows, and more. Plus, with access to hundreds of free channels, there’s plenty to enjoy without spending extra. It’s easy to stream what you love and cut back on cable TV bills with access to 500,000+ movies and TV episodes across thousands of free channels. Enjoy free TV channels: Stream live TV, 24/7 news, sports, movies, shows, and more on The Roku Channel, plus a huge collection of free entertainment from top channels on Featured Free. The free Roku mobile app turns your iOS or Android device into the ultimate streaming companion; control your Roku Express Media Player, use voice search, enjoy private listening, and more on iOS and Android . Automatic software updates.

4.8 out of 5 stars
4.8 out of 5
58,161 global ratings
How are ratings calculated?
To calculate the overall star rating and percentage breakdown by star, we don’t use a simple average. Instead, our system considers things like how recent a review is and if the reviewer bought the item on Amazon. It also analyzes reviews to verify trustworthiness.

Rose Dawson
5.0 out of 5 stars Do not pay an activation fee!
Reviewed in the United States on November 1, 2019
Verified Purchase
We now have three of these devices in our home to help save on our cable bill. We use them for the spectrum app and they work great! Very easy to set up. A word to the wise - I read a couple of reviews about an activation fee. I set two of these up today and there is no activation fee!! If you are being asked to pay a fee you are in the wrong place! Do not google the set up website - type in the address as it is when prompted on the screen and you will be fine.
Read more
1,638 people found this helpful
Helpful
Comment Report abuse

Mike T
5.0 out of 5 stars Should have got one years ago
Reviewed in the United States on October 16, 2019
Verified Purchase
I finally decided to buy one to help keep my TV relevant. Most of the apps from my 2011 model TV don't work anymore and was limited in functionality. I wish I bought one of these years ago though. Now, reading through previous comments, there is someone who gave 2 stars and complained about being single banded WiFi. This guy doesn't pay attention to what hes looking at. Yes, this is clearly stated that it only uses 2.4GHz band. No, they didn't go backwards in any form with this. With a quick search, and all Roku Expresses, which is what this is, have been single band. And 2.4GHz is fine when only going 1080p for HD.

Now about using it. Setting everything up doesn't take long, around 10-15 minutes. Once you have it set up, it's eay to use to get on Netflix, or Amazon Prime to watch your favorite shows. You can also download some other apps to get some free TV to you flip through another couple hundred channels and complain about there is nothing to watch, because we all know we do that. When watching something, the picture does take a minute to download, buffer, and catch up, so the first little bit may be a bit blurry, but it evens out. There is also the Roku app for your phone, and this adds some ease of use. Instead of using the remote to attempt to hit the sensor on the device, you can connect to the Roku on your phone as long as they are on the same WiFi network.

If you want to stream easier on your TV, or your TV doesn't have the Smart features you want, I would recommend this. If you want 4K video, then you need to look at something else because this doesn't off it. Also, if you really need to use 5GHz WiFi, then also, look elsewhere. Now, I can't compare this to other models, but this works well for what I wanted it for. Would recommend.

mike
1.0 out of 5 stars Beware of Activation Fee
Reviewed in the United States on October 26, 2019
Verified Purchase
I had to return it today though I only had it for 1 day or so. Reason: There's activation fee of $100, which was not specified on the webpage when I made the purchase. Based on the description on the webpage, I was under the impression that I just have to pay for the device & get all the free channels I want. It described that I only have to pay for the channels that were not free. However, when I finally got a chance to install the device on my TV & tried to activate it using the code on the TV screen, it told me that it failed. I called the support phone# & was told by someone with heavy accent who rudely rambled on & on about all kinds of benefits of activating the device WITHOUT giving me a chance to talk. After he was done advertising for his company's product, he finally said it would cost me $100 to create an account in order to activate it. He told me also before I hung up the phone that if I decide to pay to create an account, I'd have to call Monday (it was Saturday when I called). This might have been a good product, but the company should've made buyers aware upfront of the activation fee. In all, I was totally disappointed.
Read more
541 people found this helpful
Helpful
Comment Report abuse

DavyMac
4.0 out of 5 stars HDMI switch/splitter users BEWARE!
Reviewed in the United States on October 16, 2019
Verified Purchase
Overall, was I eventually moderately satisfied. The initial setup was a breeze. However, I got a rude shock when the video from a lot of channels wouldn't stream - instead of video, I got only sound and error code 020. (Of note, I was trying to run our Roku through an HDMI signal switch.)

As it turns out, a lot of HDMI signal switches/splitters sold on Amazon are NOT HDCP compatible. (HDCP is a form of digital copy protection; I only learned about this when trying to troubleshoot this Roku). A lot of channels available on the Roku use HDCP. So, as a result, content from those channels could not be streamed from the Roku to our TV through our HDMI switch/splitter. It took some Googling to figure this out - the Roku support article regarding HDCP error messages mostly discussed unplugging and replugging things, and turning things on and off again. It did not mention HDMI signal switch/splitter incompatibility. I would have been up and running more quickly, and ultimately more satisfied, if that had been the case.

After figuring this out, I plugged the Roku directly into the TV, and it worked perfectly. Unfortunately, I had to rearrange all of our other HDMI inputs in order to do this.

If you are reliant on HDMI switches/splitters, figure out if your switch is HDCP compatible before getting this incarnation of Roku.

Also, it is advertised that the Roku mobile app has a keyboard function - on my iOS, the the mobile remote control functions that I've tried work, with the exception of the mobile keyboard. Hopefully a Google search will yield a fix, but I would be even more satisfied if this keyboard feature worked right out of the box.

The remote control stopped working after a month. It's a good thing there is a mobile Roku app. Otherwise, we'd have to order a new remote.