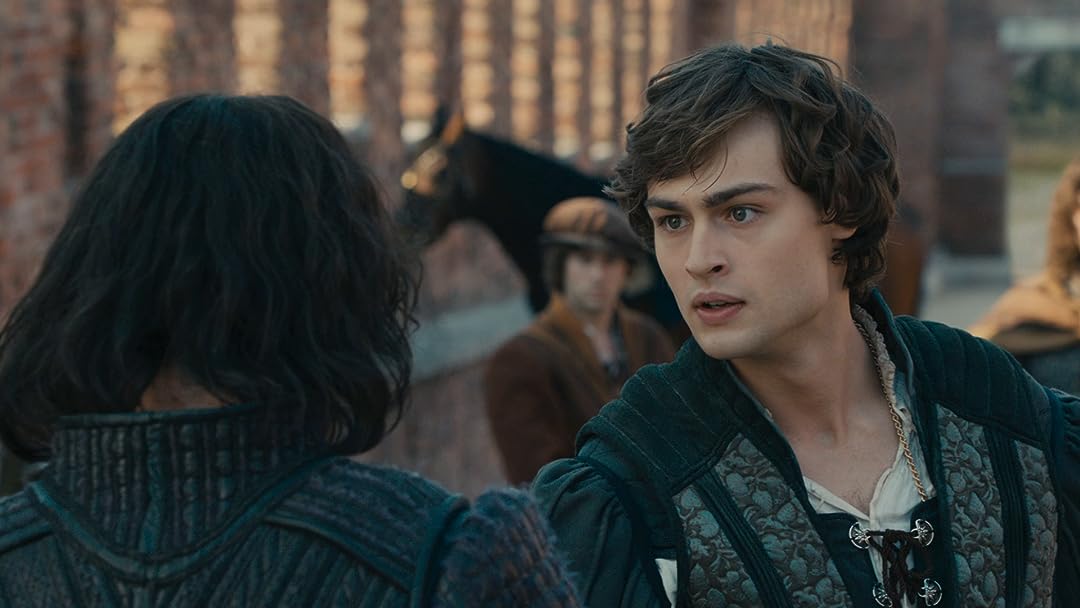 (931)
1 h 58 min2013X-Ray13+
Shakespeare's epic romance is revitalized by Downton Abbey writer, Julian Fellowes, and The Flight of the Innocent director, Carlos Carlei. With an all-star cast that includes Hailee Steinfeld, Douglas Booth, Damian Lewis, and Paul Giamatti, it gives a new generation the chance to fall in love with the enduring legend of Romeo and Juliet. Every generation deserves to discover this classic story.

BardgalReviewed in the United States on May 4, 2016
1.0 out of 5 stars
Unbearably bad
Verified purchase
As a Shakespeare professor, I was interested in seeing this production, because I'd heard that it was beautifully filmed (in Verona, no less) and produced. Sadly, I had to turn it off after fifteen minutes (and even that was through gritted teeth) because I found it completely unwatchable. Although the film advertises itself as being a faithful depiction of Shakespeare's play and language, it actually dumbs down the language and re-writes or even invents whole passages. I am by no means a prissy "purist" when it comes to productions of Shakespeare's plays; I love the Baz Luhrmann version of R&J (though my heart will always belong to the Zeffirelli), and I love many contemporary interpretations of other plays as well. But I can't stand it when the plays are "modernized" to make them more "accessible" to audiences. In the hands of a thoughtful director and strong actors, Shakespeare is accessible in the original and a lot more enjoyable than some dumbed down production. (Substituting "yes" for "aye" so that viewers don't get confused? Seriously?) Stick with the Luhrmann or the Zeffirelli versions for now, and do your best to support local theater companies in your community that are working hard to present live theater Shakespeare.
99 people found this helpful

BritneyLynnReviewed in the United States on July 10, 2019
5.0 out of 5 stars
9th Graders loved this version
Verified purchase
I teach Romeo and Juliet to my students and I really dislike the Leonardo DiCaprio version. This one is pretty spot on. They still speak in Shakespearean language but they do so in much shorter speeches and it is more understandable for students. I think there were 2 instances where the book diverges from the movie ( in Act 4 the nurse almost seems to have her own crush on Romeo which isn't consistent with the book and also in Act 5 Benvolio is the one who tells Romeo about Juliet being carried to the tomb) other than these two minor things which we discussed in class the students really connected with this version.
12 people found this helpful

A readerReviewed in the United States on June 25, 2016
4.0 out of 5 stars
A decent production of this timeless classic
Verified purchase
It is always interesting to see what each new production of this timeless classic will do to make it unique. Some recent examples over the past couple of decades have been highly regrettable if not downright offensive, but this performance here is respectable and entertaining, if not quite stellar.

The unique master stroke of this production is probably the language. The screenwriters have rewritten some of the more difficult passages of Shakespeare's language into contemporary usage to make the action easier to follow. At the same time, the beauty and power of the original language has been retained. This requires no small degree of scholarship, which the typical viewer may or may not appreciate. But to a Shakespeare fan like me, it demonstrates a real command of the Bard's cadences and imagery.

Other highlights: Some of the acting is outstanding. Paul Giamatti turns in a powerful, nuanced performance as Friar Lawrence. He is a master of the small, telling gesture. Damian Lewis is equally commanding as Lord Capulet, by turns passionate and childlike, enraged and capricious. The costumes, sets and music are beautifully rendered. It's a gorgeous film to watch. In addition, there are small tweaks to the plot twists that make the storyline more accessible to modern viewers.

Some weaknesses: The delivery by the two leads of some of the most memorable lines from this play is disappointingly lackluster and dry. This is especially true of Douglas Booth, who is stunningly beautiful to look at but lacks the vocal quality and the dramatic artistry to bring his Romeo to life. There is little chemistry between Romeo and Hailee Steinfeld's Juliet until we are more than halfway through the film, at which point her performance does improve. And their wedding night scene is one of the most beautiful, tasteful and tender love scenes I have ever seen on screen. But for a story whose drama depends entirely on the combustible passion between its two main characters, their performance is unsatisfyingly limp.

That said, I have watched this film twice now and enjoyed it both times as an interesting take on one of my all-time favorites. For me, nothing will ever match the sheer emotional intensity and power of the 1968 Franco Zeffirelli production of Romeo & Juliet. But this one is interesting enough to be worth adding to my collection.

Meredith FolsomReviewed in the United States on March 14, 2021
5.0 out of 5 stars
Fabulous locations, interesting faces
Verified purchase
I bought this DVD because it gave a close up of some truly beautiful and significant locations, the Farnese Palace for one. I'm still trying to find out where the Romeo/Juliet tomb is located. Is that Giotto on the walls? The tower is familiar from either Kenneth Clark "Civilisation" or James Burke ""The Day the Universe Changed." The Farnese Palace came to my attention from Ron Chernow's "The House of Morgan," and J. P. Morgan's purchase of decorations from the Chigi Palace. As to the interesting faces I include Nurse and the Messenger of the invitation that Romeo reads (its hard to figure out is that Servant 1 or Servant 2 from IMDb. ) Natasha McElhone is ever beautiful and young Booth is a true beauty. It will be interesting to see what he does with his career. Will he take the route of Tom Hardy and do bizarre movies to escape the pretty boy trap?
One person found this helpful

Ali SReviewed in the United States on February 26, 2015
3.0 out of 5 stars
Thought it would be better and more authentic like the 1968 version
Verified purchase
While I appreciate the more "modern" version for today's audience with known actors, it's too bad that this story doesn't follow Shakepeare's lines accurately. My students were entertained, but we all preferred the 1968 version better, despite how old it is. It is much more authentic, and doesn't rush through the scenes. The fight in the marketplace was rushed, the Prince's speech (which is a good one), was changed, and Romeo's lines that are normally in the balcony scene, were at the party. I felt like this one was rushed...and didn't honor Shakespeare's work very well.
32 people found this helpful

EmReviewed in the United States on April 28, 2019
1.0 out of 5 stars
Awful
Verified purchase
I was really looking forward to this movie and hoped to be able to show my students a more updated version than the Zeffirelli version from decades ago. But this was just horrible. They completely butchered Shakespeare’s language (which is easily understandable if performed correctly), scenes were added that were not in the original story, while others were left out or cut short. And the whole thing completely lacked emotion. If you’re going to adapt Shakespeare you either have to follow it completely or change it completely (like west side story). Even the Leonardo DiCaprio version did a better job than this.
4 people found this helpful

C. JonesReviewed in the United States on September 8, 2021
1.0 out of 5 stars
HORRIBLE
Verified purchase
O where to begin! I, like many, have seen "different" versions of this--Norma Shearer and Leslie Howard!--and suspended disbelief for love of the text. I know it almost by heart having listened to a cassette of the Zeffirelli version so many times I wore it out. I trust Leo to give an honest performance, so I took a chance on Luhrmann's film and was impressed.
But this thing? Will (or whoever really wrote the plays) has gotta be rolling in his grave. What on earth is the benefit of bastardizing the poetry--Juliet races through her balcony monologue and does not even appear to know that "wherefore" means "why".
This is when I pulled the plug and don't get me started on our so-called Romeo. Talk about mis-casting--any number of other sweet-faced Montagues would have done, but this guy looked like a stalker. *shudder*
Lastly, I was introduced to this play by my freshman English teacher, who lead us gently through the journey, explained where needed, had us read bits out loud and finally, towards the end, became tearful. As one ought in the face of such tragedy.

Robert McDowellReviewed in the United States on March 23, 2020
4.0 out of 5 stars
Steinfeld &???
Verified purchase
I will happily watch anything featuring Hailee Steinfeld. She is such a talented young actress and singer/songwriter who has obviously benefited from superb parental guidance and a tight-knit family. In many ways, she was born to play Juliet. It's hard to say if she wasn't quite ready for the role here, or if the script and direction did her few favors. The script alterations are a major letdown in this version and there isn't a lot of chemistry between Haiz and the model who plays Romeo. Visually, the film is lovely to look at and Hailee contributes to that in every scene in which she appears. Supporting roles were well cast and performed. The music was troublesome. Perhaps inevitably, the film suffers by comparison to the Zefferelli masterpiece. In that version, the chemistry and energy are white-hot. Haiz gets a better script in The Edge of Seventeen and knocks that one out of the park. She's a joy and a delight to watch and listen to. Long may she find good roles! Keep writing & singing!
See all reviews
Back to top
Get to Know Us
Make Money with Us
Amazon Payment Products
Let Us Help You
EnglishChoose a language for shopping. United StatesChoose a country/region for shopping.
© 1996-2022, Amazon.com, Inc. or its affiliates