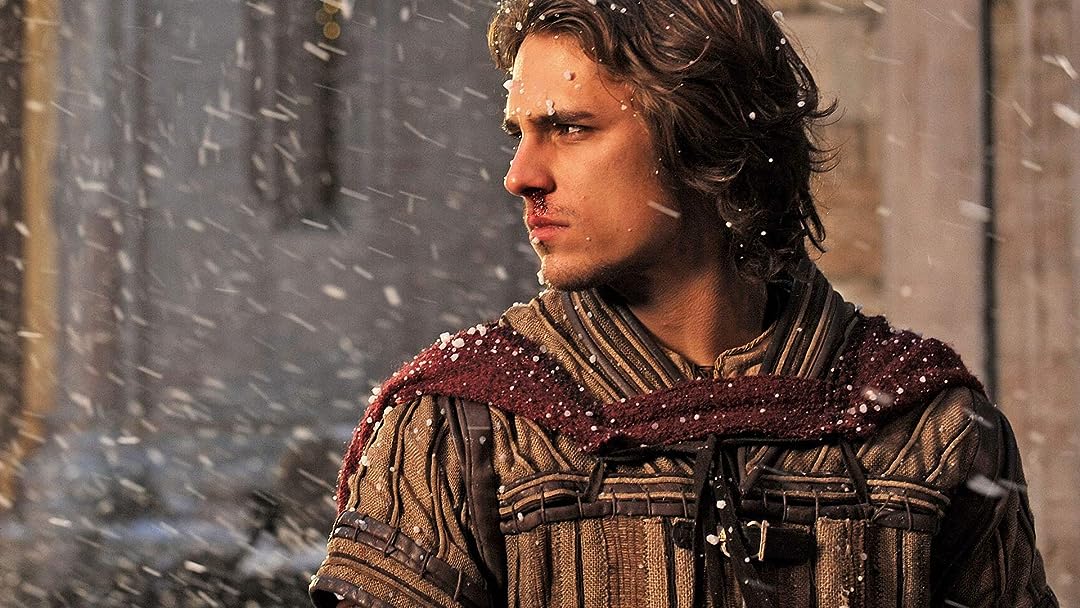 G.C.Reviewed in the United States on October 17, 2020
5.0 out of 5 stars
Beautiful!
Verified purchase
Sad to say that I actually enjoy this version a helluva lot more than the other three that we have in the U.S.
2 people found this helpful

cinestReviewed in the United States on August 6, 2020
1.0 out of 5 stars
I had to stop watching it (at least for now)
Just so everyone knows, I only watched the first few minutes, then stopped.
If the creators decided to invent something they must do it with extreme caution or call their creation something else but R & J. Also, these inventions must make sense rather than being nonsensical.
Here the story begins with Montague attacking a road convoy belonging to Capulet in the countryside. What? Montague were not a street gang or bandits. Animosity coupled with duels is an explosive combination but it is a far cry from being criminals attacking another noble family in the countryside.
Anyway, I'm just not sure I want to subject myself to other inventions by this crew.

J. SmithReviewed in the United States on November 16, 2018
5.0 out of 5 stars
A fine adaptation of the greatest love story ever told
This retelling of Shakespeare's tragic tale is an excellent adaption which makes the classic accessible to modern audiences who might have difficulty with Shakespearian English. While Shakespeare "purists" might not appreciate the occasional liberties, it is nonetheless a pretty faithful recreation. It is important to remember that, unlike modern literature, this story was not crafted and printed in one sitting. There is no true original version as it has been added to and changed over many centuries. This is simply another interpretation of the work, and a good one at that.

The production quality was top notch and the casting was inspired - particularly the breathtaking performance of Mastronardi as Juliet. While the definitive 1968 Olivia Hussey version and the Leonardo DiCaprio version were much more popular, I consider this far superior.
12 people found this helpful

Victoria R.RemingtonReviewed in the United States on February 17, 2021
5.0 out of 5 stars
Such a beautiful adaptation of this film
This was the most beautiful adaptations of this film that I have ever seen, and it talks about the rest of the family members that I've never heard about in the other movie adaptations,like the siblings Ursula and Antonio,theirs was just as tragic as Romeo and Juliet's ,because they both lost a sibling,and I know the feeling I have lost 2 sisters,and this is so heart wrenching,and I also loved the nurse,and she was more of mother to Juliet then her own mother was,and you get to here the nurse's story which is sad to,and she tries to caution Juliet not to make the same mistakes in life that she did,while her own parents only cared about the money they got from this marriage they were trying to force on her.

And while I do love the other versions the last one they did with Douglas Booth and Hailee Steinfeld they made it look like it played out all in one day?

But in this version it takes place over 2 weeks which makes more sense.

And while they did take a few liberties with the film like Juliet telling her parents about the marriage before she died, well I always thought that they found after she died.

But it was a desperate cry for help,and what a tragic end it had to be to finally put an end a feud between these 2 families over something long,long ago that nobody could even remember what it was about.

But it just to goes to show that violence,is not an answer and parents should listen to their children,but like the priest said they were taught only violence and that's the only way they thought was a way out.
One person found this helpful

Rosemarie GuzmanReviewed in the United States on September 8, 2019
5.0 out of 5 stars
A DIFFERENT TAKE ON THIS STORY OF LOVE AND TRAGEDY
I have seen all of the Romeo and Juliet movies....This version does add a few elements that are not original to the original script...But why should that be a problem? Have we not seen the same thing done over and over again? I HIGHLY recommend this movie for those with an open mind....If you want to see the same exact story told precisely the same, word for word then this movie might not be for you....The acting was great....I especially loved Mercutio...He made me swoon...I totally fell in love with the character...He was such a badazz and in my opinion the BEST version of Mercutio that I have ever seen in a Romeo and Juliet movie...Ken Duken did a great job as playing Mercutio by far....And OMG he is just so HOT!!!!! I feel if Romeo hadn't stepped in the fight between Mercutio and Tybalt that Mercutio would have won the fight because he was just that BAD AZZ in this movie!!!!!!!!!! Of course Romeo was handsome....The actress playing Juliet was beautiful...Even the actress who played her nurse was beautiful....Lady Capulet did a great job at making me want to beat her azz...She was such a cold hearted bytch....If you want a different spin on this classic tale of tragic love, which pretty much ends the same either way, then I say check it out....Side note I have watched this version more times than I can count and though it will always end the same I can't help but weep at the end each time....A great movie does NOT have to star A list celebrities to make it a beautiful....So if you have an open mind then check this out...Some may not like it but that does not mean you won't.....
3 people found this helpful

GottaDoSumptinReviewed in the United States on April 25, 2021
3.0 out of 5 stars
A Grittier, Mature, Version of The Tragic Teen Romance
A grittier, more mature, version of Shakespeare’s teenage romance. The opening credits state that this miniseries was a “story inspired by William Shakespeare’s play”; meaning, it loosely follows the basic storyline, then uses poetic license to flesh it out and make it more theatrical and dramatic. The miniseries examined the violent feud between the Montagues and Capulets more than I’ve seen in other versions. There’s more action than romance.

This miniseries was satisfactory, but nothing to rave about; although it was translated into an English I can understand. I think the actor who played Mercutio was a real scene-stealer whenever he appeared, even upstaging Romeo. The snowscapes are beautiful, at the same time, melancholy.

However, I prefer the more lavish Franco Zeffirelli 1968 version for the naiveté of the two main characters. A side note: the music for the miniseries sounds eerily similar to the love theme of the Zeffirelli version – “A Time For Us” (to my ear anyway).

Jessica WoodburnReviewed in the United States on December 23, 2018
4.0 out of 5 stars
Cleverly Adapted
I have been a big fan of this love story for many years. I have watched almost all the versions and can recite nearly all the play's lines by heart. This version was very well done, despite not using Shakespearean verse. It explores the basic premise with additional details that make the storyline interesting.

I like how it was set in the winter and stretched out the days before their tragic deaths occurred. The star-crossed lovers were open with their families about their romance, but were sadly dismissed. Characters were well-developed and the acting genuine.

The only reason for 4 stars is because I still believe Romeo should have died before Juliet awoke (as the original plot indicates). That is really what makes it tragedy. Everything else that was redesigned and structured for the movie works but this did not.

I would go on, but I say check it out and see for yourself! If this ever came out on DVD, I would certainly purchase it to add to my Shakespearean and love story collection.
6 people found this helpful

JWReviewed in the United States on June 15, 2019
4.0 out of 5 stars
An impactful rendition
Overall, this is an enthralling adaptation of Romeo and Juliet. But there are a couple drawbacks: First, the narration by Romeo's brother is unnecessary -- he doesn't have much screen time, and that made it difficult for me to connect with him during the narration. Second, some of the acting felt stilted initially. On the plus side: As the show went on, the acting began to feel more natural; the cinematography, music, directing, and build up to the climax are exquisite; and the lead couple is gorgeous. In short, I loved it, despite the drawbacks.
2 people found this helpful
See all reviews
Back to top
Get to Know Us
Make Money with Us
Amazon Payment Products
Let Us Help You
EnglishChoose a language for shopping. United StatesChoose a country/region for shopping.
© 1996-2022, Amazon.com, Inc. or its affiliates