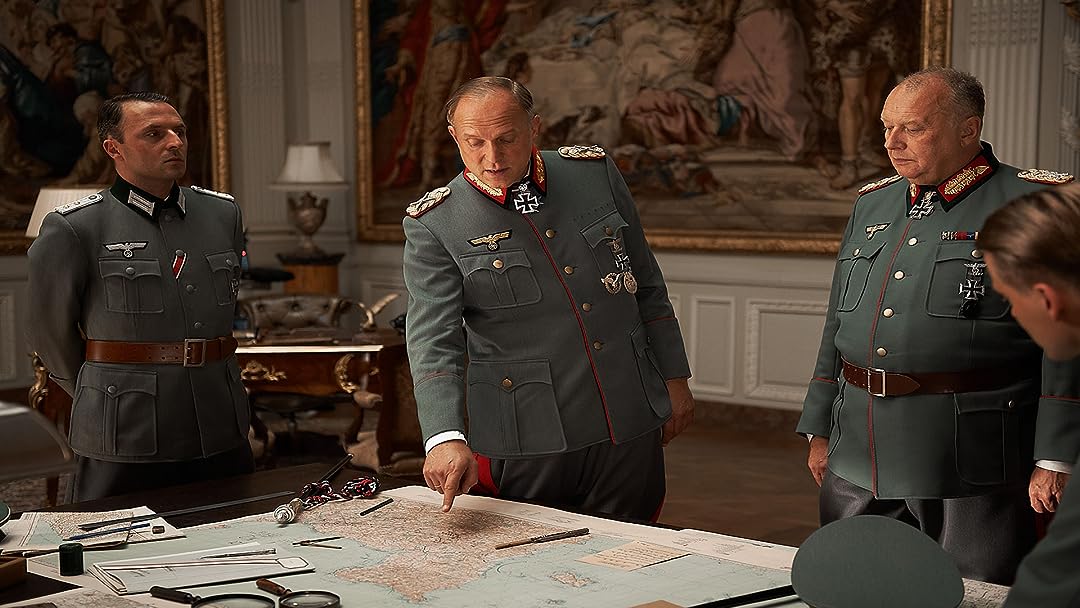 (339)1 h 58 min2017X-Ray16+
'Rommel' recounts the futile efforts of the Field Marshal Erwin Marshall to gain Hitler's backing for the Western Front. Faced with Hitler's rigid hope of fulfilling a final victory combined with increasingly absurd military orders, Rommel attempts to fulfill his duty to his country

daniel famReviewed in the United States on October 24, 2017
3.0 out of 5 stars
Get the Subtitles Working and It's Excellent
Verified purchase
The English subtitles displayed without a problem both when I streamed the film on television and on my computer. They are there, so if you don't see them, you can probably find a way to get them to show up on your device. The German is very fast and nuanced, spoken by excellent German actors, of course, whose primary concern is to portray the characters, and not necessarily to be understood by Americans and other English speakers who had two years of German in high school :-). So if you're one of those, as I am, figure out how to get the subtitles working before you settle in! As far as the movies goes, alll the performances are solid. The filmmaking is good, if a bit static at times. The costumes are great. This film is about Rommel's final days and doesn't show any of the campaign in North Africa, which was his famous moment as a commander, of course, and where he got the name The Desert Fox. It really should be titled Rommel's Final Days or something like that, to be accurate. Tukur's Rommel is very understated and intelligent. Silberschneider's Hitler is an interesting take, much less rabid and mouth-foaming than many others, but equally evil and stubborn. Hans Kremer has a wondeful cameo as the old, beaten down, but still fighting General Marks. But the actor who nearly steals the movie with his excellent performance is Benjamin Sadler as Rommel's General Speidel. Historically, Hans Speidel was part of the Valkyrie plot to kill Hitler, and you almost want to forget how it actually turned out and believe he might succeed . . .
37 people found this helpful

Jed- Henry WitkowskiReviewed in the United States on December 10, 2017
5.0 out of 5 stars
Way better than I expected
Verified purchase
I am still watching it.

Way better than I expected. What I expected was some degree of obvious Anglo/American propaganda, so far, I have not seen any of that. The equipment in use is pretty accurate, except for one seen on the beach during preparation for the invasion, there was a US military trailer that came about during Korea, however only part of it was visible and it is likely it was first used during WWII. (The US military tends to get attached to styles, for example, my dad who served in the earlier 90's was issued boots that were the same style of those worn by my great uncle while in the Korean War as an Airman.) Also, both sides were known to utilize captured gear, mainly vehicles and vehicle accessories.

There is also a scene in which the headlights are causing a reflection on the camera lens. other than the accuracy of timelines, battles, gear, and personnel is good! And, the use of actual German actors is great! As an American, seeing Adolph portrayed as something other than a raven lunatic is kind of weird, though seeing him as more normal lends credibility to the storyline, though I think he's portrayed as too quick agree with his JCOS (I know, that is not the acronym for it in Deutsch) though portraying him as an artist is correct, as is the mule-headed man he was (Germans, mule Headed?! what a shocker) So are us Poles. Anyway, I think it is an excellent, though slightly simplified movie! And again, I am not quite done watching it.

Corey A. StewartReviewed in the United States on February 12, 2019
1.0 out of 5 stars
Anti-American film.
Verified purchase
The film wrongly portrays D-Day as a British-led battle, completely ignoring—and disrespecting—the 125,000 American casualties. This film is a slap in the face to the thousands of Americans who died in Europe to liberate Europeans.
21 people found this helpful

ilbobReviewed in the United States on November 26, 2017
5.0 out of 5 stars
Much better than I anticipated
Verified purchase
This is really only about Rommels last year of life. It's a surprising a good story about how an honorable man tried to fulfill his duty. In the end I think there really was no way for him to fulfill his duty and he kind of let events overtake him. The characters are believable the costumes look real. It's in German but the version I saw on Amazon Prime had good subtitles that were easy to read. I don't think the subtitles took anything away from the basic movie.
23 people found this helpful

Russell FanelliReviewed in the United States on September 27, 2019
5.0 out of 5 stars
Rommel's last year.
Verified purchase
Erwin Rommel, the Desert Fox, was a Field Marshal in the German army who did his best to win the war for Germany and failed. This excellent German film tells his story and it feels like the producers and director did their best to accurately portray Rommel and still be entertaining. I can't vouch for the accuracy of the film, but I can say that I was genuinely entertained by Rommel's sad story.

The film has German subtitles and this was a problem for my wife, who complained that it was difficult to keep up with the fast paced dialogue. I am a fast reader and I must admit that sometimes I didn't get everything that was said. For me that problem was less important than the quality of the production and acting in this film, both outstanding. Also, the filmmakers from time to time use actual war footage, which is impressive.

Rommel is not a documentary, but the director's version of Rommel's last year of life. I am certain historians will not be happy with the liberties the director has taken in portraying Rommel and the events that ended his life. The purpose of the film is to show that Rommel is a true hero of the German people who remained true to a lost cause. It appears that even his enemies respected Rommel the man, who was clearly on the wrong side. Rommel learned too late the mistake he had made and it killed him.
7 people found this helpful

amazon customerReviewed in the United States on May 29, 2019
3.0 out of 5 stars
Wish they had dubbed it in English
Verified purchase
This shows Rommel from the Rommel point of view. He is portrayed as a strong military strategist, who questioned Hitler. Although the film shows him as not going along with the plan to kill the head of Germany, I find it hard to believe that he didn't agree with it. It did give some insight to the characters and how the D-Day was handled, plus the attempt on Hitlers life later. The film had more acting than action, so if you like battle scenes, look elsewhere. Plus trying to read the subtitles slows the movie down, because I had to go back to read statements which came by so fast.
8 people found this helpful

Simeon 'Sam' HoveyReviewed in the United States on July 14, 2019
3.0 out of 5 stars
Rommel -- The DVD
Verified purchase
The DVD that I got is in German with English subtitles although I suppose it was shipped by mistake but I have no plans to return it since I sprechen Deutsche. Although I do at times find the rendering into American colloquialisms to be amusing.

It might be easy to think the producers, being German, would want to rebrand (white wash) Rommel; however, based on what I have read I think this is a reasonably accurate depiction of the last 7 months of his life and IMHO I think they are doing a good job in getting the history right and particularly in comparison to Hollywood productions.

At first when the July 20 plotters approach Rommel he is wholly opposed to any kind of attempt on either der Fuhrer's life or a change in government. But as the war turns against Germany in France (and on the eastern front) he becomes open to the idea of a political solution such as the arrest and trial of Hitler but never expresses any willingness to do anything to make this happen.

Finally, the real Rommel was a relatively thin man and even in period newsreels some of his charisma comes through. So whey they chose this over weight actor to portray Rommel as someone who seems to have very little to do with fighting the war in the west is beyond my understanding. It almost seems that this Rommel cares as much about taking care of his dog as he did fighting the war.

However, the film still gets most of the history and events done pretty well for a movie so it is worth watching.
2 people found this helpful

paulReviewed in the United States on May 13, 2021
4.0 out of 5 stars
Great movie in German with some history "sanitization" attempts
Verified purchase
This movie tells us that someone as high up as Rommel ,a Hitler fav, by the yr 1944 had only heard rumors of what had been happening to the jews right in front of their eyes for 10+ yrs is a myth. Movie also portrays the German army as this almost benevolent force just doing their duty unlike the fanatical SS. Doubt most of Europe made that distinction.LOL

Hitler wrote Mein Kampf a bestseller in the 20's where he didn't pull any punches with what he was planning to do to Jews who were transported by rail car on their way to death camps. If you know anything of Europe train travel is how most travel with stations located everywhere even today. Any German saying in the yr 1944 they'd only heard "rumors" was full of it.
One person found this helpful
See all reviews
Back to top
Get to Know Us
Make Money with Us
Amazon Payment Products
Let Us Help You
EnglishChoose a language for shopping. United StatesChoose a country/region for shopping.
© 1996-2021, Amazon.com, Inc. or its affiliates