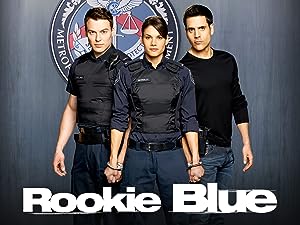 (682)
7.72015X-Ray13+
Season Five begins with two lives hanging in the balance. Officers Sam Swarek and Chloe Price have been shot in the line of duty, and both are in critical care at Memorial Hospital. But life at 15 Division must go on.

BuddyReviewed in the United States on March 13, 2015
5.0 out of 5 stars
It's good, watch it!
Verified purchase
If you like cop shows you will probably like Rookie Blue. It's not a procedural but it is about cops. Even if you don't particularly like cop shows you may still like it because this is really a character driven show. It's about the characters, their lives, relationships, challenges and struggles. They just happen to be cops so most of the show takes place in that world, because that's who they are.

Now, I have watched every episode through season 5. I would strongly recommend that anyone interested in this show do the same. For one thing, the show is taking you through the progressions of these characters from new, inexperienced, green, in-over-their-heads rookies to seasoned police officers. Also, and not to be underestimated, is the background on the characters. If you pick up later in the story you miss the significance of events and of the characters' personalities, choices and the sources of their struggles.

It's a good show with some great characters. The plot is interesting without being absurd or unbelievable. The acting and directing are so good that they NEVER stick out and that is a huge compliment. You are in the show never being cognizant that you are watching a production.

BobbiReviewed in the United States on October 8, 2015
5.0 out of 5 stars
ROOKIE BLUE, SEASON 5, now comes in Vol 1 (only has 3 disks)
Verified purchase
I have watched Rookie Blue from the beginning. When I first ordered Season 5,it was not marked Vol 1. When I received it, it was Season 5-Vol 1. It has only 3 disks. I feel like I have been ripped off; all of my others disks are the norm with 5 disks. Its too bad that who ever puts the product together, feels its time to rip of customers for the fantastic show. It appears we now have to buy the season in volume numbers? And this Vol 1 package does not say it has 3 disks, you need to open your package, then, SURPRISE!!!. I am so disappointed in Amazon for this not so truthful information of what Vol 1 represents. And guess what, it was almost $30.00 for the 3 disk. Bit expensive. Curious, when is Vol 2 suppose to be ready, how many disks? will it complete Season 5????????
One person found this helpful

Mary HodgettReviewed in the United States on January 16, 2020
5.0 out of 5 stars
I love Rookie Blue!
Verified purchase
I've been a fan since the show first came out on TV. I own the first five seasons on DVD and will buy season six if it ever becomes available on Amazon. The characters are likable and the stories are always interesting. It's fun to take these DVD's off the shelf and start watching again from the beginning.

Gloria J. GreenReviewed in the United States on August 28, 2015
5.0 out of 5 stars
Rookie Blue One of the Best Series on TV!
Verified purchase
Love this show and have ever since day one! After reading the review by W. Lewis I checked the IMBD and there were only 11 episodes at 42 minutes each. So it is the entire season. I am a die hard fan and hope this show keeps going. I read in TV guide they are not sure is it will renew or not but it is a solid performer for ABC. One of the BEST shows on TV. Love the characters, the writing, plots and the acting is great. You can't help but get involved in each of the characters' lives. I have all seasons, with the exception of Season 5 which will arrive in 5 days.
10 people found this helpful

Kaitlyn ChaseReviewed in the United States on October 5, 2018
4.0 out of 5 stars
It is the completed 5th season not volume 1!
Verified purchase
I love this show. I would have rated 5 star however, the volume 1 aspect of it made me hesitant on buying because I couldn't find volume 2. After reading reviews people said it was the complete 5th season so I bought it. After receiving the dvd I did confirm that it is the whole complete 5th season.
3 people found this helpful

aliceReviewed in the United States on August 18, 2020
5.0 out of 5 stars
Rookie blue season 5
Verified purchase
Bills retro media 1 time order my dvd was protected and came quite quickly rookie blue is my favorite

MaureenReviewed in the United States on October 28, 2014
5.0 out of 5 stars
Can't wait for 5th season to come out in dvd set
Verified purchase
I've just started watching this show but already 'addicted' to it. It's exciting, well written and the actors are superb.

I knew, after the first episode , that I had to get the dvds of all the seasons that were available, so I could watch it anytime I wanted.

I've gotten the 4 seasons available and can't wait until the 5th season comes out on dvd.

the dvds play well and are packaged nicely. There are some fun featurettes on the last dvd in each season's set.
7 people found this helpful
See all reviews
Back to top
Get to Know Us
Make Money with Us
Amazon Payment Products
Let Us Help You
EnglishChoose a language for shopping. United StatesChoose a country/region for shopping.
© 1996-2022, Amazon.com, Inc. or its affiliates