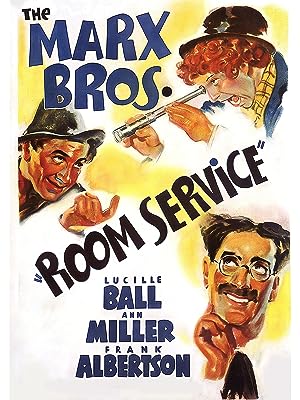 Patrick L.Reviewed in the United States on October 30, 2013
5.0 out of 5 stars
A LEGAL RIOT FOR SURE
Verified purchase
I LOVE THE OLD COMEDIANS. THE MARX BROTHERS ARE CLASSIC WE NEED MORE LILE THEM. I WISH PARENTS WOULD SHOW MORE FILMS LIKE THESE TO THEIR KIDS INSTEAD OF VIOLENT VIDOE GAMES AS SOCIETY WOULD BE BETTER OFF BELIVE ME.THERE IS TOO MKUCH VIOLENCE OUT HERE!AND ON TV.

SURE WOULD LOVE MORE DRIVE BY HAND SHAKES AND HIGH FIVES FOR SURE.

THE MARX BROTHERS NEVER CUSSED OR HERT ANYBODY TOO BADLY AMYWAY. WE NEED TO LAUGH MORE AND THIS ONE MOVIE HELPS YOU DO THAT FOR SURE AND I RECOMMEND IT TO ALL OUT THERE. THEY ARE GREAT AS ALL THE GREAT COMEDY TEAMS, THRE THREE STOOGES, W. C. FIELDS YES WE NEED MORE LIKE THEM AN ERA GONE BY. ALL THE MOVIES "NIGHT AT THE OPERA" "A DAY AT THE RACES" "GO WEST" AND OTHERS ARE GREAT.

SO PUT ON "ROOM SERVIE" SIT BACK AND ENJOY. GET ALL THE MARX BROTHERS CLASSICS AND HAVE A GOOD TIME

N and JReviewed in the United States on March 14, 2013
2.0 out of 5 stars
I LOVE The Marx brothers but this movie was the worst
Verified purchase
I have most of The Marx brothers movies and wanted to add this to my collection after hearing someone rave on how funny the scene is where the Marx Brothers are chasing this turkey around the room. While watching it, it has the normal beginning scene of how most Marx brothers movies begin but the story never really had much humor. Groucho's one liners and jokeful attitude wasn't there. I really felt like they were there for work, like the movie was a means to an end instead of how most of their other movies are, which you see them having more fun and great jokes from them all and wher Groucho puts more into what he's saying and even Harpo didn't have as many gags as usual. But I must say that Harpo did bring his usual zaniness which for me made the movie interesting and without him and the scene where they are chasing this real live turkey around the room and then it flies out the window which was just hilarious to see, without that this movie was not interesting and I probably wouldn't have watched it all the way through. I hate to give The Marx Brothers a bad review because i truly enjoy watching those guys but this movie was a waste of my money.

J.CooperReviewed in the United States on September 6, 2012
5.0 out of 5 stars
Marx Brothers in another of my favorites, and in great COLOR..
Verified purchase
The Marx Brothers were great..and in COLOR..is even better. The colorization is tremendous and makes this film look like it was in color in the first place. The complaints from producers, and directors were well justified originally, when color was added to the early black and white movies.They came out brown and yellow..the rich supreme colorization later did not compare to the first ones. Lucille Ball is a main character here..and they have her hair as red as it was later in the TV color shows she did after LUCY. Lots of slap-stick and fast jokes . If you haven't seen this film, try to get one they have colored..it is worth it..!
One person found this helpful

Josh Reviewed in the United States on March 19, 2021
5.0 out of 5 stars
As Always
Verified purchase
Marx Brothers never disappoint

Manny DiazReviewed in the United States on October 12, 2019
5.0 out of 5 stars
A barrel of laughter.
Verified purchase
This good ole comedy is a good Marx brothers Classic.

rick matherlyReviewed in the United States on June 17, 2019
5.0 out of 5 stars
Very funny movie!!!
Verified purchase
Very funny!!!
See all reviews
Back to top
Get to Know Us
Make Money with Us
Amazon Payment Products
Let Us Help You
EnglishChoose a language for shopping. United StatesChoose a country/region for shopping.
© 1996-2022, Amazon.com, Inc. or its affiliates