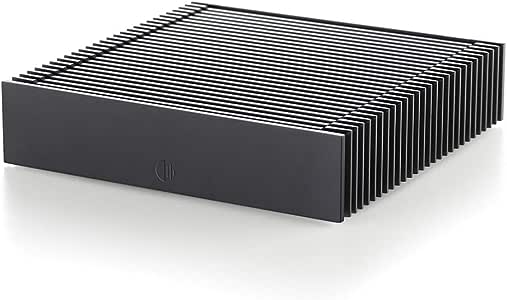 by Roon
4.3 out of 5 stars 10 ratings
| 7 answered questions
Available from these sellers.

Exclusive items from our brands

Nucleus is the center of your Roon music system. It’s the housekeeper, the traffic cop, and the brain that takes care of the music in your life. Using Nucleus, Roon manages all your music – on hard drives, NAS, and streaming content – and allows you to play it on all the audio devices around your home. Nucleus is the best way to run Roon, at any price. Just plug Nucleus into your network, connect your hard drives, download Roon remote apps (iOS, Android, macOS, Windows) and you’ll be ready to play music using a wide variety of audio devices, including AirPlay, Sonos, Roon Ready, Devialet, KEF, Meridian, Squeezebox, and a huge variety of USB DACs. Aside from being a powerful, fanless music server, what sets Nucleus apart is that it’s powered by Roon OS – a fast and lightweight operating system optimized to do just one thing: browse and play music. Roon is a multi-room, multi-user networked audio platform built to the exacting standards of audiophiles, so it offers features like bit-perfect playback, DSD and PCM upsampling, multichannel playback, and signal path display.

All returns of opened products for reasons other than manufacturer defect or damage in shipping will incur a 15% restocking fee and you will be responsible for the cost of the return shipment.

4.3 out of 5 stars
4.3 out of 5
10 customer ratings
How does Amazon calculate star ratings?
Amazon calculates a product’s star ratings based on a machine learned model instead of a raw data average. The model takes into account factors including the age of a rating, whether the ratings are from verified purchasers, and factors that establish reviewer trustworthiness.
Top reviews

TheraP
5.0 out of 5 stars If a 75 year old Luddite can, so can you! Customer Service is outstanding if problems arise.
Reviewed in the United States on January 25, 2020
Verified Purchase
This Nucleus is a great, easily connected piece of hardware. The sound of music, when the Nucleus is connected via Ethernet to the Router and then via USB to my McIntosh Receiver, is delightful! Perfect!

It’s a lovely piece of hardware. And this old lady even managed to install the SSD inside it. In addition to connecting everything up.

Haven’t done it yet but I have an external CD drive which can connect to the Nucleus as well - for ripping our CD collection. And then I can play that directly using the Nucleus and Roon software which will catalogue everything for me.

UPDATE (4/25/2020): The device has stopped working today. Cannot connect to the internet, except briefly, if I plug and unplug. I’ve tried everything.

UPDATE (4/27/2020): There was an almost immediate email response when I notified the seller of my problems - on a Sunday! With a promise to assist me. If necessary with paying for shipment back to them, repair or replacement included (as it’s still under warranty). That is a great comfort to this old lady (Luddite). Though I will also praise the Roon Community which tried to help as well yesterday.

This is the amazing thing about Roon. If you buy this product you have backup. And wonderful ordinary citizens around the world!

Andrew O
1.0 out of 5 stars About $700 too expensive
Reviewed in the United States on July 20, 2020
Verified Purchase
To be fair, it works exactly as described - a "turn-key" Roon core. However, it's rather pointless to pay that much money simply for the case. Yeah, it's silent, blah blah blah, but it's important to note that as it's configured, you *won't be using it as a source (ie, the internal NUC's usb or through HDMI). As such, save yourself a ton of cash and just pick up a suitable NUC (using Roon's own list of compatible hardware) and connect it to your network somewhere away from your listening area. The only thing moderately complicated about a ROCK install is the BIOS tweaks, but that too has been adequately documented. NUC prices continue to go lower as time goes on, but the Nucleus' price sadly doesn't reflect that (they've already sunk the money on the board). Look, I dig Roon and their work, but if you're considering a ~$1,400 Nucleus, just buy a NUC, install ROCK on it, and with the money you save, pick up a lifetime membership to Roon's service (with some left over for Tidal or Qobuz).. you'll be happy you did.
------ *EDIT/CORRECTION ------
As another reviewer pointed out, apparently you can connect a Nucleus directly to a DAC and use it as a streamer; I never bothered trying that under the assumption its NUC's USB would simply be too noisy from crosstalk. While I can't definitively declare noise (folks' power "cleanliness" differs, after all) my guess is that if the possibility of such distortion doesn't bother you, a wee bit of fan noise (if any at all!) from a NUC with ROCK installed on it shouldn't bother you either. As such, I still stand by my recommendation to get a suitable NUC, install ROCK, and save a ton of cash.
Lastly, I figured it might be useful to mention what I ultimately went with (after gratefully returning my Nucleus): NUC 8 i7 (with ROCK) in an HDPlex fanless case. I use it as a streamer by way of an independently powered Matrix Audio "Element H". And for what it's worth, I am not employed or associated in any way with any of those vendors.
Read more
2 people found this helpful
Helpful
Comment Report abuse

Stevarn
5.0 out of 5 stars If You're Sold On Roon, You Won't Regret It!
Reviewed in the United States on April 6, 2020
Verified Purchase
I had been using a MacBook Air as a Roon core but decided to splurge on this purpose built Roon device because I got tired of always having to play around with my Mac's settings when there was either an Apple or Roon update. With the Nucleus, I never have to think about updates because they're downloaded automatically without any input from me. I like that because although I've been an audiophile for decades, I am digitally challenged.
Read more
2 people found this helpful
Helpful
Comment Report abuse

Steve Huff Reviews
5.0 out of 5 stars SO PERFECT!
Reviewed in the United States on July 6, 2020
Verified Purchase
I could have spent less and but my own "nucleus" but that would have had a fan, hence noise. It would have had flashing lights to annoy me. It would not have any support. I am so happy I spent the money for the Nucelus as it has been astounding and allows me to run it right to my USB dac inside of my Vinnie R Rossi L2i SE. This sounds better than when I had a $5k streamer setup and is so much faster, simpler and rock solid. I use ROON of course and if you go that route, this is a MUST! Hassle free, auto updates when needed, silent as a sleeping mouse, fast operation, and allows me to stream Tidal and Qobuz direct from ROON with speed and zero issues. Allowed me to sell my streamer and put money back in my pocket as well. Again, if you have a USB DAC this is a streamer as well, and a VERY NICE ONE when it comes to sound quality. Five stars all the way and WELL worth the cost in this crazy world of High end audio.
Read more
Helpful
Comment Report abuse

MD 7562
5.0 out of 5 stars Finally optimized my streaming music approach
Reviewed in the United States on January 28, 2020
Verified Purchase
Bought a Trinnov Altitude 16 and discovered the "Roon" feature I had not been familiar with at the time. While I love Apple for what they did with iTunes, over time I think they just messed it up. Along with friends, I have come hate Apple Music and was so glad to dump it. Fortunately, the weeks and weeks of burning my CD-based music and previous HD Track purchases were easy to import to the new system. I popped a good-sized SSD drive into the Nucleus and also attached a external SSD drive with all of my legacy music. The Nucleus simply does what my older MacBook Pro laptop did as well and is quiet and runs cool. Now with Roon and Tidal, I find I'm listening to more music and appreciate the CD or higher resolution music Tidal offers. Now I have great audio to integrate with probably the best pre/pro money can buy in the Altitude.
Read more
Helpful
Comment Report abuse

HumbleMan
4.0 out of 5 stars overpriced product
Reviewed in the United States on June 1, 2020
This is a good product, I am pretty sure. However, it is way too overpriced for what it can do. If you are ok with building a computer, you can purchase an Intel NUC and install the ROCK software into the NUC.
The total cost of that entire project is around $500 (assuming you buy everything new).
If you are more diligent, you can search around eBay for a used NUC for under $300. That will also be qualified as a Roon server.
No need to spend over $1000 for a Nucleus even if you are rich. Just my 2 cents.
Read more
3 people found this helpful
Helpful
Comment Report abuse
See all reviews from the United States
Pages with related products. See and discover other items: Explore Wireless Multiroom Digital Music Systems